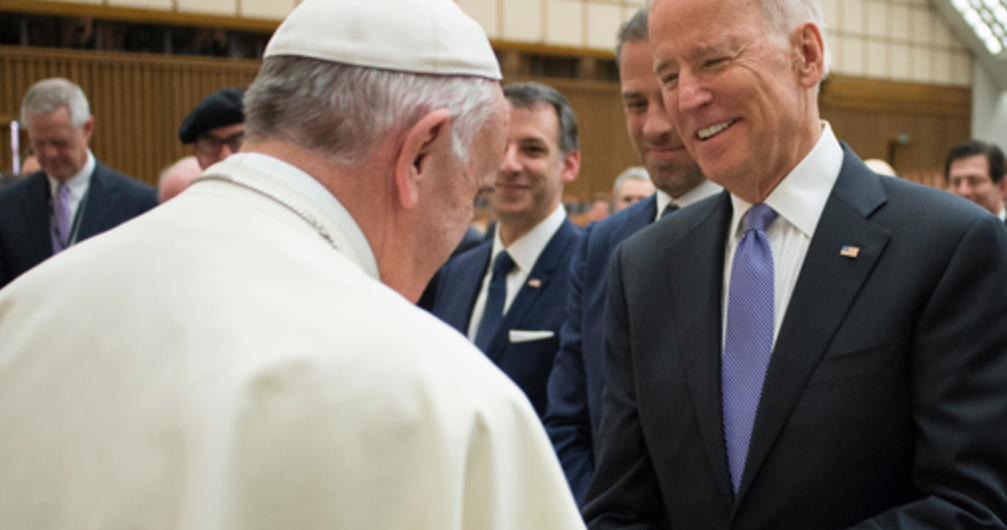 On January 20th, Joe Biden will become the second Catholic president elected into office. Just 60 years after John F. Kennedy’s inauguration in 1961, Republican acknowledgment of Biden’s Catholic affiliation has been pushed under the rug amidst his stance on reproductive rights and same-sex marriage. Despite his progressive agenda, Biden is the first president in decades to regularly attend Sunday mass, in stark contrast to President Trump who rarely attends church unless it is an organized PR event. Regardless, Trump boasts a strong backbone of Protestant, Catholic, and Evangelical voters. Why is Biden’s religious devotion rarely addressed in the media, as opposed to popular and controversial elects like Justice Barrett, Justice Kavanaugh, and former president John F. Kennedy?

The Office of the President has boasted 44 Protestant, Quaker, and non-denominational candidates since its conception. President Kennedy faced anti-Catholic bias and political rhetoric on his 1960 campaign trail. Rather than shying away from Protestant-dense countries, he campaigned heavily in cities like Houston, TX and to gatherings of ministers or congregations. Addressing the elephant in the room on live TV, Kennedy stated, “contrary to common newspaper usage, I am not the Catholic candidate for president.” Gazing steadily at the camera, he assured a flustered nation, “I am the Democratic Party’s candidate for president, who happens also to be a Catholic. I do not speak for my church on public matters, and the church does not speak for me.”

Catholic politicians endured public speculation and widespread suspicion in the 1950s, provoked by mainstream Evangelicals and Protestants. Some went as far to accuse them of having “dual loyalties” to the U.S. and the Vatican. Ultimately, Christians feared that if the soul of a Catholic politician was on the line, he would ultimately follow the will of the Pope over that of Americans. A shared concern pictured Kennedy funneling federal funds away from the public school system and towards private Catholic education or cutting birth control from the healthcare system.

Biden’s religious orientation was rarely mentioned during his 2020 campaign by opponents. Unlike Justices Amy Coney Barrett or Brett Kavanaugh, criticism of his policies never overlapped with his personal faith. Biden’s progressive agenda, especially in supporting pro-choice and pro-gay marriage policies, distinguished him from typically conservative Catholic candidates like John Boehner or Paul Ryan. The Republican strategy for winning over the Christian vote revolves around painting Democratic candidates as anti-religion. Regardless of Trump’s extensive history of adultery and infrequent attendance at church services, he appealed to evangelicals by using a dictionary of religious language against his contender. His promotion of the “traditional family” and an “evangelical worldview” aligned with his nomination of religious candidates to the Supreme Court. However, in trying to out-Catholic a Catholic, Trump unwittingly directed national attention away from Biden’s religious background and the Democrat avoided anti-Catholic sentiment altogether.

Biden’s policies have become more progressive over time as he adjusts to fit the dynamic expectations of the Democratic party. In escaping religion-based criticism, the president-elect succeeds in preventing the interference of church-and-state within his political agenda. Even so, Biden’s religious identity and devotion is woven into his political message. He posed a contrast to Trump, “fashion[ing] himself as the candidate standing up for morality and decency” without loading on the evangelical language. He frequented mass quietly along the campaign trail without turning it into a political event. CNN’s exit polls showed a narrow margin among Catholic voters in the 2020 Presidential election, with Biden at 52% and Trump at 47%.

Conservatives in Washington are wary of Biden’s religious affiliation. The Obama administration’s stance on reproductive rights and fight with Catholic nonprofits in providing contraception coverage makes it difficult to tease out party influence from his individual beliefs. Washington archbishop Walton Gregory looks forward to an “open dialogue” with Biden, admiring his dedication to separating “his personal faith from his political career.” Gregory believes in a big-picture critique of the president-elect, admiring Biden’s “faith [as] reflective of his compassion and empathy, his commitment to the vulnerable, and his service to the country.” As Catholic politicians sweep positions in Washington D.C., 22% of Americans who identify as Catholic gain a level of representation never seen before.