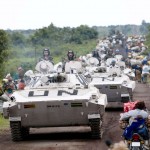 Peacekeeping troops are generally regarded as positive forces in virulent and destabilizing intrastate conflicts.  However a growing number of recent allegations against the  United Nations forces tell a different story. It seems that in a number on conflict zones, the presence of UN forces have indirectly helped small local criminal factions grow into well-organized networks able to usurp state sovereignty.  This holds important implications for state response to ethnic conflict. In the absence of stable mechanisms of governance and rule of law, extremist ideology, graft and fractious social change can lead to further episodes of ethnic violence.

A 2004 Amnesty International and BBC report revealed that immediately following the deployment of UN troops in Bosnia and Kosovo after the Bosnian and Kosovo Wars, there were sharp increases in the proliferation of prostitution and sex trafficking. Furthermore, an internal UN inquiry discovered that peacekeeping forces were involved with a child molestation and pedophilia in the Democratic Republic of Congo in 2006.  (Allegations of child molestation in Mozambique date back to 1996).  The short term consequences of these unsettling findings directly undermine the legitimacy and credibility of the United Nations peacekeeping mandate. Moreover, the nature of such conflicts are inflamed by a complex international component. A lack of credible information concerning the nature of the violence and the critical needs of targeted populations on the ground, can stymie an effective international response. Yet the implications for long term security and economic prosperity in war ravaged nations like Bosnia and Kosovo are a more concerning byproduct of a sullied peacekeeping mandate.
The Amnesty International report underscores the dubious business of international peacekeeping and security. Where the presence of UN troops may cause a major rise in the criminal activity, such actions hold wide-reaching implications for the ability of the international community to effectively mitigate genocide, once small groups of unorganized gangs  blossom into coordinated criminal networks with international clout. The demand for prostitutes has increased the trafficking of women throughout Eastern Europe and Africa. Furthermore, large sums of money have been funneled into the coffers of criminal organizations in regions debilitated by genocide and ethnic strife. According to The New York Times, in 1999 there were only 18 places where one could purchase sex, in Prishtina, Kosovo’s capital. By 2003, this number had swelled to 200.
Moreover, the compensation of UN troops that hail from the West are paid much better than the average person in the countries in which they are deployed. The BBC reported that trafficked girls are “sold from one trafficker to another for prices ranging from 50 to 3,500 euros ($60 – 4,200).” Now imagine these large sums of money flowing to human traffickers, pimps, and bordello owners. The redirection of payments designed to support peacekeeping efforts enable criminal networks to purchase their own security and pay off government officials. Amnesty International has also reported that “international personnel make up about 20% of the people using trafficked women and girls even though its members comprise only 2% of Kosovo’s population.”
In the long term, these high powered criminals threaten the peace and stability of states already burdened by domestic conflict. Humanitarian intervention missions’ ability to deliver conflict resolution are complicated by a variety of forces. Belligerents may often blend into civilian populations and masses of refugees fleeing conflict zones, complicating efforts to protect targeted populations.  In addition, humanitarian forces must also cultivate the trust of local populations and be able to work with stable state mechanisms to effectively deliver aid, which can often be intercepted by perpetrating groups.  Peace is often maintained during periods in which forces remain in the country.  It increasingly appears as if UN forces are only able to provide temporary peace, and ensure long term instability.

In East Timor, the issue of state sovereignty severely undermined UN force’s ability to end the conflict.  If force is delivered without any semblance of aid, the country in question may perceive intervention as a threat to its territorial integrity and sovereignty.  Furthermore, unilateral intervention has been viewed with great skepticism by the international community. When operating during the de-escalation phase of conflict, it is prudent for these missions to quell a culture of armed conflict and to promote cease-fire agreements between conflicting parties.  Thus, if these missions happen to overstep the bounds of their operating charter, by demonstrating a degree of impartiality or failing to obey cease-fire lines, violence can quickly erupt. The allegations of criminal activity presented in the Amnesty International report only augment this conflicting mandate.
Following the withdrawal of UN troops, nations often experience periods of relative political and social stability, which masks a long-term security dilemma. During these critical periods of transition, the nation will be at its weakest security and economic position. The growth of criminality will tax the nations few resources, and weaken their position even further. UN troops can also hinder the creation of legitimate and productive forms of commerce in the regions in which they are deployed.  The impermanent and often rapid nature of their deployments desensitizes them to the long-term social and economic effects of their presence. The troops often have a lot of funds, and nowhere productive to spend it. As a result, prostitution, gambling, alcohol and drugs providers benefit. This problem is only pushed further by an unwillingness of the UN governing body to investigate many of these allegations.