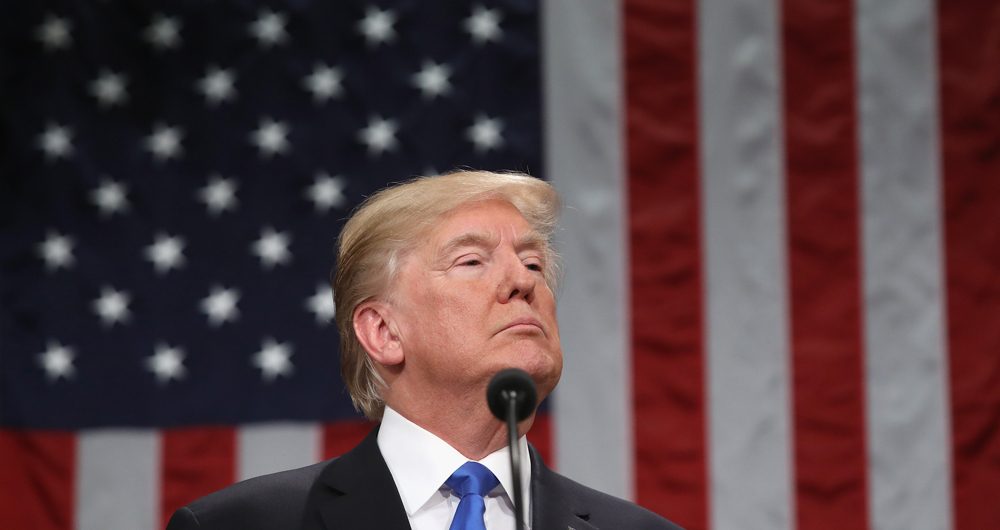 On January 30th, President Donald Trump delivered his 2nd State of the Union address. There was much speculation on whether or not he would “stick to the script”, what angles he would take, and how he would address some of the core issues currently causing partisan friction in Congress, namely immigration. Unsurprisingly, the speech was problematic in several areas, namely, the self-congratulatory presentation of issues with questionable follow-through, the embellishment of what should have been straightforward facts, a failed attempt at bipartisanship, and use of special guests to distract from these flaws.

It is not unusual for presidents to use the State of the Union to bask in the glory of the bully pulpit. Trump was certainly no exception, pausing to encourage applause for himself at several points throughout the speech (incidentally, the hour and twenty minute speech included over twenty-five minutes of applause) and spending a significant portion of the beginning spouting off questionable statistics and ideas about how the country has improved since he has taken office. A clear example was his discussion of ending the “war on energy”; this implies that there is some way for America to rely as heavily as it does on the coal industry without releasing greenhouse gases. When the term “clean coal” was first introduced in scientific literature, it referred to a process that released fewer of these gases by capturing and storing the carbon dioxide emissions from coal mining. However, there are two main complications with this process: firstly, it is a fairly short term solution, because the reservoir being used has enough space for only fifty years of carbon dioxide emissions. Secondly, it increases the cost of the coal-mining process significantly, while clean energy methods are becoming cheaper by the day.

Beyond the presentation of the speech, there were some simple facts that were exaggerated at best, and fabricated at worst. For example, when describing the third pillar of his immigration plan (more on this later), Trump described our current visa lottery system as being far more random than it actually is, failing to mention the fact that it has preconditions which account for immigrants of underrepresented countries and require a certain level of education or labor experience. His discussion of the automobile industry was also rather faulty, saying that we have not seen the building of car plants in America for companies such as Hyundai and Toyota in “decades”. Not only has this been occurring for quite some time before his presidency, but plants were not necessarily moving from other nations to America as Trump suggested, but merely expanding with America as an addition to their other locations. It is odd that Trump would bring this up in the first place, because to the educated listener, it would demonstrate that although American jobs are not going overseas, foreign companies are taking them (such as the Japanese Toyota and South Korean Hyundai), something that Trump has been adamantly against since his presidential campaign.

Like every president since Ronald Reagan, Trump’s State of the Union featured several special guests. Every year, it proves difficult to watch the president recognize people, who are often victims of some tragedy, for their struggles. While some guests made sense, such as Corey Adams, a welder from Ohio who will definitely benefit from a tax policy action Trump is taking, others simply came across as pure exploitation and distraction with a lack of substance. Perhaps the most prominent example was the presentation of Ji Seong Ho, a victim of what can only be described as blatant citizen abuse by the North Korean government. Obviously, the point of Ho’s presence was to re-emphasize the horrific nature of what the North Korean people must endure and why someone would suffer as much as he did in order to escape. While one certainly should not and cannot criticize the honoring of such a tragic hero, Trump’s presentation does bring up the question: what is America going to do about it? Yes, Trump discussed building up America’s nuclear arsenal, but was there any specific solution mentioned for how to address these human rights violations? Not in particular, and Trump’s tactic on this issue is quite transparent. North Korea is unquestionably on most news-watching Americans’ minds, especially with recent bomb threats towards territories such as Guam. Trump knows that any American with half a heart despises the way the North Korean government treats its people, so he fed into that, distracting everyone by invoking some completely understandably intense pathos and not actually addressing the issue the distraction surrounded.

Towards the end of his speech, Trump decided to address his plan for DC’s current hot topic: immigration, and more specifically, Dreamers, the approximately 800,000 immigrants who arrived to the US as children and applied for DACA. This was the first of Trump’s “concessions” to the Democrats, offering a pathway to citizenship for 1.8 million Dreamers. The second “pillar” of the plan accounts for a $25 billion budget for the infamous Mexican border wall and tightening border security, a nod in the direction of the Republican Congressmen and voters who jumped on his campaign so early on because of this promise. The third aspect ends the visa lottery– something which, as mentioned before, Trump fudged the facts on– and shifts towards a merit based immigration system. The final part, and aspect that really angered the Democrats, “protects the nuclear family” by ending chain immigration, limiting immigration sponsorship to spouses and minor children. Trump presented the entire plan as being almost a peace offering to the Democrats, something to resolve the tensions that created the drastic government shutdown that ended only days before the address. However, he simultaneously communicated the inflexibility of the plan and the absolution with which these four pillars must be carried out. While the bill may have aspects that appeal to each side of the aisle, it is much more of an oil and water sort of deal than a middle-of-the-road compromise. Republicans are furious with the number of Dreamers being offered a pathway to citizenship, and Democrats insist that Trump is taking a cruelly nationalistic approach when it comes to the issue of chain immigration. Therefore, the likelihood of this legislation being passed before the rapidly approaching March 5th deadline is shrinking with each passing day as each party grows more and more stubborn. The partisan divisions that Trump pitifully attempted to overlook were further emphasized by many Democrats wearing black, honoring the “Me Too” movement in the face of a president who has been accused of sexual assault, and even more so by the presence of many Dreamers as Democratic Congressmen and Congresswomen’s special guests.

While Trump’s State of the Union certainly carried the negative traits of America’s average presidential address, he did give it his own special twists. The poorly supported ideas, jumbled facts, questionable presentation of guests, and failed attempt at bipartisanship were only a few examples of the flaws his speech held. Aside from his immigration plan, Americans received almost no deliverance on solid policy plans, and Trump’s oh-so-familiar, overriding theme of “America first” and making our country great again often came off, in his typical way, as close-minded and elitist. The anger of the Democratic side of the room mirrored the frustration that millions of Americans felt, watching their leader make what was essentially an unfulfilling, ambiguous, and blundering State of the Union.