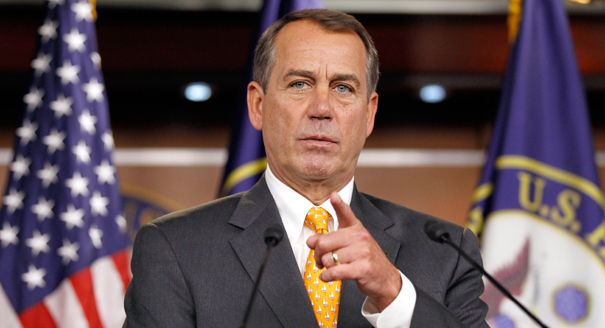 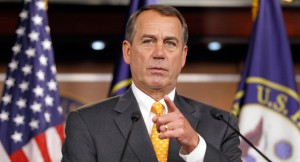 House Speaker John Boehner often finds himself the center of attack, even at the hand of those in his own party. New Jersey governor Chris Christie recently hammered his fellow Republican for not holding a vote on a Hurricane Sandy relief package the night of the fiscal cliff deal: “There’s only one group to blame…the House majority, and their Speaker, John Boehner,” as Christie put it. Nine Republicans, incensed over Boehner’s decision to back the said fiscal cliff deal, voted against his re-election as Speaker to the 113th Congress in early January. Although Boehner won re-election to the Speakership, he lost the respect of the far right. While the more conservative wing of the House of Representatives has long been suspicious of the moderate Boehner, this suspicion has evolved into outright distrust ever since his endorsement of the fiscal cliff deal. Breaking legislative tradition, the Speaker voted for the package even as it raised taxes on individuals who make $400,000 or more and on couples filing jointly who make $450,000 or more. Had the House not passed this bill, the Bush-era tax cuts of 2001 and 2003 would have expired across all income brackets and comprehensive spending cuts, which almost certainly would have sent the economy back into recession, would have been enacted. A considerable group of hard line conservatives, adhering unconditionally to the Republican opposition to tax hikes, were willing to see tax rates increased on all American citizens in an attempt to gain leverage in the tax battle against President Obama. Speaker Boehner, on the other hand, was unwilling to see millions of struggling Americans lose any more of their take-home pay to taxes. In stark contrast to many conservatives, who seem to view American workers as hostages with their uncompromising tax ideology, Speaker Boehner deserves praise for participating in responsible government.

Of course, the fiscal cliff deal did not really accomplish much. President Obama’s wish to raise taxes on the rich came true, but the resulting revenue increase—$620 billion over the next ten years—will not have a significant impact on the federal deficit. The $600 billion in combined spending cuts to defense and domestic programs—known as the sequester—was postponed, paving the way for another round of political brinksmanship. Perhaps the only development of any substance coming out of the deal is the newfound contempt of the far right towards their Speaker. Shameful really, since Boehner was one in a small group of Republicans (including Paul Ryan and Mitch McConnell) who actually showed common sense and voted yes during the fiscal cliff roll call. Norquist hawks and Tea Partiers in the House were unrealistic in thinking that a rejection of the bill would force President Obama to capitulate to their tax demands. Such a rejection would send the nation over the cliff, and would have given the president the ability to place the blame solely on Republicans. Such a move would destroy Republican credibility, already hampered in the aftermath of Mitt Romney’s defeat last November. The fiscal cliff deal was certainly not ideal, but it was much better than the alternative—a tax hike across all income brackets, a blind cut to defense and domestic problems, and a tumble back into recession.

John Boehner hates the idea of raising taxes on working Americans as much as the next Republican, every GOP member who voted yes on January 2nd does. Given the circumstances however, Boehner simply could not say no. Consider the political context. The consequences of going over the cliff have been documented. President Obama had just won an election that he ran on a pledge to raise taxes on the “wealthy.” Republicans, touting a platform of lower tax rates, garnered a losing presidential candidate and lost seats in both the House and Senate. Elections matter, and on this issue the public was largely in President Obama’s corner. Not passing the Senate’s version of the fiscal cliff deal would have been akin to political suicide for Republicans. Luckily, Boehner was willing to do what was right for the country even if he is now unfairly the center of unwarranted criticism.

Republicans should be thanking their Speaker. In addition to preventing a cliff dive, Boehner’s efforts bore a more palatable tax hike than initially proposed. President Obama’s revenue demand was at first aimed at those making only $200,000 or more each year (and couples filing jointly making $250,000 or more). After the president’s re-election, Boehner spearheaded Republican opposition to higher rates, favoring instead the closing of various loopholes in the tax code as a means to increase revenue. Even though Republicans only control one-third of the government, the Speaker’s proposal, while in no way acceptable to Senate Democrats or to the president, did force President Obama to lower his tax revenue demands to $400,000, enshrined in law ever since the bill’s passage. That is how American democracy works. Not acknowledging the other side’s right to govern is disruptive, and given the circumstances, Obama’s new base line of $400,000 a year was reasonable. Although in essence a symbolic gesture at best, the steep tax hike was lessened to appease a minority party. While certainly not ideal, the package was the best deal Republicans were going to get. This sentiment started to resonate among certain House members as the New Year approached. One such congressman, Minnesota Republican John Kline, summed up the home stretch of the debate: “absent action, we are going to be faced with a huge, huge tax hike.” Kline’s fears never came to fruition, however, since Speaker Boehner courageously did what the country needed most: he orchestrated a compromise.

Every aspect of the fiscal cliff deal highlights the incompetence of American politicians over the last several years. The cliff was created in the wake of the debt-ceiling crisis two summers ago as a deterrent. Legislators had the option either to craft a long-term deficit reduction strategy or suffer a gauntlet of tax hikes and spending cuts on January 1st, 2013. Congress waited until the very last minute to address the fiscal cliff as the Senate did not pass a bill until the last day of December and the House did not approve it until the cliff’s deadline. During the early hours of January 2nd, President Obama signed a bill, The American Taxpayer Relief Act of 2012, that garnered insufficient revenue levels, raised taxes during a slow recovery, and punted the sequester. However, the bill did prevent tax hikes on the majority of Americans. This would not have been possible without the beneficial contributions of Speaker John Boehner. Though Speaker Boehner was just as much an opponent of tax hikes as were most members of the GOP, he realized that failure to pass this bill would wreak havoc on the U.S. economy. Speaker Boehner deserves a lot of credit for overcoming his own party’s opposition to the bill and doing what was right for the country. The American people should be grateful toward their Speaker, and I personally am pleased to have him represent my party as Speaker of the House.

23 thoughts on “A Defense of John Boehner”