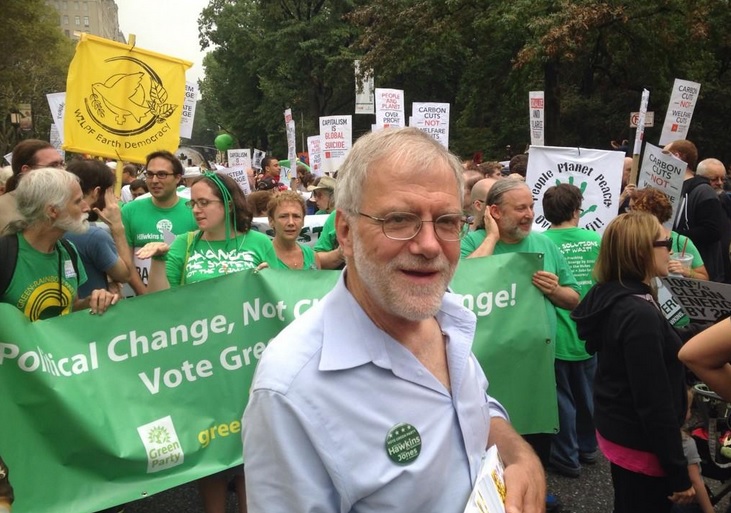 Following last Tuesday’s statewide primary election in New York, the candidates for the November 4th general election are set. A significant amount of media attention (much of it coming from the New York Times) focused on the Democratic Party gubernatorial primary, in which incumbent Governor Andrew Cuomo won a less than convincing victory over challengers Zephyr Teachout and Randy Credico. In the aftermath, the general election has been painted as simply a contest between Cuomo and Republican nominee Rob Astorino, the Westchester County Executive.

However, such an assessment is quite incomplete. A third, progressive candidate is also on the ballot, one who figures to draw a sizable share of the vote: Howie Hawkins of the Green Party.

Andrew Cuomo is running on the Democratic Party, Working Families Party (WFP) and Independence party lines. (The WFP nomination secured only after backroom deal-making, aided by Mayor Bill De Blasio). As governor, Cuomo has generally been considered to have “centrist” or “moderate” economic positions, though a more accurate label would be neoliberal, the main tenets of which are deregulation, privatization, and cutbacks. For example, Cuomo has created a program called START-UP NY, establishing tax free zones for new or relocated businesses, essentially allowing them to benefit from state and local services without paying for them. He has advocated for the corporatization of education through his support for charter schools and the Common Core. In addition, under Cuomo, the state has withheld funds from school districts in need, while at the same time imposing a property tax cap making it difficult for districts to cover costs. These policy positions, when placed alongside Cuomo’s governing tactics, in which he orchestrated Republican control of the state senate and meddled with his own ethics panel, do not paint a very flattering picture. The bottomline is that Cuomo is an opportunist politician, seeking to build his own power (with sights likely set on a future presidential run) by furthering the interests of his corporate backers, as will be seen.

Rob Astorino, running on both the Republican and Conservative party lines, has been rightfully labelled as a “hyper-conservative” by Cuomo. Astorino unequivocally supports lifting the state’s moratorium on hydraulic fracturing. He opposes both same-sex marriage and abortion. He also is strongly against the SAFE Act, Cuomo’s signature piece of gun-control legislation. However, Astorino shares some interesting similarities with Governor Cuomo. Like Cuomo, Astorino faces scrutiny from U.S. Attorney Preet Bharara. The issue stems from a housing desegregation settlement carried out while serving as Westchester County Executive. Also, Astorino’s economic proposals differ only in details from Cuomo, similarly focusing on using tax incentives to attract business. In fact, the main difference is that Astorino’s plan doesn’t go as far as Cuomo’s tax free zones.

Howie Hawkins, the Green Party nominee, is a vastly different candidate. Hawkins has been an organizer and activist since the 1960s. His platform, entitled “A Green New Deal for New York”, is radically different from those of the state’s corporate parties — the Republicans and Democrats. In sharp contrast to Cuomo, he opposes the privatization of the school system as well as the corporate testing regime established by Common Core. Unlike Astorino, he seeks a permanent ban on fracking and a full transition to clean energy by 2030. Most importantly, Hawkins rejects the neoliberal policy of cutting taxes on the wealthy, calling for a tax hike on the top 5% of earners, on Wall Street, and on the fossil fuel industry in the state. These are not fringe positions. Polling shows that 49 percent of New Yorkers oppose the implementation of Common Core. Another shows that 48 percent are opposed to fracking. Additionally, 51 percent support the legalization of marijuana, another position held by the Hawkins campaign.

Despite this, and due in no small part to media bias against third-party candidates, the very existence of the Green Party campaign of Howie Hawkins and his ticket is hardly known. In fact, a recent Quinnipiac poll shows that only 11 percent even know enough about Hawkins to form an opinion of him. This same poll shows Hawkins drawing 7 percent of the vote of the electorate, indicating that the majority of those who are aware do support him. A major root cause of this lack of visibility is the massive disparity in campaign funding. Cuomo’s war chest has been reported to be in the range of $35 million. On the other end of the spectrum, the Hawkins campaign lauded the fact that it had already raised more money than during its 2010 campaign — a sum of less than $50,000. The vast majority of Cuomo’s donations derive from ultra-wealthy individuals and corporations, reportedly including the Koch Brothers. Meanwhile, on principle, the Green Party refuses to accept any donations from the 1 percent.

Studies have shown that the modern-day United States is not a true democracy, but rather an oligarchy largely controlled by the wealthy elite of this country. The root of this problem is the way the nation’s elections are conducted. Relatively modest campaign finance laws have been decimated by recent Supreme Court decisions, namely Citizens United v FEC and McCutcheon v FEC. The product of this now weakly regulated process has been a mass-proliferation of money into the coffers of candidate campaigns, as well as into “independent” PACs and super PACs working on their behalf. Most of these efforts are concentrated into advertising blitzes propping up one candidate and attacking another. The general outcome is that in a race that is in any way competitive (an increasing rarity in its own right), the candidate who can get the most out of their advertising dollars will win.

The media itself is complicit in this process. The massive concentration of media has resulted in just a handful of corporations controlling the vast majority of America’s news organizations: Comcast, 21st Century Fox, Walt Disney Company, CBS Corporation, and Time Warner. These organizations are profitable because of their ability to attract ad dollars from still further corporations, who generally have their own interests to look out for. It is not in the best interests of these organizations to give a voice to an anti-corporate agenda; thus it is largely shut out.

The result is the creation of vicious cycle. Corporations fund candidates and their allies in order to win elections. They also fund media organizations in order to shut out opposition voices from public debate and news coverage, and create an expectation that these dissidents should not have a public platform (take for example Astorino’s attitude toward the Hawkins campaign). The corporate-backed candidate who wins the election, now beholden to their funders, pursues policies that support the interests of the wealthy elite. In addition, many of the bureaucratic institutions of government, which are designed to draft and implement executive regulations, have “former” corporate officials in positions of great influence (for example, the noted pipeline between Goldman Sachs and the U.S. Treasury Department). Why then should anyone be surprised with the cynicism of Americans toward the electoral process?

The Hawkins campaign is running on a platform designed to introduce wholesome democracy into our electoral system. By calling for full campaign finance reform, the candidacy seeks to allow for true debate on issues not on the corporate agenda, such as single-payer health care, a 100 percent clean energy system, and economic security for all. A system of proportional representation would break the scourge of gerrymandered districts and encourage the growth of dissenting third-party movements. Instant runoff voting would allow voters to support third-party and independent candidates without feeling their vote will be a “spoiler” (the most infamous case being Nader votes in Florida in 2000). Such seemingly radical measures would genuinely transform New York state (and, implemented on a larger scale, American) democracy in a way that finally serves the interests of the voters and limits the influence of the corporate oligarchy.

In addition, transformation of the economic system would further break the hold of the wealthy elite and empower so many who are currently disenfranchised and disillusioned. The Hawkins platform calls for a state bank to reinvest in the people of New York, as well as a public energy system to move the state away from serving the interests of the extractive industries and the exploitative, undemocratic utilities. Yet perhaps the most controversial aspect of the platform is the call for consumer and worker cooperatives, which are already operating successfully in New York on a small scale. In short, unlike even the “reformist” Democrats, the Green Party desires of a truly participatory democracy, both economic and political. This is what our state needs, and this is what our country needs.