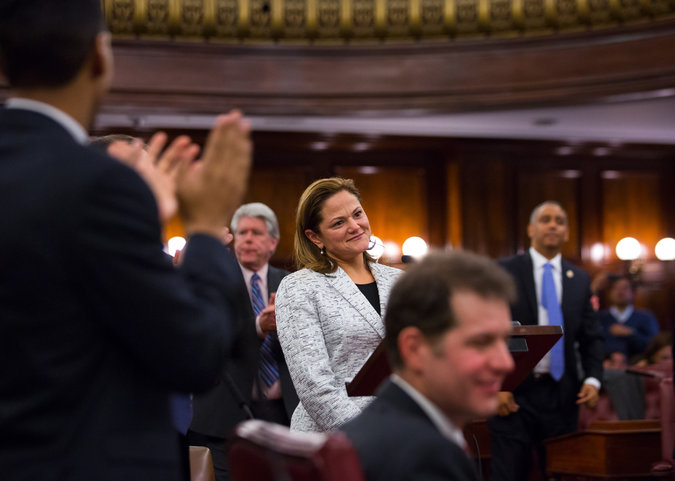 With ultra-liberal Bill de Blasio winning in a commanding fashion on November 5th, we can now turn our eyes to the second most powerful position in New York City: the Speaker of the City Council.  The race for 26 City Council votes has essentially narrowed down to the four candidates, Melissa Mark-Viverito (Manhattan/Bronx), Mark Weprin (Queens), Dan Garodnick (Manhattan), and Jimmy Vacca (Bronx).  All four represent different interests, endorsements (even if unofficial), and factions of power.

The general election showed quite an impressive shift in power in New York City politics from the general centrist old guard with the likes of Christine Quinn to the firebrand liberal labor hero Bill de Blasio.  The same shift in power is quite possible within the speakership race as well.

Originally, county political bosses who made back-room deals regarding commission chairs and the exchange of certain powers chose the Speaker of the City Council.  However, this process could be upended soon due to the formation of the Progressive Caucus tied with the more powerful than ever labor unions.

One of the founding members of the Progressive Caucus, Melissa Mark-Viverito, is one of the frontrunners for the speaker.  Despite being a co-founder of the Caucus, Councilwoman Mark-Viverito has yet to receive any formal backing from the caucus or mayor-elect Bill de Blasio (though de Blasio’s hope for Melissa to be the speaker is well known).

The Progressive Caucus is largely a friend and a representative of not only the more liberal members of New York’s electorate, but also of some of the larger unions that have become ever more apparent in New York City politics.  With the addition of 20 freshmen Council members, the Caucus is expected to grow from its founding 11 up to around 20 thanks to the same liberal wave that carried de Blasio into office.  Of the 20 incoming freshmen, only three did not receive an endorsement from union powerhouses Working Families Party (WFP) or the United Federation of Teachers (UFT).

The roughly 20-member strong Progressive Caucus met on Sunday, November 17th at the Bronx Zoo to discuss the impending speaker race.  They reached an extremely important agreement to vote as a single body for the city council speaker, essentially rendering the old process pointless.  By being only a few votes shy of the 26 needed to choose the next speaker, the Progressive Caucus now essentially has the power to decide the future Speaker of the City Council, barring of course any large organized opposing force within the council.

Should the Progressive Caucus stick to their agreement, the next question will be whom they support.  Melissa Mark-Viverito both co-founded the caucus and is likely favored by mayor-elect de Blasio for her very progressive appeal.  Unfortunately for her, she has been a somewhat difficult member of the Council to work with, especially when she became very outspoken about being redistricted to represent part of the Bronx along with her original East Harlem.

Complaining about being redistricted into the Bronx could end up hurting Mark-Viverito considering the county bosses will still have some sway if the Progressive Caucus is not as audacious in their potential defiance. Carl Heastie, leader of the Bronx County Democratic party, could be one of the county bosses with some of the stronger power seeing as he also chairs the NY Assembly Labor Committee, showing off his own union ties.

Should Mark-Viverito, quite obviously the frontrunner at this point, be legitimately challenged, it should be by Jimmy Vacca. Vacca is the most pragmatic individual within the race for City Council Speaker.

The Speaker of the City Council is meant to maintain power within the council and serve as a check to the mayor.   Once legitimate speaker contender, Inez Dickens, commented on the role of the speakership very well when she said that the speaker should not operate “as a ‘yes’ vehicle” for the mayor.  The city council has a duty to have oversight of the administration.

There is discussion about the power of the speaker and whether or not it should be weakened.  Two trains of thought emerge on this issue and prove important to the race for city council speaker.  Melissa Mark-Viverito believes power by the speaker, essentially the power to allocate funds to council members, should be eliminated and funds be given to councils on a need-basis.  Council members like Jimmy Vacca believe the power of the speaker is essential for a legitimately strong council to act as a counter-balance and check to the mayor.

Vacca is my choice for speaker because he has had over six years of experience in the council, he still supports a progressive agenda, and he has a realistic approach to the use of the city council.  Although being listed as a black horse behind Mark-Viverito, Garodnick, and Weprin, Vacca has a strong chance at the speakership due to his ties to various separate entities that all happen to take an especially important role in this race.  He is well liked among the labor friendly Bronx Democratic party establishment and he might have a secret weapon within the potential new members of the progressive caucus: Ritchie Torres.

Torres is the newly elected member of city council representing Bronx’s 15th district.  He is one of the most prominent new freshmen coming into the council in January due to his past work in the office of Vacca as the housing director.  Vacca has been mentioning his close ties to Torres during some of his recent speaker forum appearances.

The race would become dicey if the Progressive Caucus were to break its earlier promise and splinter allegiances.  Weprin has well known alliances with the Queens County political machine, as does Vacca, which could prove problematic for both contenders.

In my eyes, councilman Jimmy Vacca is the only pragmatic choice for the Progressive Caucus, for county bosses, and for New York: he has ties to labor without the need for new relationships to be built, he is a friend of Carl Heastie of the Bronx and Joe Crowley of Queens, and he understands the function of the City Council as a means to represent the people and not solely as a toy for the mayor.

However the race turns out, it will continue to be indicative of the power of the liberal wing of New York City politics and it will be a true test of union power.  If the Progressive Caucus can hold together and show that they are loyal to ideology rather than county bosses then we might have a whole new political game unlike any New York City has seen before.