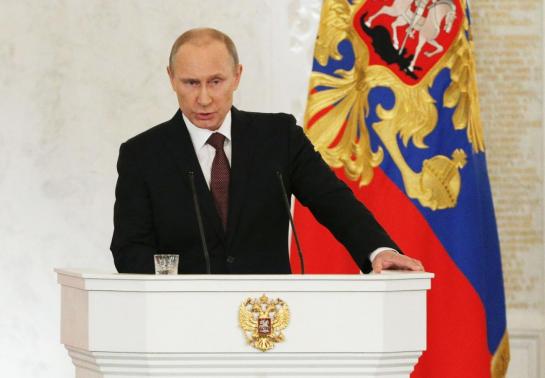 Since the Russian Occupation of Crimea in late February, the US and the EU have implemented sanctions against Russian President Vladimir Putin’s government in an effort to encourage it to change its course. Every time another major event occurs, these countries respond with an additional round of sanctions that range from targeting individuals close to Putin to sanctioning entire sectors of the Russian economy. The conflict has only become more and more entrenched in the eight months since the occupation of Crimea and the Russian-backed rebel uprising in Eastern Ukraine began.

Meanwhile, over 3,500 soldiers and civilians have died in the armed conflict and many more are reported as missing. In addition, over a million civilians have been displaced and the region has suffered billions of dollars of damage. It has become evident that even though the sanctions are harming the Russian economy, it is not stopping the Russian war machine from continuing its aggression in Eastern Ukraine. Western powers have tried to rely on the Kremlin to help construct a peace plan between the Ukrainian Government and the separatists with little success. There is a great deal of evidence proving Russian involvement in the situation including the supplying of arms and personnel to the rebels. U.S. and other international intelligence sources have been indicating the Russian violations of international law with the use of photographic evidence they have gathered. One of the greatest challenges is the presence of Russian soldiers fighting alongside the separatists in Ukraine. Initially, Russia denied any presence of Russian soldiers in Ukraine. However, with mounting evidence, including coffins returning to Russia, the Russian government is now claiming any Russian soldiers in Ukraine are volunteers spending their vacation time in combat.

On September 5, the Ukrainian Government and the rebel opposition leaders announced a peace plan and ceasefire. However, even after the implementation of this “peace plan”, battles have continued and dozens of people have died. In the past few weeks vigorous fighting has surrounded the airport in Dontesk, which is still controlled by the Ukrainian government. Separatist forces have made multiple attempts to take over the airport because this airport is strategically important. They need it to help resupply forces in this area. There have also been reports of fighting near the port city of Mariupol, the temporary capital of the Dontesk Oblast, which stands in the way of the separatist advance. Mariupol also stops the building of a land connection between Russia and the annexed Crimean Peninsula. There is speculation of Russia potentially federalizing the two regions.

Russia has accomplished a significant victory with the occupation of Crimea. The ability to keep their Black Sea Fleet at port in the city of Sevastopol is of great strategic importance to Russia’s military. While they have officially leased space from Ukraine in the past and shared the port, outright control allows for the expansion of Russian military presence. Among the benefits, Sevastopol gives the Russian fleet better access to the Black Sea, the Mediterranean Sea, and the Indian Ocean. Russia plans on building a second naval base near the city of Novorossiysk by 2016 allowing them to add another 80 warships to their Black Sea Fleet, making them the dominant power in the region.

Russia’s interest in Donetsk and Luhansk has to do with the large mining and industrial region it encompasses called the Donets Basin. More than 90 percent of Ukraine’s coal production comes from this region, which employs around 500,000 people, or about 1.1 percent of the Ukrainian population. This is especially important because coal provides about half of the electricity in Ukraine. This region is also the most densely populated area in Ukraine outside of its capital, Kyiv. Together Donetsk and Luhansk’s population of around 6.5 million make up about 16 percent of Ukraine’s GDP and a third of the country’s industrial output. However, industry production has been dropping at a rapid pace. The Ukrainian Hryvnia has dropped to the lowest point in over a decade against the dollar to almost 13 UAH to 1 USD. Every day that the conflict continues to go on, the situation in both Ukraine and Russia worsens. International aid can continue to be offered to Ukraine, but without an end to the conflict, the Ukrainian economy cannot stabilize and the country will continue to need support from the West. It is expected that Ukraine’s GDP will contract by 8 percent by the end of this year and the economic growth to shrink by 1 percent in 2015 as opposed to the earlier forecasts of 2.5 percent growth.

The Economic Impact of Sanctions on Russia

The primary goal of the sanctions strategy was to inflict enough economic pressure on Russia to stop its support of the rebels. Since January, the Russian ruble fell 20 percent against the dollar, Russian GDP growth expectations have fallen to practically 0 percent for 2014, food prices and bank interest rates are rising and foreign investors continue to withdraw funds. The IMF (International Monetary Fund) has estimated that around $100 billion in capital has left Russia in 2014 and this number is expected to increase as time goes by.

The entire Russian economy is hurting but Putin and his inner circle of business partners are staying their course. Russia still has enough reserves to keep its government and economy running for now, but day after day its ability to do so lessens. On October 7, Poland’s Foreign Minister warned Russia that if it does not change its policy towards Ukraine and the separatists, it should expect tougher sanctions from the European Union (EU). The issue is that small businesses and citizens of Russia are the ones that are suffering the most from the sanctions currently in place. One of the theories behind the sanctions is that they will motivate industry leaders and the Russian people to oppose their government and show that this is not what they want. However, there is no established opposition in Moscow and it takes time for economic sanctions to have a significant impact. Most media in Russia is state controlled and it is illegal for people to protest without proper written authorization from the Russian Government. People are afraid to stand up, and many do not even know the true story, blinded by Kremlin Media.

As it is made clear above, sanctions are starting to affect Russia, but many people wonder if it is possible for the West to end the conflict in Eastern Ukraine through sanctions and non-lethal military aid alone. The US and other nations are making significant “investments” in democracy and international security by spending millions of dollars on non-lethal military aid to Ukraine and by providing billions more to support the Ukrainian economy. Will this investment be wasted without the addition of lethal military aid to help Ukraine match Russia’s weaponry? Back in March, the United States Congress agreed to send a $1 billion aid package to Ukraine. Around the same time, the IMF promised another $18 billion to Ukraine and the European Union (EU) promised a $15 billion loan. More recently, Ukrainian President Petro Poroshenko spoke at a joint session of Congress to ask for lethal military aid, saying “Blankets and night-vision goggles are important, but one cannot win a war with blankets.” Even after his request to Congress, the US ended up signing off on another $53 million in aid for Ukraine which only includes non-military items such as radios, armor and night-vision goggles. The West can keep throwing money to aid Ukraine, but this conflict will not be resolved without the Western powers providing lethal military aid. This will continue to drain Western funds because the continuing standoff between the government and the rebels currently occupying parts of Donetsk and Luhansk will not allow the economy to recover.

Russian Involvement in the Region Impacts its Neighbors

Eastern Ukraine can be considered Russia’s door to the rest of Europe. At first, the question was whether Russia would stop after annexing Crimea, and now the question is when Russia will admit its involvement in this war. With sufficient evidence of Russian armor and personnel being used in Ukraine, one can only wonder when Russia will stop hiding behind the “little green men” and admit to being involved as they did in Crimea.

Other former Eastern European countries such as Poland, Latvia, Lithuania, and Estonia are raising alarm about Russian aggression in the region. These four countries are part of NATO and have been getting increased support from the organization. Recently, the three Baltic States, Estonia, Latvia, and Lithuania, have been reaching out to the international community for help. Tensions rose between Estonia and Russia when Russian security forces captured an Estonian security agent and took him to Russia to stand trial for espionage. In return, Estonia arrested two former KGB agents illegally entering the country in October. Latvia has recently been increasing its defense spending including a $64.6 million purchase of 123 armored vehicles from Britain. Russia has also seized a Lithuanian fishing boat with a crew of 30 for fishing in international waters that Russia claims was in their territory. Lithuania has responded to Russian aggression by seeking foreign military aid and increasing its defense and military spending. The Latvian government is worried that the 26.9 percent of ethnic Russians living in their country could raise precedent for an attempt by the Kremlin to “save and protect” ethnic Russians as they did in Eastern Ukraine. Estonia comes in second with 24.8 percent ethnic Russians, while Lithuania only has 5.8 percent.

While sanctions are creating economic pressure on Russia, there is no sign of compromise and Russia is only isolating itself further from the rest of the world. There are many reasons why Putin persists. He has already accomplished what he is doing today in Ukraine in Moldova and Georgia. Putin and his oligarchs have tight control over Russian politics. Control of the media allows Putin to whip up chauvinism for Ukraine by accusing the Ukrainian government of fascism and renaming southeastern Ukraine “Novorossiya”, or “New Russia”. This is consistent with centuries of czarist and communist regimes trying to eliminate Ukraine and its language. For example, back in the 19th century, Alexander II issued the “Ems Ukaz”, a decree banning the use of Ukrainian language in print, education and theater. Putin also fears the spread of democracy into Russia and Ukraine’s closer relations with NATO.

One can only wonder what will happen next. Many analysts are screaming Cold War and that this conflict is the worst between Russia and the US since the Cuban Missile Crisis in 1962. Ukraine has even begun constructing a wall between Ukraine and Russia to keep out unregulated Russian fighters and establishing a legitimate border between the two countries. German Chancellor Angela Merkel warns that there will be a long-term confrontation between Russia and the Europe Union (EU) and the United States. Putin will periodically play games with his troop withdrawals to get the Europeans to reduce or eliminate sanctions. Thus far his track record has not given any reason to trust him. Without leveling the playing field by supplying lethal aid to Ukraine, Putin’s adventurism will continue.