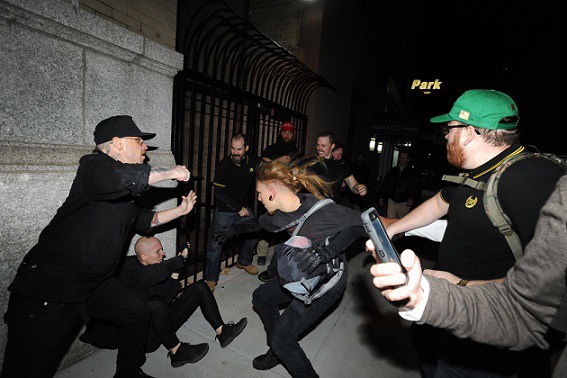 Evident within the past decade or so, perhaps coinciding with the advent of social media platforms and greater media attention to our national political divide, the more radical elements of the right and left have gained major time in the American political spotlight. I am referring especially to the groups known as the “alt-right,” “Antifa,” the “alt-left,” and the like. While these groups are ostensibly ideologically opposed, they nonetheless share common methodological values: a diminished regard for civil discourse, a preference for informal political avenues of action, and on some occasions, a penchant for violence. Here in Manhattan this month, we bore witness to a violent interaction between members of the Proud Boys and Antifa, seemingly provoked by a controversial Proud Boys lecture regarding the 1960s assassination of a Japanese Socialist Party leader (to be clear, New York’s attorney general has attributed the instigation of the violence to the Proud Boys). In the aftermath, a number of arrests were made, and a written warning was issued from Antifa to the Republican establishment that such actions are “merely a beginning” and that “[they] are not civil.” New York Governor Andrew Cuomo has received Republican criticism for not publicly commenting on the role alt-left groups had played in these disputes. A virtually identical violent clash between right and left groups in Portland, Oregon happened soon after, grabbing national headlines as well. While these two events are useful insofar as they are recent and illustrative examples, they are far from unique. This sort of behavior is one that is becoming all too commonplace and is in danger of becoming normalized as we become overexposed to it.

While these widely-publicized engagements have involved both ends of the political spectrum, and are unarguably perpetrated by political extremists, the Democratic Party has not only failed to publicly remove themselves from the milieu, but have more dangerously, allowed senior members of their party to espouse extreme, extra-political actions that allow for the connection of political behaviors, such as those referenced above, to their party. Just this summer, Representative Maxine Waters urged supporters to publicly accost officials of Trump’s administration, encouraging that they be ostracized from public spaces and business. Representative Waters’ prescription, while extreme, is not explicitly violent, but Hillary Clinton recently offered a startling prescription of her own, hinting at an escalation of activity. Clinton, within the context of the Kavanaugh confirmation narrative, posited that “[we] cannot be civil with a political party that wants to destroy what [we] stand for” and that the return to “civility” will be had if the Democratic Party regains control of Congress. Clinton went on to remark that “the only thing that the Republicans seem to recognize and respect is strength,” strongly implying that the Democrats should begin to engage in more forceful tactics. While certainly ambiguous and perhaps intentionally so, Clinton describes action that is forceful for the intent of publicity, intentionally uncivil, and operating outside of traditional political channels: all features of the radical left.

I think that this phenomenon begs the question: is the Democratic Party beginning to wittingly adopt the reactionary ethos of their extremist counterparts? While it’s certainly difficult to totally conflate the fiery rhetoric of establishment Democratic figures with the actions of the left’s more extreme constituents, the lines between the fringe left and the mainstream left are becoming blurred, and the notion of a radicalized Democratic party is becoming an arguable suggestion. Trump and the Republicans’ “Jobs not Mobs” mantra, as we head into the midterm elections, essentially aims to capitalize politically on this suggestion, painting a picture of a left mainstream that has gone too far away from the center. If these drastic actions are incongruent with the contemporary Democratic Party, then it is assuredly in their best interest to shake this association and more vocally separate themselves from the chaos. However, if these types of actions are slowly becoming more acceptable by the party establishment, then we are facing a new, and potentially very dangerous Democratic Party. From an outsider’s perspective, it would appear as if the party is undergoing an identity crisis; fueled in part by the slow intersection of previously separate radical actions and rhetoric, and by the Democratic Socialist movement within the party beginning to gain traction, especially among millennial voters. While virtual Republican control over all branches of government may make the Democrats feel powerless, the long-term consequences of such actions (if they are indeed reflective of the modern Democratic Party), in conjunction with other factors, will undermine the legitimacy of the party as a civil institution in the years to come. A political party willing to discard their traditional values by declaring what is essentially a “state of emergency” when they lack control of any branch of federal government, is perhaps not a party that has any values at all.