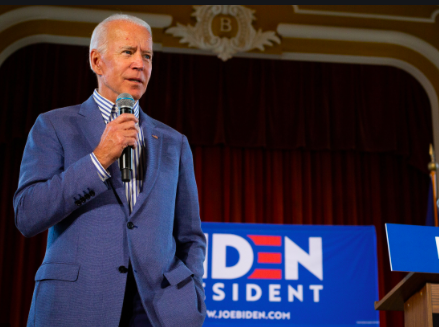 As of early March, Joe Biden is the favorite to win the Democratic nomination for president. The former vice president’s once faltering campaign, aided by overwhelming support from African American voters, won by an unexpectedly large margin (polls going into the primary had him projected to win by around 10 points, but he ended up winning by almost 30 points) in the South Carolina primary and went on to capture a decisive victory over the last remaining competitor, Bernie Sanders, on Super Tuesday. If Biden continues to pick up delegates at similar rates as the primary season goes on in key remaining states like Michigan, Ohio, and Pennsylvania, he will be the one Democrats entrust with the task of taking on Trump in November.

Among the problems of a potential Biden candidacy in a general election is his lack of a clear primary issue that voters can identify with. Quick! What’s Bernie Sanders’ top issue? Healthcare. Easy. How about Elizabeth Warren? You would probably jump to the wealth gap or free state college tuition. The President’s top issue, at least the issue he will base his argument for reelection on, is abundantly clear: the success of the economy. But what about Joe Biden? When you think Joe Biden, what issue do you associate with his candidacy? Healthcare? No, not really. He mainly piggybacks off of Obama’s healthcare system, and his plan still leaves millions uninsured. Perhaps gun control? Biden’s record is solid on guns (look at the 1994 Assault Weapons Ban and the Brady Bill). This might be a substantial issue for him but an extremely embarrassing and unfortunate gaffe on national TV during February’s South Carolina debate where Biden emphatically claimed 150 million Americans have died from gun violence since 2007 (a number that equates to over one-third of the U.S population) hurts his stance. The point is, no one issue stands out as a singular, defining topic for the vice-president’s bid against Trump. Biden’s campaign has been built on arguments centered around a “return to normalcy” from the chaos of the Trump administration, a sense of Obama era nostalgia and his significant experience in Congress and as the vice president. However, in terms of specific issues and policies, Biden’s message seems to be frequently directionless and lacking in momentum. Is a candidate focused on returning the country to the status quo the best equipped one to take on Donald Trump? A certain individual is taking strolls through the woodland trails of Chappaqua instead of sitting in the Oval Office because of that very commitment to maintaining the status quo in an election against the former reality TV star.

The overall enthusiasm surrounding Joe Biden’s campaign isn’t very high. He doesn’t fill arenas around the country with chanting fanatics like the incumbent or draw crowds of over 25,000 like Senator Sanders. Biden could benefit from taking an aggressively progressive approach on a vital issue that is important to democratic voters (and perhaps even independents). For me, the answer is overwhelmingly clear; Biden’s issue should be climate change.

Recent polling shows the rising importance of climate change in the mind of the average American. An article published by the Washington Post in May of 2019 puts Biden’s views in relation to Democratic voters’ views on climate change in context; “In recent CNN-SSRS polling, 96 percent of Democratic primary voters said that it was at least somewhat important to take aggressive action on the climate. More than 8 in 10 said it was very important. Even among moderates, Biden’s biggest base of support in the primary, 78 percent said it was very important.” Support for action against climate change extends beyond the Democratic party. Recent polling shows a record number of Americans believe in anthropogenic climate change (73%), an increase of 10% from 2015. Trump’s policy has been to severely roll back Obama era environmental regulation by withdrawing from the Paris Climate Agreement and publicly reiterating that he does not believe in climate change, despite the near-universal acceptance of the idea among climate scientists and the general wealth of evidence in support of the phenomenon. This attitude taken by the President has not sat well with the public, as two-thirds of Americans believe Trump is not doing enough to fight climate change. If Biden effectively presents the evidence for climate change as a real, existential threat to national security in need of immediate attention, the contrast to Trump’s shocking denial of objective, scientific facts will pay dividends and perhaps even sway some independents and moderate Republicans. It is well-documented that the Biden campaign lacks youth support.  A progressive approach towards reducing fossil fuel emissions could help voter turnout among younger voters.

Biden has had a strong record on climate change in the past. The former Vice President  introduced the first ever piece of legislation aimed at combating climate change in 1986 with the Global Climate Protection Act and boasts an 83% score from the League of Conservation Voters for his support of pro-environment legislation while in the Senate. While some environmental activists criticized the Obama administration for not having done enough to fight climate change, the massive amount of funds provided to the development of clean energy in the American Recovery, and Reinvestment Act of 2009 and the strides made to cut fossil fuel emissions with the 2015 Paris Climate Agreement are environmental policy success stories.

Despite his impressive record, Biden has been inconsistent during his campaign (to put it lightly). The plan laid out by Biden and his team leaves the door open for continued operation of fossil fuel plants going forward (at least until 2050). It does not expand much on his former boss’ policies (which, to reiterate, have been sharply by environmental activists). Biden has received criticism from Representative Alexandria Ocasio-Cortez, who championed the progressive Green New Deal, which lays out a plan to enact legislation to stop the burning of fossil fuels by 2030. Supporters of the Green New Deal would argue that 2050 is too long to wait to stop being reliant on fossil fuels and will cause irreversible damage to global ecosystems. An argument could be made that attacking the coal industry would hurt Biden’s stock among some voters. Were we really expecting Biden to stand a chance in West Virginia anyways? No democrat has won the state since Bill Clinton, and the latest Clinton to run lost by over 40 percentage points in 2016, not winning a single county in the process. Pennsylvania may also be an issue in this respect but Biden’s Scranton roots give him an extra competitive advantage in the state, which may cancel out any negative sentiment from workers in the fossil fuel industry.

A bit of digging into the Biden team’s policies on climate change reveals some progressive elements. In what he dubs his “Clean Energy Revolution,” Biden promises to get legislation passed that will reduce U.S. carbon emissions to a net of zero by 2050 and be reliant on a 100% clean energy economy. This legislation would be a massive step in the right direction in terms of combating climate change, especially compared to Trump’s affection for the fossil fuel industry. However, rhetoric about this plan has been mostly absent from Biden’s debate performances, and tackling climate change doesn’t resonate as an essential issue that Biden is pushing as part of his message. If Joe Biden wants to have a chance to beat an incumbent Trump, actively promoting the ideals of this “New Energy Revolution” as a signature issue to help rally support among the progressive wing and influence purple voters concerned about the long term effects of the continuation of Trump’s dangerous climate policies may be a smart place to start.