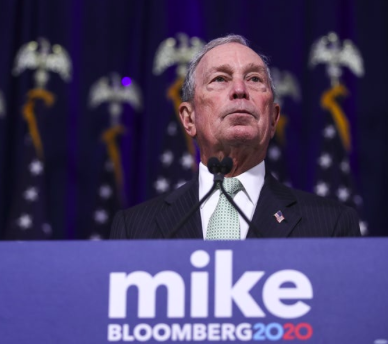 Unless you’ve been living under a rock for the past 3 months, it’s likely that you’ve seen a campaign advertisement from Michael Bloomberg. Whether it’s through television commercials or Youtube advertising, Bloomberg has captured the attention of the American public. While this is typical of any presidential campaign, this campaign, in particular, illustrates the deep-seated problems with money, mass media, and, American politics.

Bloomberg’s exact popularity varies depending on the poll, but it’s clear that he has become a serious contender for the Democratic nominee. In extreme cases, such as in recent polls from NPR and Siena College, Bloomberg is ranked as the second most popular democratic candidate. How did this happen? How did this obscure figure in politics become a frontrunner? Well, the answer is simple: money. Bloomberg’s biggest asset isn’t his charisma or his policy initiatives, but rather, his vast wealth. The success of his campaign is a symptom of the problem of capital in American elections.

While most of the Democratic front-runners primarily finance their campaigns with individual donations, Michael Bloomberg is almost entirely self-financed. As of February 2020, he has contributed nearly $470 million out of pocket to his presidential campaign. Throughout 2019 and early 2020, the Bloomberg campaign spent an incredible amount, the majority, around $340 million, on advertising. Bloomberg is not unique in his use of campaign commercials and social media, but he is definitely the most prolific. His rise in popularity in states like California, Texas, and North Carolina, where he has concentrated his commercials, can be almost entirely attributed to his ability to disseminate advertisements. In those states, support for the Bloomberg candidacy has steadily increased. Bloomberg is a fairly generic, center-left candidate. His policy positions are similar to many of the other candidates: he supports a ban on assault weapons, wants to fight climate change through regulation, and supports moderate health-care reform (he opposes Medicare-for-all). The only thing that sets him apart is his ability to pay for the presence in the mass media to influence the public.

The success of the Bloomberg campaign illustrates an issue inherent to a political system influenced by mass media- ideas that get the most attention aren’t necessarily the ones with the most merit; they’re often the ones that are the most repeated. While this isn’t exclusively true, often times, the support a candidate garners is proportional to the amount of media coverage they receive. We assume in our liberal democracy that voters will be able to rationally choose the best candidate; however, the way voters choose candidates is notoriously irrational. Voters are readily captivated by flashy advertising and catchy slogans, so a candidate like Michael Bloomberg who can capture our attention by buying airtime, can easily garner support. Additionally, his massive wealth allows his campaign to repeat the same messages over and over, swaying voters.

A candidate’s ability to influence the public through media is essential to their success as a politician. This has manifested in individuals spending their own money to broadcast their message. But, access to mass media is, by nature, unequal because it is unattainable to the poor. Put simply, the more wealth an individual has, the more they can express themselves. This means that the issues important to the lower class are often underrepresented. Income inequality is inextricably tied to problems in political representation. The Bloomberg campaign’s success is proof that the wealthy are more able to exercise their right to expression than the poor. The United States can only achieve equality of expression if it combats its systemic income inequality.