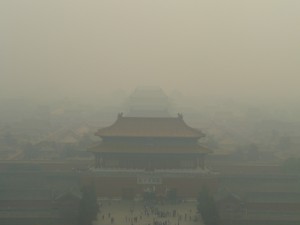 How Applicable is the Kuznets Curve in Chinese Environmental Protection?

Many have argued against the accuracy of the Kuznets curve, stating that the curve only focuses on certain aspects of environmental degradation: for example, suspended particles and SO2 and other factors of production.  Thus, it gives an inaccurate picture.  If, theoretically, a developing country has an increase in consumer-based pollution that is itself more substantial than the decrease in producer based pollution, the Kuznets curve is beyond incorrect.  In such a case, GDP per capita would increase along with pollution. Policies taken towards decreasing producer-based pollutants will be effective in reducing the overall pollution total, but may not be able to overcome the difficulties caused by 1.3 billion people consuming at a high rate.

Upon first glance, it may seem that the Kuznets curve is applicable in China; investment in ecological protection has rapidly increased.  In 2010, China’s GDP per capita reached $7,600 USD, and Chinese policy makers continued the shift towards a cleaner environment.  From 1997 to 2005, environmental protection industries almost doubled, going from 9,090 to 18,144.  As recently as 2009, the State Environmental Protection Administration (SEPA) predicted a growth rate of 15% for China’s environmental protection industry.  This improvement in the environmental industry could indicate an adherence to the theory of the Kuznets curve.  It has culminated in the evolution of an emissions cap-and-trade system, which suggests that there will be more controls placed upon pollution from manufacturing.  As the Kuznets curve theorizes, it is an indication of increased interest in the living standards within the country.  Thus it appears that the rising GDP per capita ushers in an era filled with more emphasis on ecological defense, by cutting off pollutants at the source: factories.

Still, this cap-and-trade system only places limits upon pollution produced by manufacturing.  It fails to take into account the sub-set of pollution created through consumption.  The Earthwatch Institute estimates that if China’s population of 1.3 billion consumed like Americans, “global production of steel, paper and cars would have to double, oil output would need to rise by 20 million barrels per day and miners would have to dig an extra 5 billion tons of coal.”  Though China has not yet progressed to this point, in the forty years between 1961 and 2001, according to the World Wildlife Fund, its environmental footprint doubled.  This suggests that, should China continue an increase in consumption, environmental degradation would not only continue, but also begin to intensify.

A prime example of the prevalence of consumption-based pollution in China is CO2 created by cars driven in the capital city of Beijing.  Beijing, filled with over three million cars, adopted stringent measures on car usage the year preceding the 2008 Olympic games.  A Peking University atmospheric chemist named Tong Zhu noted that, in order to assess the productivity of traffic-control measures, researchers limited the number of vehicles on the road for four days.  After measuring pollutants via satellite, cutting half of the vehicles on the road (approximately 1.3 million cars) resulted in daily reductions of CO2 emissions by 22%, according to Science News.  This shows that the Olympic experiments resulted in instantaneous changes in air quality.  Because this experiment took place before the games, the change in atmosphere cannot be attributed to alterations in factory-based pollutants.  The changes during the Olympics resulted in many benefits to society; for example, the number of asthma outpatients in Beijing was reduced on average by 41.6 percent, according to the South China Morning Post.

In spite of the changes and evident benefits of altering the number of CO2 emissions from cars, permanent alterations in driving habits have not arisen.   The China Association of Automobile Manufacturers reported that in the first half of last year, “only 134,300 small-engine cars were sold…a year-on-year decrease of 28.9 percent, with a market share of less than 10 percent.”  This, along with further reports from the Association, implies that the popular desire for larger, less environmentally friendly cars remains.  Still, between 2004 and 2006, Beijing citizens showed an increasing awareness of the hazards of air pollution.  A Gallup Institute poll showed that the number of Beijing residents who viewed air pollution as a “very serious” problem climbed from 43% to 65% from 2004 to 2006.  These same residents felt that from 2004 to 2006, the air quality had continued to decrease.   Despite recognizing air pollution as a real and relevant issue, citizens have not altered their habits of consumption on an individual level.

The environmental Kuznets curve expresses that production based pollutants are the primary cause for environmental degradation in developing countries.  As D.J Stern affirms in Environ, the turning point of the proposed curve tends to indicate the clean up efforts of the government after a time of increased manufacturing. However, the Kuznets curve does not prove to be a universal truth.  In the case of China, a significant portion of pollution is indeed consumer based and thus not accounted for in the Kuznets curve.  Ultimately, it only examines a larger picture of environmental degradation without taking into account the sources of pollution.

As displayed by the increase of participation in the environmental industry, China is taking a stronger stand towards environmental policy.  However, based upon the Kuznets curve, the idea of pollution is skewed; pollution is viewed solely as a byproduct of production.  In order to begin to decrease pollution, pollution must be viewed through all of its causes.  A change in the public idea is required to change the level of pollution.  Ultimately, through public participation, a change can come.