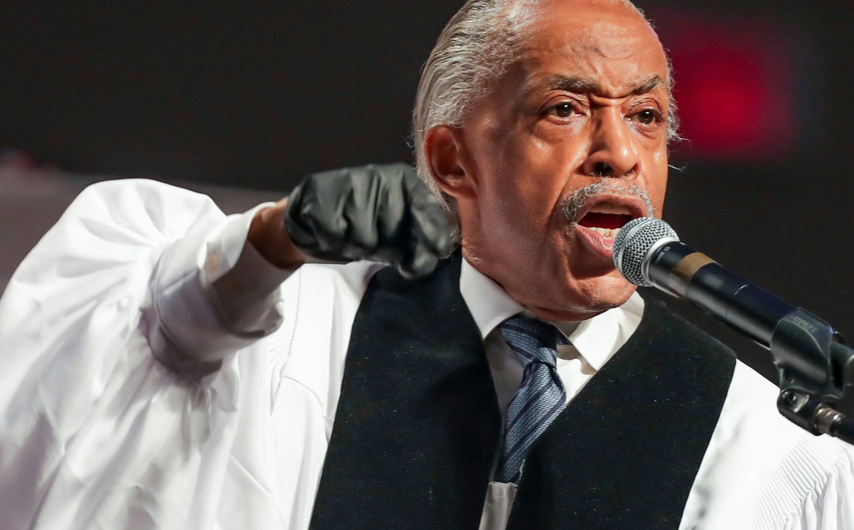 Anastasia Lacina: Thank you so much for coming to Fordham. This is really exciting! I want to start a little bit with your background. You’ve been an activist figure in politics for almost 40 years. What were some of the factors and events that originally led you to get involved in politics, and do you see any of these same factors happening now?

Rev. Sharpton: Well, I started in the church, as a boy preacher, in the Pentecostal Church, and then, later, Baptist. When I was 12, I had started going to Adam Clayton Powell’s rallies. He was a Congressman and civil rights activist. And it was a very active time, I’ll put it that way, and my mother, who raised me as a single mother, didn’t want to see me get with the “radical” forces. She wanted me to stay in the church. Her dream was for me to be a big pastor.  So she brought me to Reverend William Jones, who headed Dr. King’s organization in New York. Asked him to kind of take me under his wing, or keep me in the church. I said, “I want to be active socially,” and Dr. Jones introduced me to the national president of the economic arm. He was under Dr. King, Reverend Jesse Jackson, who was about 13 or 14 years older than me. So they kind of mentored me, and I grew up. I became at age 13 the new youth director in New York, and that year, Dr. King was killed, and I’ve been in ever since. So I literally grew up in the ministry, and in civil rights.

Anastasia: You said that that was a very active time. Do you see those kind of events happening right now?

Rev. Sharpton: Oh, yeah, I think that we’ve seen a lot of energy and activism, and some of the same, different ways of expressing it now that you saw then. You had, in those days, the anti-Vietnam War movement. You had the hippie movement. You had the Black Panthers, and black nationalist movement, and you had Dr. King’s movement. And then, today, you have everything from civil rights guys like me, to Black Lives Matter, to the anti-climate change crowd, to the anti-gun crowd, to the women’s movement, to the immigration movement.So it’s, in many ways, the same thing. I’d say the only difference, probably, is social media now. It gives people more of an organic platform. But it still falls in some of the same kind of cycles.

Anastasia: I wanted to ask about the gun control movement, because that’s obviously been in the news recently with the Stoneman Douglas shooting. And I remember, I was in high school when Sandy Hook happened. And I remember thinking to myself, and a lot of people were saying, “This is the massacre that’s going to change it. This is the one that’s going to change the conversation.” And a lot of people are saying that now. Do you think that this is going to be more of the same?

Rev. Sharpton: Well, I think that Sandy Hook did have the potential to change things. And I think this has a lot of potential now. The question is: do we study why Sandy Hook didn’t? And a lot of that is that you’ve got to – one of the things I’ve learned, growing up, is – you’ve got to go from demonstration to legislation, to make permanent change. Otherwise, what is a moment doesn’t develop into a movement. I’ve talked with some of the high school leaders in Florida, and some of those that are involved in the March 24th gathering that we’re supporting with the National Action Network, my movement. What I’ve said is that I see them gearing more towards changing legislation, impacting legislators, and I think that can make the difference. I didn’t see as much of that with Sandy Hook. I think we thought the righteousness of the cause would make way, but the reality is that everybody’s not righteous.

Anastasia: Do you think that there should be more positions in leadership in the civil rights movement made for these up-and-coming young activists?

Anastasia: Do you think that that will translate, in the 2018 and 2020 elections?

Rev. Sharpton: That’s the challenge, I think it will. That’s the challenge, because if you don’t, then you will not have really affected any changes. The effectiveness of the King movement is that they got a Civil Rights Act passed, and they were able to get a Voting Rights Act passed, and open housing. So, when your generation looks back at the ’60s, or look at what we did in New York in the ’90s, all the way until now, we were able to get convictions on racial profiling, change racial profiling, and stop “Stop and Frisk.” You judge things, in the long term, by what it achieved, and you don’t really remember all of the rallies and the gatherings unless it achieved something, and I think that that’s where people have to be focused now. If we can’t ban assault weapons, if we can’t stop these legal sales of AR-15s, then what are we 10 years from now, 20 years from now, what will people remember?

Anastasia: Absolutely. So I wanted to close out on a kind of fun note for you – have you seen Black Panther? Rev. Sharpton:            Yeah, I went to the New York premiere! I thought it was very good. I thought it was going to be good, but it was better than I thought. I’m not a real moviegoer, but some friends of mine were in it. And they got me to come to the premiere, and I was very, very impressed. I liked it.

Anastasia: What do you think it means for young Black Americans, and non-Americans?

Rev. Sharpton: I think it gives people a real cultural shift, where you can see superheroes as black. Whereas, when I grew up, and even the generation behind me, that was not something that we saw.  And I think that it takes a ceiling off of the cultural dynamics, when young whites and young blacks can grow up, and superheroes don’t have to be one color.

Anastasia: Thank you so much, this was really great!

Rev. Sharpton: No problem, no problem.