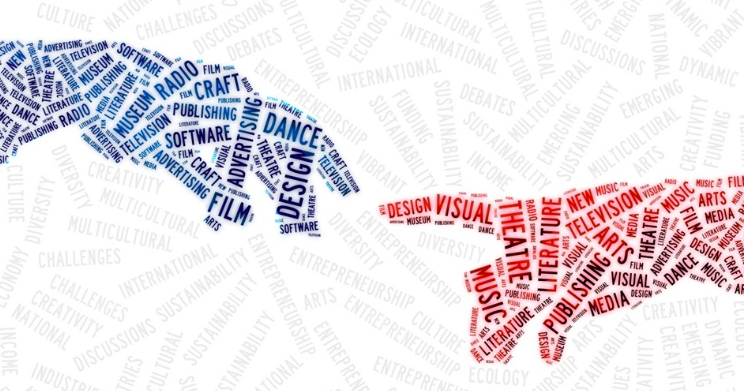 With a continuously changing economic landscape, economists and researchers are constantly looking for ways to promote sustained economic growth. One method gaining attention as a way to encourage sustained economic growth is fostering the creative economy in local communities. These communities are usually under 50,000 residents and have suffered from economic hardships. Creative industries, such as movies, music and gaming dominate the global economy, but boosting them on the local level has a high impact on community culture. The creative economy integrates economic revitalization and development with local arts and culture to cultivate a sense of placemaking and pride within a community. Also, it focuses on “imaginative qualities” over more traditional resources of land, labor and capital. Creative industries rely on the development of human capital and full participation and engagement from community members. Examples of promoting the creative economy over typical economic sectors include interactive public installations, technological innovations tailored to a community and public festivals and gatherings. Developing a local creative economy is essential to social well-being in a community and deserves to be valued as other important economic and infrastructure initiatives in our society.

Creative placemaking creates a distinct sense of place specifically through arts and creative industries in local communities. It adds to a community’s economic revitalization and livability through creative entrepreneurship and investment in local, imaginative works and projects. Additionally, it promotes cultural diversity by linking the public sphere with the freedom of the arts and creatives. When paired with economic development initiatives, creative placemaking is a more sustainable way of development when compared to industrial development initiatives. A successful example of creative placemaking is in Adelaide, Australia, where a small city described as a “wallflower” transformed itself into a vibrant, cultural hub.

Many American communities relied on industrial development in the late 19th and 20th centuries and were devastated when corporations and factories were outsourced and abandoned their communities during deindustrialization in America. However, investing in creative placemaking fosters sustainable development that doesn’t disappear easily. Creative placemaking constantly keeps a community engaged by promoting a collective identity that survives on cultural, social, and environmental qualities and pride. It directly impacts residents by providing them with life-long connections through relationships to their neighbors and place. Additionally, creative placemaking can be a solution to revitalize communities suffering from deindustrialization.

The presence of a creative economy and placemaking is something that is taken for granted in high-income areas, where affluence allows for more money and time to be spent on beautification projects and creative installments. The infrastructure and imagination needed to stimulate the creative economy are present in low-income communities, but there is a lack of monetary resources to fund creative public projects. Investing in the creative economy in low-income communities promotes income generation, job creation and an increase in export earnings by providing the community with cultural outlets, upholding community pride and increasing community participation. Additionally, the creative economy is the only economic sector that promotes and requires social inclusion and cultural identity for its participation. Cultural diversity is encouraged, and there is room for participation from any profession. This ensures that all members of the community are able to contribute and engage with the benefits of a creative economy. Investments in the arts and creatives in a community improve the quality of life and spurs economic development.

Investing in and promoting the creative economy is an innovative approach that will offer sustainable economic and cultural solutions to communities. As opposed to other industries, the creative economy provides investment in communities that reflects their values and provides solutions specifically tailored to what that community needs. In the past, the focus of news outlets and lawmakers on fixing the issues caused by deindustrialization has centered on trying to replicate the patterns of industrialization that altered the economic landscape of the 1800s. This focus idealizes the industrialization era in America and overlooks the issues it has left behind. Instead, a better approach would be to increase investment and focus on the creative economy to provide communities with new, modern solutions to community and economic issues.