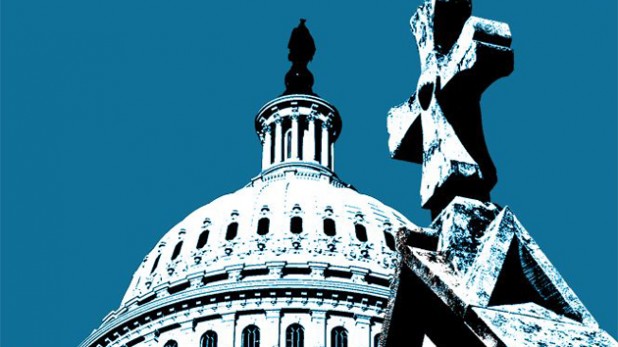 Not too long ago, the Chief Justice of the Alabama Supreme Court, Roy S. Moore, ruled that “Alabama probate judges have a ministerial duty not to issue any marriage licenses” to same-sex couples. Former Republican presidential candidate and senator Rick Santorum suggested that allowing gay marriage to become legalized would lead to the legalization of polygamy and other forms of marriage. Presidential candidate Ben Carson told the press that it would not be smart for a gay couple to go to Christian bakeries “because they might put poison in that cake.”

While these statements do not represent the sentiments of the entire American political system, discriminatory rhetoric fueled by religious ideology is a major threat to all Americans. A founding principle of the United States was that of religious freedom and the separation of church and state. Unfortunately, it seems as though we are beginning to stray away from this basic, democratic concept.

Our Founding Fathers were adamant that religion should not be used to discriminate. In the Federalist Papers, James Madison warns the people of the “the danger of a direct mixture of religion and civil government,” for he believed that “religion and government will both exist in greater purity, the less they are mixed together.”

In a letter the United Baptist Churches of Virginia, George Washington wrote, “I beg you will be persuaded that no one would be more zealous than myself to establish effectual barriers against the horrors of spiritual tyranny, and every species of religious persecution.”

The First Amendment solidifies these sentiments into law: “Congress shall make no law respecting an establishment of religion, or prohibiting the free exercise thereof.”

Despite the gravity that our Founding Fathers and the Constitution placed on the separation of church and state, and despite the threat that discriminatory rhetoric poses on the American people, policymakers do not always take a secular approach towards the support and advancement of public policy.

Some political figures fight to enact public policy on religious grounds that discriminate and threaten the equality of minority groups. Discriminatory rhetoric fueled by religion presupposes that public policy should be based on a religious context, threatening the very essence of the United States Constitution.

Herein lies one of the greatest problems that affects the social equality in the United States of America.

Perhaps most notably, marriage equality has been subject to this type of rhetorical discrimination in the U.S., as gay men and women are marginalized and discriminated against merely due to gender and sexual orientation. Evangelical Christian moralists, who create a powerful majority in the United States, defend this inherent discrimination on the basis that it is morally wrong because the Bible and Christian teachings deem this act as sinful. When it comes to marriage equality, Republican presidential candidates, excluding John Kasich perhaps, tend to outwardly condemn gay couples because they are strangled by their grassroot, Evangelical Christian base.

Although attitudes towards gay marriage have changed in the past decade, with the majority of Americans supporting marriage equality since 2009, Evangelical Christian groups remain opposed. For candidates to continue to appeal to the sentiments of only one religion, especially after the Supreme Court affirmed the right for gay men and women to get married, reflects a discriminatory rhetoric that is against the American democratic system.

This rhetoric mirrors current policy in some states and has had direct consequences on the equality of the American people.

Currently in 32 states, employees can be fired because of their sexual orientation. These 32 states are primarily states in the Midwest and run all the way down to the Southeast. Their location is very telling. When we compare the map of these states with a map of religious affiliation by state, the results show that states that have a majority of Evangelical Christians are the same as those states that do not protect workers from workplace discrimination, a correlation that suggests a direct consequence of religiously driven rhetoric

Allowing religious ideology to dictate political rhetoric is dangerous for the equality of the United States and poses a threat to minority classes. The variety of religious beliefs in our country is beautifully diverse, as it fulfils our Constitutional rights, and it creates a welcoming environment in a global context. While there will always be a divide between the majority and a minority in a democratic society, the line must be drawn when rhetoric and policy discriminate against the minority on the basis of religious thought.

Our Founding Fathers warned us from the beginning that the coalition of religion and public policy is “such a coalition, and such its corrupting influence on both parties, that the danger cannot be too carefully guarded against.” It would behoove us to head their warnings.