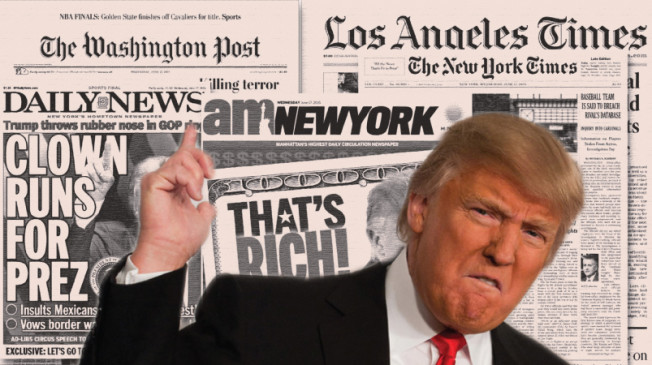 As the Trump campaign continues to face roadblocks that would normally encumber a presidential nominee’s road to the White House, the business-mogul-turned-politician has accused the media of conspiring against him to deny him the seat in the Oval Office. His crusade against the media, and the democratic institution itself, climaxed in the third debate when he told the nation that he might be unwilling to accept the terms of the election granted a Clinton victory. Since then, Trump’s attacks on the media have run unabated.

But does the Republican nominee really believe that the media is out to get him? Perhaps. More likely, however, Trump believes that there is no such thing as bad publicity.

Throughout his presidential bid, it has been evident that Trump is a master of the media; he can control an entire news cycle with one sentence, one tweet, or one missed cue. From calling Mexicans rapists, to his constant Twitter fights with anyone who dares speak poorly of him (including the Pope), to blaming a bad ear piece or failing to disavow former KKK leader David Duke, Trump basks in the limelight.

While Hillary Clinton seems to continue to avoid scrutiny by running every statement through various focus groups and polls, Trump unabashedly takes the alternative approach and tests his policy pronouncements in real time, adjusting accordingly depending on the public’s reaction. Before running for the highest office in the United States, The New York Times chronicled how Trump would hold glamorous press conferences to reveal his newest ideas. The Times reported that these press conferences were held in the gold-laden lobby of Trump Tower on 5th Avenue before the businessman even broke ground for his new projects. Often, the project would never even formalize.

When journalists asked Trump why he would throw projects that he sold to the public with glitz and glamour to the wayside, he responded, saying that he used press conferences to gauge public interest, claiming that “it’s an awfully good way of testing things … there’s no investment, as opposed to doing the deal and letting it be a failure.”

As a presidential candidate, Trump continues this policy of public opinion testing. After stating that he would temporarily ban the flow of Muslim immigrants into the country, he later rescinded his Muslim immigration ban due to the public’s poor reaction. Unlike in business, your word becomes your direct investment in politics. But Trump does not suffer the political ramifications that a conventional politician might incur; in fact, Gallup has suggested that the more press coverage that Trump receives – whether good or bad – the more emboldened Trump supporters become.

Donald Trump has truly mastered the media, and it is hard to argue that he has not used it to his advantage throughout the 2016 election cycle. For a man so enamored by the power of the press, it seems odd that he would scorn the same outlet that emblazons his name on the front of national newspapers. It is much more likely that Trump is yet again using the media to his advantage, ironically enough by implicating the industry in an alleged bias scandal.

This is not to say that there is not an unremitting barrage of articles targeting the Republican nominee, but rather to say that he encourages it. By proclaiming to his supporters that the media is out to get him, Trump is riling up his supporters just weeks before the election to ensure that they will get out the vote. There is nothing like a drawn-out conspiracy theory to motivate staunch Trump supporters before November 8.

Don’t be fooled. Trump is a champion of the media, not its victim.