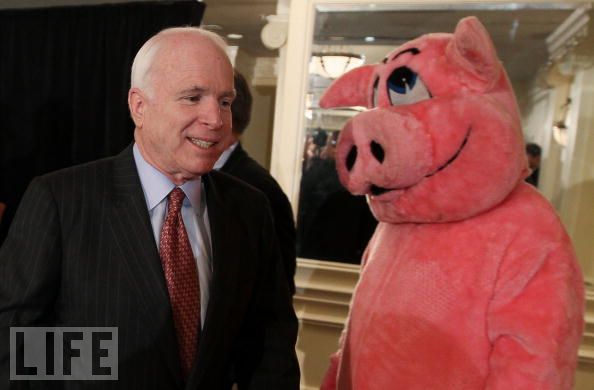 The debate over Congressional earmarks has reached a new height with the announcement by President Obama during his State of the Union Address that, “If a bill comes to my desk with earmarks inside, I will veto it.” This is generally supported by conservative members of Congress, especially those that were voted into office with the support of the Tea Party movement. In fact, Obama’s earmark ban was likely prompted by the influx of these conservative votes as a measure to placate or even diffuse their aggressive fiscal campaign promises that are aimed at closing the federal purse. While opponents to the proposal exist such as Senate Majority Leader Harry Reid, the reception has been predominately positive or neutral to the President’s measure as the earmark ban comes in a bundle of proposed cuts announced during the State of the Union including “tens of billions” in defense spending and community action programs.

This is not the first attempt at earmark reform. Prior to this commitment, conservative Democrats and Republicans have proposed similar narratives that have done little to bridge the partisan divide. First, earmarks are a key facet to the budget crisis and that eliminating them is a requisite step towards budget reform and deficit reduction. Second, earmarks are a sign of corruption and that elected officials- of both parties- use them to curry favors.

In terms of the issue of budget gaps, one has to take a good look at the effect of earmarks on the federal purse. According to the New York Times, approximately $16 billion of the $3.5 trillion annual federal budget gets redirected to local districts and states through earmarks requested by politicians. Furthermore, Senate Minority Leader Mitch McConnell (R-KY) stated before the Heritage Foundation that, “You could eliminate every congressional earmark and you would save no money,” since earmarks inherently only specify the spending of funding already allocated. For example, when the funding appropriation for the Small Business Administration includes earmarks for particular small businesses in Representatives’ districts, that money has to be allocated directly to the designated recipient from the general fund appropriated to the SBA. However, if you were to eliminate earmarks, you would not eliminate the money linked to them, as the earmark only directs money that is already allocated to the SBA. Therefore, the reality of earmarks in relation to budget concerns is that “pork-barrel spending” doesn’t increase the spending of the government and the elimination of earmarks will not decrease the size of the budget.

Instead of addressing the major questions for the future of the federal budget, the government has provided themselves a smokescreen called “Earmark Reform” behind which the tough decisions don’t have to be made. Tens of billions of dollars is a serious amount for the President to pledge to cut from defense spending, but with a budgetary deficit of $1.3 trillion, that simply is not enough. Major consumption items like the $895 billion security related discretionary budget—including the $141 billion military procurement budget, the $520 billion non-security related discretionary budget, and Medicaid, which requires $297 billion—are being largely ignored by both the administration and Congress.Real budget reform will not be successful if the elimination of earmarks is going to be its greatest victory.

On the other hand, corruption in the earmark process is a dubious argument to make. Earmarks could certainly provide an avenue for money to be funneled towards special interest groups to garner votes. The greatest weapon against corruption is transparency- to guarantee that voters and the press have guaranteed and unfettered access to data on requested amounts and intended recipients in order to expose the process to the scrutiny of public opinion. This transparency has, at least in theory, been implemented. All requests must be published on the website of the relevant Senator or Representative and the member of Congress must sign a certification positing that neither they nor their spouse has a financial stake in the specific grant. Additionally, any requested earmarks still have to be scrutinized by the relevant appropriations committee. According to Jonathan Rauch of the National Journal, a more conspicuous publishing of data and a more public application process within each constituency in order to expose the entire process could certainly improve the current regulations. Furthermore, a staff dedicated to reviewing the legitimacy of earmarks and similar to the Congressional Budget Office could provide technical expertise to the effort of battling such graft.

Such congressional transparency would certainly be positive. However, it is not only the Legislative Branch that has a hand in earmarks, since it is the Executive that administrates the spending of the national government abiding the boundaries and direction of Congress. As Scott Lilly, a former staff director for the House Appropriations Committee noted, “The idea that the only politicians in the government are in the Congress is just false.” Therefore, the proper approach to continuing reform for pork barrel spending would be to implement rules of transparency similar to those in Congress within the executive branch either by an Act of Congress or a Presidential Executive Order.

Finally, it must be noted that earmarks have the ability to make an immediate difference in the quality of life, infrastructure, and services for local constituencies. Albeit, these are small grants and certainly failed to have the same effect as a wider government program, localized projects and programs that can be costly to tight county, municipal, and town budgets become possible with the periodic influx of money from Washington. The New York Times lists several good examples from the recent history of the 19th district under the short tenure of Representative John Hall (D) who brought $51.9 million to his constituency. Top of the line cameras for the police department in Carmel were funded with a $150,000 grant. Phosphorus in Lake Oscawana was reduced from dangerous levels with a $400,000 earmark and a $250,000 grant replaced a decrepit bridge in my home town. Even Charles Duffy, the town supervisor of Lewisboro, which received $200,000 for a library, stated his rejection of a total ban on earmarks despite his recent campaigning for Hayworth. Supervisor Duffy stated that, “you want your federal representative to still be able to help your region.” On the other side of the argument, Douglas Bloomfield, Supervisor of the town of Goshen, wholeheartedly supports Hayworth and the conservative bloc’s proposal for an earmark ban; of course, he also received $400,000 to replace a water main line under John Hall, which was “great because it [was] absolutely required.”

The debate on earmarks certainly has not concluded with the President’s State of the Union. The possibility of corruption and the need for large-scale budget slimming measures remain intractable issues for Federal reform. However, earmarks need not be associated with wasteful spending. As such, Washington would be wise to establish a codified and universal set of guidelines for both Congress and the White House imposing the strict transparency involving conspicuous publishing and an exposure of the entire process of application, request, approval, and implementation.