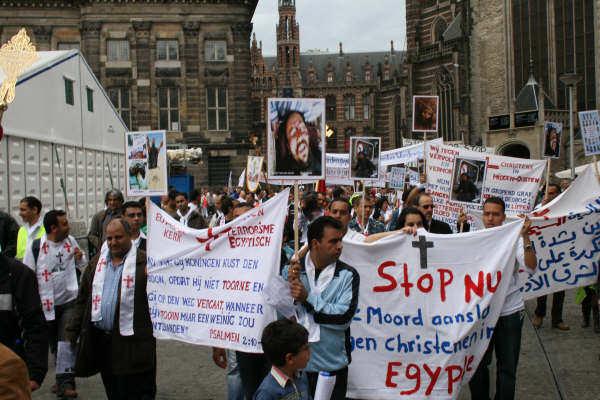 Egyptian President Hosni Mubarak blamed “foreign hands” for the attack, implicating Al-Qaeda and the rise of Islamic extremism in Egypt. On January 6, high security shielded the Coptic cathedral in Cairo for the Coptic Orthodox Christmas Eve mass said by Pope Shenouda III. Mubarak’s sons and other prominent Muslim leaders attended the mass supporting the Copts. This apparent support for Christians, however, contradicts the government’s repeated denial of religious freedom to minorities such as the Christians, Jews, and Baha’is. The Mubarak regime’s denial of civil liberties fueled the recent protesters’ persistent desire for democracy.

About a year ago, on January 7, 2010, six Christians and one off-duty Muslim police officer were shot as Christians exited a midnight Christmas mass in Naga Hammadi, Egypt. Three men were taken into custody for the shootings, yet few expected justice to be fulfilled as per previous sectarian incidents in which no one was charged or all suspects were acquitted. Cairo Copt, Amira, told BBC News: “When this hype dies down, things will probably go back to normal, until the next catastrophe.” As predicted, international attention soon faded after the Naga Hammadi shootings and Egyptian society returned to its discrimination. Shortly after this year’s bombing, Mohamed Ahmed Hussein was found guilty and sentenced to death for the Naga Hammadi shootings. According to the defense lawyer, Alaa Abu Zeid, the recent New Years bombing greatly influenced the decision. Amira and Zeid testify to Egypt’s stark reality: international attention on Egypt forces its government to adopt and, in effect, implement religious freedom until the attention declines. Hussein’s conviction presents to the world an illusion of an active and fair legal system upholding justice in the cases of sectarian violence. Yet, Egypt’s legal track record void of international pressure demonstrates a very different reality.

At the turn of the twenty-first century, twenty-one Coptic Christians were killed in a series of attacks in the village of Koshesh. The Court of Cassation acquitted ninety-four out of ninety-six suspects in 2004. Two men were convicted for planning the murders and, therefore, received lenient sentences for their seemingly tangential role. Similarly, in June 2009, a group of Christians from Cairo visited the pastor presiding over Christians in Ezbat Boshra-East. In turn, Muslim villagers attacked and looted their Christian neighbors’ homes and religious center. Rioters uprooted crops on Christian farmers’ property, damaged buildings, and injured many. Christians, fearing the attacks, remained in their homes for several days. State forces were not deployed to subdue the riot and no one was charged for the crimes. A few months later, in October 2009, Farouk Attallah was killed in Dairout because his son was in a relationship with a Muslim girl. The four Muslim defendants allegedly planned to attack Attallah’s son; yet, when they could not find him, they killed his father. Despite the numerous witnesses to the murder, the four Muslim men were acquitted in February 2010. These cases demonstrate the Mubarak regime’s quiet disregard for cases of sectarian violence that do not attract international pressure.

Alternatively, crimes against Islam are punished under Article 98(f) of Egyptian Penal Code, which prohibits blaspheming against Islam by “ridiculing or insulting heavenly religions or inciting sectarian strife.” In February 2007, Abdel Karim Suleiman was found guilty of violating Article 98(f) and sentenced to four years in prison: three years for blaspheming Islam and the final year for inciting sectarian strife as well as criticizing President Mubarak. Suleiman, a twenty-two year old blogger and student at Al-Azhar University, denounced the attacks on Alexandria’s Coptic Christians in October 2005 and the government’s acquittal of Islamic radicals involved. A year later, in 2008, police raided a Christian café in Port Said because it was open during the Muslim fasting period of Ramadan. Six Christians were arrested and sentenced to three years in prison for allegedly resisting arrest and assaulting authorities. Although Article 98(f) was not applied in this case, the police raided the café on the grounds that it disrespected the solemnity of Ramadan.

Article Two of the Egyptian Constitution reads, “Islam is the religion of the State, Arabic is its official language; and the precepts of the Islamic faith is the basic source of the legislation.” Egypt’s declared Islamic affiliation permits laws like Article 98(f) as well as zoning laws limiting the construction of non-Islamic religious centers; mandatory identity cards indicating a citizen’s religion; and Islamic education for all students in public schools regardless of their religion.

Zoning laws, in particular, present numerous obstacles that prevent any religious minority from creating a safe, communal space for worship. Zoning laws are rooted in the Humayun Code, 1856 Ottoman legislation controlling the construction and repair of churches, synagogues, and other non-Islamic religious centers. Two or more buildings of the same non-Islamic religion cannot be within a certain vicinity of on another. Rather, each building must be near at least one mosque. Neighboring Muslims and the Egyptian President must approve the construction of these non-Islamic religious centers. In December 2004, President Mubarak devolved approval for church reconstruction only to provincial governments. In late November 2010, police surrounded and attacked a Coptic Christian church in Alexandria because, according to the provincial government, it did not have proper approval. Yet, Christians in Alexandria claimed that they did receive permission. Violence between Christian rioters and police forces continued for days in late November. The zoning laws, permitted by Article Two, exemplify the systemic discrimination inherent in Egyptian law.

According to Senior Fellow Steven Cook from the Council on Foreign Relations, institutional discrimination does exist in Egypt, yet the government prefers to blame Islamic extremists and ignore the underlying systemic causes of sectarian violence and religious intolerance (personal communication, January 6, 2011). Christians constitute ten percent of the Egypt’s eighty million people, yet they are represented disproportionally in the government, military, and high levels of society. Only a handful of Christians are appointed to high-level government and military posts. There is only one elected Christian member in the 454-seat Parliament, very few legislators and judges, only one Christian governor out of twenty-eight, and zero university presidents or deans who are Christian.

The systemic denial of religious freedom represents larger human rights issues denied by the Mubarak regime and its laws. The Emergency Law enacted in 1981, after President Anwar Sadat’s assassination, restricts civil liberties especially those ensuring freedom of religion, expression, assembly, and association. President Mubarak’s 2010 extension of the Emergency Law underscores his repeated denial of civil liberties to all Egyptians. For the Christians and other religious minorities, Emergency Law legitimizes and perpetuates obvious religious discrimination. Since the historical resignation of Hosni Mubarak, we cannot help but wonder what will happen next. Will the protesters’ unity and determination inspire a more democratic and tolerant government? International pressure is on and Egypt cannot ignore their people this time. Or will they?

2,591 thoughts on “Egypt Before the Protests: Thirty Years of Religious Persecution”