Skip to content
By: Daniel Melia Posted on November 22, 2022

The dust is settling on the 2022 elections, with many races yet uncalled as mail-in, provisional, and military ballots are still counting. Nevertheless, the major takeaways are already clear: Democrats, in holding the Senate and preventing a Republican wave, have bucked the midterm trend of the incumbent president’s party taking a battering.

Many have been surprised at this outcome, including election forecasters and ‘expert’ pundits. Prognosticators from both sides of the aisle, such as the Washington Post’s right-leaning Henry Olsen to left-leaning experts at The Hill largely underestimated the Democrats.

Given the data and the anecdotal evidence, prognosticators widely predicted a ‘red wave’ of sorts, even the ostensibly nonpartisan experts, such as the Cook Political Report and FiveThirtyEight. This did not come to pass, though the forecasters were not entirely ‘wrong’, per se. Furthermore, in an interesting development, the oft-maligned polls were rather accurate in many cases in this election cycle.

This article examines the performances of some of the big name political models – FiveThirtyEight, the Cook Political Report, and Sabato’s Crystal Ball – as well as the aggregated polling data from FiveThirtyEight, by comparing them against the results (insofar as available data currently allows; many ballots are still being counted, even in called races).

How the Models Performed

Below is a chart that compares the models’ predictions for Republican gains in Governorships, House, and Senate races, versus the actual result:

Notes: Higher numbers mean more Republican net gains, whereas lower (negative) numbers mean Democratic net gains. For example, Sabato’s Crystal Ball projected that the Republicans would pick up a net gain of 24 House seats, whereas they only acquired 8 as of 11/15. For the Cook Political Report, only ranges are given; the projected outcomes given here were the simple average or middle of the range for those predictions. For FiveThirtyEight, the average result of their simulations as given on their website is used.

Generally speaking, these models clearly underestimated the Democratic Party’s election night performance. They are hardly alone in being surprised – as previously mentioned, many if not most in the media and political sphere expected a ‘red wave’ – but given that the theoretically more empirical and objective models projected Republican gains that failed to materialize, it is worth investigating why this was the case.

The logical point of analysis is the methodology of these forecasters. FiveThirtyEight publishes a long explanation of its model-building methodology, which gives a few key insights into why the model may have been slightly off the mark this election cycle. As they explain it: “The fundamentals component of our model, used in the Classic and Deluxe versions, evaluates a series of variables such as fundraising, incumbency, candidate experience, congressional voting records and even scandals to make a forecast.”

As has previously been stated, the “fundamentals” for this election were not necessarily quite as strong as indicators as they have been in elections previous. FiveThirtyEight’s Nate Silver chalked part of this variability up to candidate quality, saying “This year, Republicans nominated a series of inexperienced Senate candidates, and such candidates tend to underperform statewide benchmarks.”

Indeed, it would appeal to common sense to say that candidates such as the scandal-plagued Herschel Walker in Georgia or the embattled Mehmet Oz in Pennsylvania were perhaps not the most threatening of potential candidates, particularly when facing off against experienced politicians like the incumbent Sen. Raphael Warnock and former Mayor and Lieutenant Governor John Fetterman.

While the Cook Political Report unfortunately houses their analysis behind a paywall, Sabato’s Crystal Ball gives a similar account to FiveThirtyEight’s methodology. Said Sabato and others in their final prediction for the election: “Republicans have polling advantages on some of the key issues of the campaign [such as the economy]…. President Biden is unpopular, with his approval stuck in the low 40s. These are good conditions for the opposition party in a midterm — the kind of conditions that make this…an ordinary midterm…”

But Sabato also cautioned that these ordinary factors were to be tempered by other not-so-ordinary ones: “The confounding factors, such as Republican candidate problems in certain Senate, gubernatorial, and House races; the unpopularity of the GOP-controlled Supreme Court’s decision to overturn Roe vs. Wade; and the lingering presence of Biden’s predecessor all combine to give Democrats an opportunity to limit their losses, and perhaps even save their Senate majority.”

Sabato’s mention of the overturn of Roe is a particularly pressing one. Per Edison Research’s National Exit Poll, while nearly three in four voters expressed discontent with the state of the U.S. economy, only 31 percent of voters described inflation as the most important issue to them, with 27 percent saying abortion instead. Moreover, despite his not being on the ballot, 28 percent of voters said that their vote was meant to oppose Trump, an eyebrow-raising figure for a politician no longer in office.

Trump’s unpopularity may have extended to his endorsed candidates, further confounding the model. An analysis by the Washington Post found that “In…114 [competitive] districts, candidates bearing Trump endorsements underperformed their baseline by a whopping five points, while Republicans who were without Trump’s blessing overperformed their baseline by 2.2 points — a remarkable difference of more than seven points.”

A Condensed Look at the Polls

Below is a snippet of the polling averages for the Governor and Senate races in four battleground states – Pennsylvania, Arizona, Georgia, and Nevada: 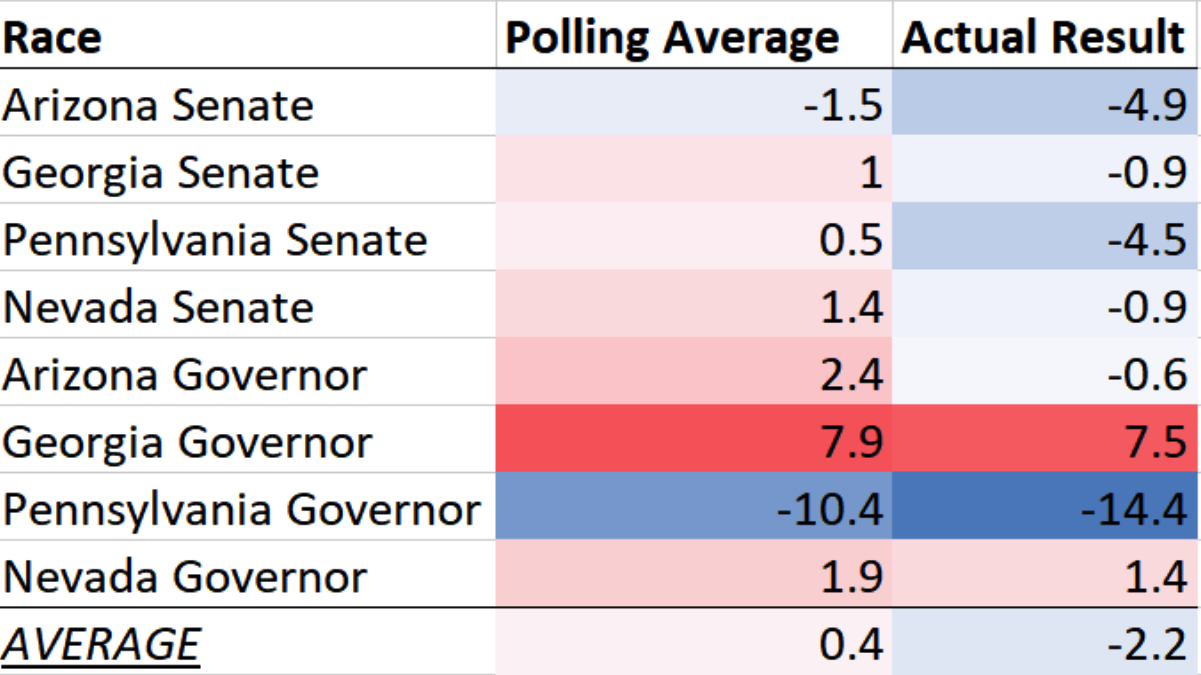 Unlike with the models and forecasts, it is difficult to assess why the polls may have been slightly off in this case, as all the necessary data are not yet available. Turnout may have been a factor, for example.

It is possible, however, that pollsters, wary of the disrepute they suffered in the wake of the 2016 election for underestimating Trump and Republicans, have adjusted their methods or data in a manner that makes for an anti-Democratic bias, as Nate Silver argued was possible in a pre-2022 election blog: “After 2016 and 2020, pollsters face more reputational risk from again missing high on Democrats than the other way around, and that could consciously or unconsciously affect decisions they make at the margin, or even which polls they release to the public.”

It should be noted that the 8 poll results shown above are not necessarily representative of the performance of the polls writ-large, which cannot be truly assessed until the results are fully tabulated across the country. Nevertheless, it appears at first glance that the polls were within their margin of error, though there may have been a slight anti-Democratic bias.

In some ways, the narrative of the 2022 election is still being written, with control of the House still up for grabs as of a full 8 days after the election (though it will likely be in Republican hands shortly). With regards to the polls and models, however, the narrative will likely depend on who you talk to. Republicans will feel gypped, similar to the way Democrats did in 2016; as Bret Stephens of the New York Times wrote, “Republicans expected a blowout win last week every bit as much as Democrats expected one for Hillary Clinton in 2016.” Democrats, on the other hand, will feel vindicated in some sense, and may feel more warmly towards the polls and models that gave them a fighting chance as a result.

From an objective standpoint, however, it appears that the polls and models performed reasonably well, though they slightly underestimated Democrats. Such is not an unreasonable result – after all, each of the prognosticators here emphasized that Democrats had a reasonable-to-good chance to keep the Senate and a nonzero chance to keep the House. Perhaps, then, the best takeaway is to believe what the forecasts say: just ask Marie Gluesenkamp Perez, who won Washington’s 3rd Congressional district despite FiveThirtyEight giving her only a 2% chance to do so. If there is a chance, however unlikely, it may still happen. Democrats did defy the odds, but not in an impossible manner.