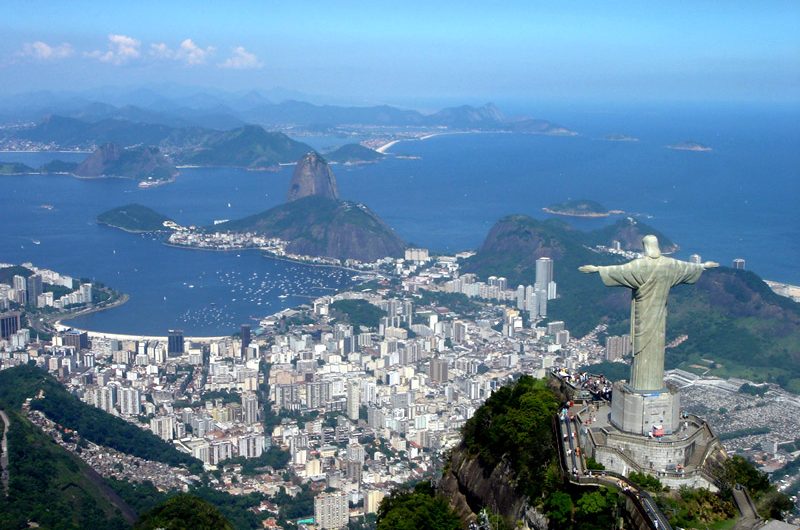 Ever since the financial crisis of 2008, Brazil has experienced net global monetary inflows.  When interest rates fell to record-low levels in the United States and other developed countries, investors with larger risk appetites began to flood into Brazil in search of higher returns.  As an emerging economy with open capital accounts and high bond yields, Brazil remains an attractive place for foreign capital. Between 2009 and 2010, the stock of foreign direct investment in Brazil increased by 9.1%.  In January 2011, Brazil’s Central Bank targeted its federal funds rate at 11.25% versus 0-.25% in the United States, which incentivized many investors to allocate more funds to Brazil. Generally, foreign investment is economically beneficial for countries because it helps stimulate growth by providing funds for capital improvement projects and other investments.  For developing countries such as Brazil however, rapid and volatile money inflows can also cause problems in the short term, namely currency appreciation and inflation.  If actions are not taken to control the amount and velocity of foreign investment entering a country, these short-term problems can worsen and impede long-term growth and development.  Also, foreign monies do not necessarily correlate with growth because of inefficiencies created by political corruption, burdensome tax codes, and inconsistent fiscal and monetary policies.  Brazil is plagued with such problems, but newly elected president Dilma Rousseff has pledged to help alleviate these issues.

One effect of foreign investment is that it often causes a country’s currency to strengthen with respect to other currencies.  A way of thinking about this economic effect is to consider supply-demand relationships for currency on the market for foreign exchange (forex).  For example, as U.S. investors demand more Brazilian reais to invest in Brazil, they supply dollars to the forex in order to purchase reais.  As the supply of dollars increases and the demand for dollars on the forex remains constant, the price of the dollar falls.  Conversely, as the demand for Brazilian reais increases but the supply remains constant, the price of the real will increase with respect to the dollar.  Therefore, the real strengthens against the dollar and the exchange rate between the real and the dollar will decrease. Since 2006, the Brazilian real has steadily strengthened against the dollar from a low of 2.176 reais/US dollar to a current exchange rate of 1.68 reais/US dollar.

These incoming capital flows can be problematic for three reasons.  First, since they help cause the currency to appreciate, they can have an adverse effect on exports.  This is due to the fact that Brazil’s products and services become relatively more expensive for foreign countries as Brazil’s currency strengthens in value.  Brazil has a large supply of natural resources and its exports in 2010 made up about 14% of total GDP, so any decrease in exports would negatively affect GDP growth.  Secondly, excessive foreign investment can help overheat the economy and increase inflationary pressures. During December, the inflation rate in Brazil rose to 5.9%, due in large part to rising food and major commodity prices.  This was well above the Central Bank target rate of 4.5%.  Also, the Bovespa, the main stock exchange in Brazil, has increased 121% since 2008 and has already surpassed its historical high.  This could indicate investor exuberance in Brazilian stocks, and may be a predictor of future inflation and asset bubbles. If inflation and/or inflation expectations continue to rise, foreign investors could easily become nervous and quickly remove funds from Brazil.  Furthermore, excessive inflation could act as a major obstacle to domestic demand and GDP growth. Thirdly, emerging countries often struggle as a result of large capital inflows because they find it difficult to adapt to rapid growth in credit, asset prices, and demand.  In order to allocate foreign capital most efficiently and effectively, Brazil and other countries need to rapidly improve infrastructure, increase business innovation, increase political transparency, improve human capital, and decrease income inequality.  The rate at which these other changes happen often lags far behind the increase in investable capital from foreign sources.

In order to avoid these potential pitfalls, the Brazilian government and Central Bank need to closely monitor changing conditions and work in conjunction to manage this rapid growth with a view towards sustainable long-term growth and prosperity. Unfortunately, there is no easy way to concurrently fight rising inflation expectations and currency appreciation. Monetary policy options are limited and have downsides.  For example, to prevent excessive inflation, the Central Bank has been raising interest rates.  But this increases the interest rate differential between Brazil and foreign countries, making Brazil a more attractive investment from the point of view of foreign investors and causes the real to appreciate.  If the Central Bank kept rates low, though, inflation could quickly get out of hand, causing foreign investment and domestic demand to diminish dramatically.  Fiscally, Brazil needs to encourage a positive business environment by reducing the deficit through budget cuts, but it must also spend to improve its infrastructure. Dilma Rousseff, Brazil’s new President, who took office in January 2011 and succeeds the popular Luiz Inacio Lula da Silva, has expressed a commitment to do both of these things.

So far, the Central Bank has worked actively to fight the aforementioned economic threats.  During the past months, Brazil’s Central Bank has intervened directly in the market at snap auctions, buying U.S. dollars from investors to reduce rising currency pressures.  In addition, it has announced forward dollar auctions, which is in essence another way to buy dollars from the market to relieve the market of the oversupply of dollars.  Furthermore, it has instituted capital controls, such as an increase in taxes on short-term investment inflows.

If effectively managed, this period of dramatic growth could be a once-in-lifetime opportunity for Brazil to begin to transform itself from an emerging market to a world superpower.  If mismanaged, the country could struggle for years to come with problems that originated during this time.  Brazil’s GDP is expected to grow by 4.5% this year.  As the host of the 2014 World Cup and the 2016 Summer Olympics, Brazil will be in the squarely in the public eye in the coming years.  Hopefully, the economic story it will be able to share with the world is not one of corruption and stagnation, but one of rapid growth and sustainable development.

37 thoughts on “For Brazil, Foreign Investment May Be Too Much of a Good Thing”