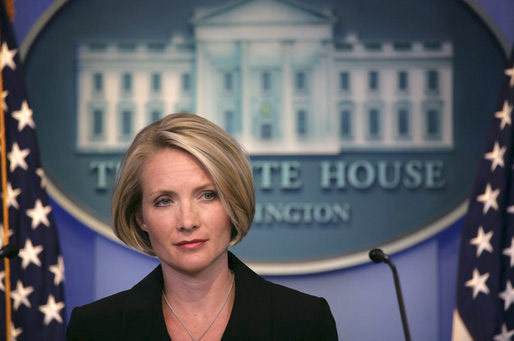 The Fordham College Republicans welcomed their second guest speaker of the Fall 2014 semester this past Thursday — former White House Press Secretary Dana Perino. Ms. Perino, before presenting her lecture in Keating 3rd Auditorium, sat down with the FPR’s Benjamin Shull for an exclusive interview.

Poll after poll this election year shows Republicans to be a slight favorite to win the Senate on November 4th. While it may be unrealistic to expect that the GOP can enact a significant amount of its agenda with President Obama still in the White House, do you see any potential for incremental progress, such as a medical device tax repeal or a corporate tax reduction, should Republicans control both chambers of Congress come January?

Here’s my opinion. I think that, no matter what anyone tells you, the President of the United States, whoever it is, sets the agenda for what’s going to get done in Washington. The executive branch is really so powerful. President Obama has a choice to make right now which is, even if the Democrats were to hold on to the Senate, which looks like a slim possibility now, there’s going to be more Republicans. If the Republicans take over, I think that the President needs to approach this as a great opportunity to do some important things. There are a couple of things that could get done, and I’ll give you an historic example. In 1995-96, after the Republicans took over the House and Senate in that whole wave election, the Contract with America — that was when President Clinton, who had said he would be willing to do welfare reform but hadn’t done it yet with a Democratic Congress, and the Republicans came in and put a deal on the table, that’s when the compromise happened and the President signed the legislation. President Bill Clinton has been talking about that ever since as one of his signature achievements. Sometimes, the best legislation is actually accomplished in a divided government situation. President Obama could be looking at that scenario and I think that there are three main things that will happen. I think that the Congress will send the President a corporate tax reform bill and that the President will sign it because right now, the corporate tax rate is at 35-39%, the President is at 29% and the Republicans say that they want 25%. Now, the details are important to work out, but reasonable people should be able to get from 25% to 29% and come up with 27.5% and find a compromise. So that’s one area, and that would be something that the President could point to for the rest of his life and say I did something really important for the economy and I brought jobs back to America. Second thing is that I think that the Republicans will send President Obama a keystone pipeline bill and I believe that he will sign it because he’s not running for office again and I believe that Hillary Clinton, if she is the nominee, would prefer for the President of the United States to sign it so that that does not become a campaign issue in 2016. And then the third thing is that I do think that there will be some Obamacare-related changes. They are not going to be the huge changes that some people really want. Obama is never going to repeal Obamacare, but there are some things that could improve. For example, the medical device tax — if Harry Reid, the Senate Majority Leader was not acting as the President’s veto pen, they could have passed that with ninety votes last week. So there are some things that will make sense. However, if you repeal the medical device tax, you have to make up for that money somewhere else, so the President is going to be pushing on a revenue increase somewhere, and Republicans will be resistant to that and they’ll be thinking about their own future presidential aspirations and then it might get really difficult to get something even as easy as a medical device tax repeal done.

A prominent theme this election cycle finds Democratic candidates, especially those defending seats in red states, running away from Obamacare and even rejecting appearances from the President on the campaign trail. Even if the Democrats happen to hold onto the Senate, has President Obama lost command and sway with his own party, with many of his fellow Democrats opposing him on issues such as the Keystone XL Pipeline and NSA surveillance?

In some ways the President has lost sway in his own party, and if you look at somebody like Mark Begich, the Democratic incumbent Senator from Alaska — this week he said that the President is ‘irrelevant’. Now, some of that is campaign swagger, a little bit of tough talk. What the Republicans have been saying to voters is that yes, these Democrats say they’re not going to vote with Obama, but they voted with Obama 99% of the time before the election so what makes you think they’re not going to vote with him after the election? So that’s true and I don’t think that any President would see their party completely eat themselves up and I hope, for all of our sakes, that the President does some regrouping in the next couple of months because two years from now is a long time. To think that ISIS was able to expand into that territory within about seven months. Two years is a long time to have someone not awake at the switch.

Turning over to the House quickly — the Republican leadership was uprooted this Summer when Dave Brat defeated House Majority Leader Eric Cantor in Virginia’s 7th Congressional District primary. Cantor, who appeared at least somewhat open to immigration reform measures, was attacked by many in his party’s Right for supporting so-called “amnesty” and many have speculated that his position on immigration is what cost him his seat. With Republicans having very low support within the Hispanic community, a voting bloc that becomes more and more prominent every election year, does such bitter opposition to immigration reform minded Republicans imperil future GOP success?

I think that any position can be explained to constituents with a lot of effort. I don’t believe that the voters who sided against Cantor did so just based solely on immigration although I think that was an important issue for a lot of people. By and large, Eric Cantor, partly because his role was to be the national person doing all the fundraising across the country — he didn’t get home very often. People in their districts want to know that they still matter and I think that if he had gone back and explained to them his position on the DREAM Act, I think he could’ve won them over and at least have them believe that he’s still the best Congressman for them. I’ll give you one example. I was just reading President George W. Bush’s book about his Dad that’s coming out in a couple of weeks and when George H.W. Bush was in Congress, he was one of nine elected leaders of Texas to vote for the Civil Rights Act and his constituents were furious. And he went home, and he faced a really angry town hall meeting and at the end of it, after he had explained with conviction why he had voted the way he did, the crowd gave him a standing ovation. So it can be done, and it just takes a lot of effort because you have to win people’s hearts and minds through persuasion and being persuasively correct is the way to do that.

The new post-Cantor leadership trio in the House, with John Boehner still serving as Speaker of the House along with new Majority Leader Kevin McCarthy and Whip Steve Scalise, oversaw passage of a spending bill that reauthorized the Export-Import bank, a point of contention between the pro-business and tea party wings of the GOP. Do you see animosity between the so-called establishment and tea party continuing into the 114th Congress?

I do see it continuing but I don’t see that as a bad thing. I have loved watching what I call the ‘nerd fight’ between the pro Ex-Im Bank people and the anti Ex-Im Bank people. They make really good points on both sides and I’m kind of torn on the issue. Let me just tell you something — nobody, outside of like 100,000 people would be able to tell you what the Export-Import Bank is and maybe I’m being generous. Maybe it’s only 10,000 people that would know about it. That’s not the big issue, but it is a symptom of the bigger disease which is big government and what can the Republicans do to talk about running on the idea that government should do less. How many people run on a campaign that says ‘we should do less!’ I think the debate between the two of them actually helped clear the air, so I’m encouraged by it.