The Debate Over Private Drone Use 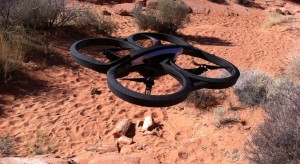 From apps such as Yelp that help us find the best Thai restaurants within a five-block radius to sites like Google Maps that aid us in determining the fastest route to a job interview, we use satellite images daily. The convenience and efficiency of these apps and programs outweigh privacy concerns, but what about the idea of governmental and personal surveillance through the use of unregulated video shadowing?
Imagine the prospect of countless drones flying through the open sky, able to take HD video, even capable of tracking people based on the colors they wear. This seemingly futuristic dystopian vision is sparking debate across the American public: should private drone use be legal, and if so, what regulations should be present?

Personal drones – or unmanned aerial vehicles (AAVs) – are available anywhere from Amazon.com to local malls. Anyone can purchase an AAV, and the more basic models average around $300. The Parrot AR.Drone 2.0, available on Amazon, can be controlled by iPhone, iPad, and Android devices. A personal drone can be an innocently fun Christmas gift for kids, but can also be a potentially dangerous tool for stalkers and criminals. Videos collected by AAVs can be easily uploaded onto smartphones and computers, but there is no legal regulation regarding the content of the videos. Operators of personal drones may unintentionally record criminal behavior or infringe on strangers’ privacy. Of course, this raises some questions: what are the guidelines for personal privacy and is accidental invasion of privacy an enforceable offense?

Overhead territory is considered public space, so some make the argument that the physical presence of personal drones in the air is an activity that is harmless and provides no cause for legal redress. The Federal Aviation Administration (FAA) has enforced some boundaries for private drones. AAVs, which follow the same jurisdiction as model planes, must not fly above 400 feet, must be visible from the ground, and must steer clear of airports. Even with these restrictions, the FAA does not address the privacy concerns of the public sector. For the most part, the regulations set forth by the FAA are set to ensure air safety for other aircraft, but the FAA does forbid commercial use of private drones as it is illegal for businesses to use video and photo captured by AAVs for their own benefit. However, there is no legal penalty for personal drone hobbyist use and enforcement in this sector is not within the power of the FAA.

Discussions over law enforcement of private drone use currently reside at the state level and many states are taking measures to create private drone laws. In Texas, Republican Representative Lance Gooden is pushing legislation that would effectively prohibit personal, state, and federal drone use. The bill would include a couple of exceptions, including the allowance of drones within a twenty-five mile radius of the Rio Grande for illegal immigrant and drug intervention purposes. Gooden’s hope is that this legislation will avert drones from the apprehension of “indiscriminate surveillance.” Gooden’s proposed bill exposes the problematic contentiousness surrounding drone law enforcement. Debates over federal versus state legislation, the depth of privacy concerns, the interest of personal and public safety, and the inhibition of the drone market all intersect to present greatly divided and convoluted motivations for law enforcement.

The police sector presents a sharply split dispute regarding the pros and cons of drone use. Police drone use may be useful in searching for missing persons, surveying hostage situations, and tracking suspected criminals. While the use of drones by the police has its benefits, it also raises privacy concerns, especially with respect to the Fourth Amendment. In Charlottesville, Virginia, for example, any evidence obtained by drones cannot be used in court. The city permits the police use of drones only for efforts such as search and rescue. Charlottesville presents an instance of municipal drone enforcement and the results of its legislation may provide precedence for statewide or federal law regarding drones. In Seattle, by comparison, Mayor Michael McGinn banned the use of private drones by the Seattle Police Department after public protest.

The cases in Charlottesville and Seattle illustrate public concern over unwarranted surveillance, and uncover controversies over the legislative level – municipal, state, or federal – of drone law enforcement. The debates expose not only the controversial purposes and motivations for AAV use, but also consider restrictions over who is able to use drones. Many Americans have raised concerns about neighbors or strangers using drones to spy or peep and about public agencies utilizing drones to conduct surveillance. The Association for Unmanned Vehicle Systems International (AUVSI) contests these concerns in respect to the Virginia Legislation. The AUVSI argues that public agency drone prohibition would obstruct public safety, and impede Virginia’s potential economic growth as more jobs become available within the drone and public surveillance markets.

Debate over public and private drone use presents an especially tricky predicament over the relationship between technology and legal regulation. The drone debate will continue to raise concerns in legislation, especially in subtle discrepancies between personal and public use. This controversy exposes pressing issues for present and future legal debate: can the law keep up with technology, and how does technology compromise private and public interests?

For now, it is best to choose not to embrace the paranoia – I am not worried about constantly looking overhead to see if I am being followed by a flying camera. The real concern lies in the future legislative compromise between private and public drone interests, and what this decision will illustrate about potentially increased government regulation.

Tucker Westbrook is a FCRH 2015 Political Science major and he may be contacted at twestbrook@fordham.edu.