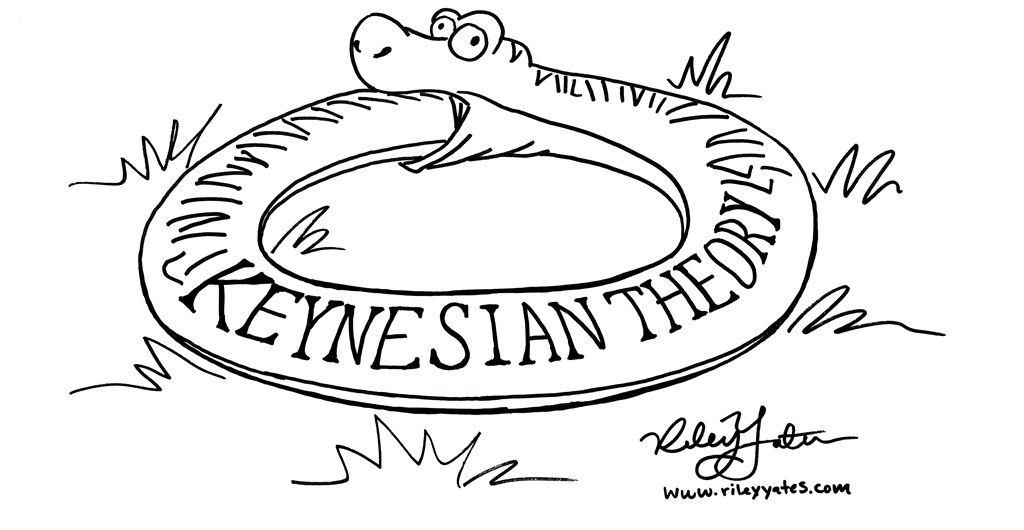 Today’s global economic situation, which is underscored by political myopia and reactionary policies, is the product of Keynesian economic theory. John Maynard Keynes’ influential economic work The General Theory of Employment, Interest and Money, has inspired much of the world’s modern economic theory. In fact, 35 years after publishing The General Theory, President Nixon is credited with saying “We are all Keynesians now.” It is a sentiment which has hardly been challenged in the White House since.

At the cornerstone of Keynes’ philosophy is the manipulation of aggregate demand. His idea was that government should have a significant role in the economy by stimulating the economy in times of recession with public spending and tax breaks. This debt would then be repaid by raising taxes and cutting government spending when the economy is performing well. Since the naissance of Keynesian thought in the global economic system, politicians from both sides of the aisle have relied heavily on its economically manipulative policies, and thus, this school of economic policy has become systematic to the modern economy. All of the other shortcomings notwithstanding, Keynesian centralized planning poses great logistical difficulty in a democratic system.

Generally, there are two fail-proof actions the public loves from their elected officials: lower taxes and more benefits (via government spending). Conversely, there are two actions voters hate from their elected officials : higher taxes and less benefits. Intuitively, this makes it very easy for elected officials to pass legislation that Keynes would prescribe for an economy in recession, but very difficult (and potentially career jeopardizing) to reverse and compensate for the economic stimulus. With the public’s strong appetite for low taxes and high government spending, politicians have no choice but to cater to their voters’ desires.

When it comes to calculating the federal budget, the math is simple enough for most to figure out. Intuition would lead one to believe that spending without generating income to fund the spending is unsustainable—and many people have concerns about the increase in government debt. However, they are not quite worried enough: only around only 3% of Americans cite this as their most important issue. Government bodies also have a propensity for dismissing the debt problem in exchange for short term prosperity.

For evidence of government’s tendency towards willful negligence on the subject of thenational debt, one must look no further than The Maastricht Treaty. The Maastricht Treaty established the Euro Convergence Criteria for countries joining the European common currency (eventually called the “Euro”). Two of the four fiscal stipulations of the treaty concerned government debt: a nation must have an annual deficit spending of less than 3 percent of GDP, and overall government debt of less than 60 percent of GDP. The inclusion of both of these imperatives would insinuate that a healthy union would require fiscal responsibility in terms of government debt management. However, much like voters who favor higher spending and lower taxes, the union of governments forming the Maastricht Treaty disregarded the severity of debt.

When the time came to review the financial health of the applicant nations, 7 of 12 failed to meet the requisite criterion of debt to GDP ratio, thus a clause was added to lower the standard. However, this still left out Germany, Austria, and Greece, who were eventually allowed in regardless. Moreover, despite failing to meet the preliminary standards, it has been discovered that France, Italy, and Germany all engaged in manipulation of their figures to even be in the ball park of 60% debt to GDP. Thus, there seems to be a clear deferral of debt on the list of priorities from citizens all the way up to their elected government, and this can be very dangerous.

Greece, the home of democracy and a Keynesian government, has developed a debt problem that has been widely reported. Before their government’s default in late June of 2015, the Greek’s received 240 billion euros (about $318 billion) in the form of two different bailouts, as well as having a significant portion of their bonds backed by the ECB to boost investor confidence. The default has raised concerns about the stability of the euro as a currency as well as the stability of the European Union as an entity. Belgium, Cyprus, Portugal, and Italy all had debts of over 100% of GDP as of 2015 and other countries such as Ireland, Spain, and France have also been included in the potential default discussion.

In total, there are nine countries that currently have a debt to GDP ratio of greater than 100 percent—the United States is one of these nine countries at 104 percent and growing at an alarming rate. In 2015, Sen. Rand Paul, R-Ky. stated that the U.S. borrows money at a rate of $1 mil per minute. This statement was checked by Politifact and received a rating of “Mostly True” as this estimate was only off by a slight margin: the U.S. borrows at a rate of about $925,000 per minute. The current level of U.S. government debt is rapidly approaching $20 trillion, which comes out to about $167,000 per tax payer.

Moreover, the government is exempt from reporting debt in the same manner of private companies, as they are allowed to exclude “explicit and implicit” future obligations such as employee pensions and retirement benefits. When these government liabilities are factored in, the government has about $84.3 trillion in debts, liabilities, and unfunded obligations. This equates to 451% of GDP and $670,058 for every household in the U.S. Obviously, it is not yet an Armageddon for the U.S. government like it is for Greece, but why?

The majority ($13 trillion) of the debt is held by United States citizens and entities, followed by China at $1.3 trillion, and Japan at $1.1 trillion. The owners of the U.S. debts, and the market as a whole, do not yet doubt the country’s ability to make good on their payments. This is for good reason as the United States is the wealthiest country in the world with $85 trillion in national wealth (the second wealthiest is Japan at $24 trillion) and thus has a tremendous well to draw from in order to pay off its debt. In comparison, Greece is number 29 on the list with $947 billion in national wealth.

In 2013, the U.S. government shut down over spending limits and the debt ceiling as Republicans attempted to limit both spending and debt, but ultimately failed against a Democratic Senate and President. Balancing the budget and avoiding seemingly annual debt ceiling rises seems to be a monumental feat. However, in order to decrease debt, the U.S. must not only balance the budget, but run a surplus—something which has not happened in 15 years and is all together extremely rare in the modern era.

The U.S. cannot continue down the path of reckless government spending that has plagued the entire world in the post-WWII era. Governments taking on debt is simply a deferred tax at a premium. The creditors expect to be paid back eventually and, as governments are not profit generating machines, the debt becomes the taxpayers’ obligation. Simply pushing off debt makes it the responsibility of the next generation. The Keynesian policies of the baby boomers have developed a tab for the millennials.

The Keynesian mindset is inveterate and deep-rooted, thus, it is difficult to combat politically. According to a 2015 study, despite the rising debt and regular government budget deficits, Americans still want more government spending on programs and lower taxes for themselves. The preference of an economy inflated on the stilts of expansionary government policy fueled by government debt is extremely dangerous in the long-run.

One of the major combatants of Keynesian economic theory was Nobel Prize winner, Milton Friedman. Friedman once said, “There is nothing more permanent than a temporary government program.” Over time, this has proven to be a true observation. Keynes, too, has a famous quote, “In the long run we are all dead.” This is proving to be a self-fulfilling statement.