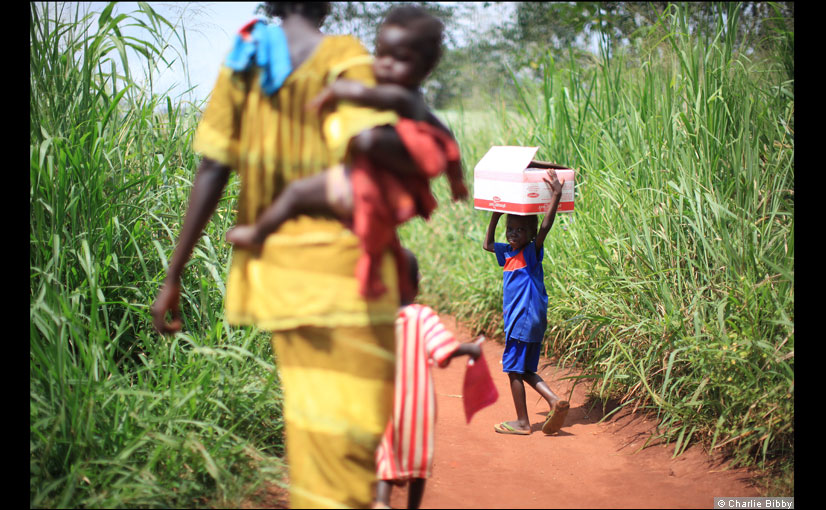 As the world becomes increasingly globalized and technology transforms reality, the novelty of new innovations sometimes eclipses the very realsuffering of a sizable portion of the Earth’s population. Although technology allows people on opposite sides of the globe to speak face to face, it has yet to fix the problem of famine and malnutrition in under- developed and developing countries. On September 24th, at an emergency meeting in Rome regarding food price inflation, the UN warned of an impending major food crisis. It continued along this line when, on October 6th, its Food and Agriculture Organiza- tion (FAO) published a report declaring that no less than 22 countries are facing enormous food-related challenges, including repeated food crises and an ex- tremely high prevalence of hunger. These crises stem from a combination of natural disasters, conflict and weak institutions, and are affecting approximately 925 million people who live, according to the FAO, in “chronic hunger.”

Confronted with such grim statistics and a discouraging lack of public interest, the situation seems
hopeless to many. However, among the dark realities there shines a small ray of hope called Plumpy’nut.
Plumpy’nut may not be the most appealing moniker, but it is an apt description of the product: a peanut-
based paste specifically formulated to rapidly increase weight gain in malnourished children. It’s officially
classified by the World Heath Organization as a Ready-to-Use-Therapeutic-Food (RUTF), and, true
to that classification, it requires no water, preparation or refrigeration and has a shelf life of 2 years.
It’s a blend of peanut paste, vegetable oil, powdered milk, powdered sugar, vitamins and minerals, all
enclosed in foil pouches containing 500 calories each. Inspired by the chocolate hazelnut spread Nutella,
and manufactured by the French company Nutriset, Plumpy’nut has the enormous and fantastic potential
to alleviate a considerable amount of the rampant hunger and malnutrition around the world.

Can the paste be used in the same manner as the large-scale introduction of antiretroviral drugs to Af-
rica in the last twenty years? Moreover, is there evidence that the paste helps prevent malnutrition, rath-
er than alleviating short-term hunger? The issue has pitted those who want to see solid, scientific evidence before embarking on a major aid program, against those—impatient with talk of cost-effectiveness and sustainability—who want to act now. The effectiveness of Plumpy’nut ultimately hinges on a distinction between treatment and prevention. Giving the paste to children who are moderately malnourished or just at risk of severe malnutrition, may help curb this usurious cycle that begins with poor-quality food and
weak immunity. Yet identifying and supporting those children on such a scale poses a mammoth logistical
challenge to aid organizations.

It was first used in Darfur in western Sudan, where it was credited with cutting malnutrition rates in half. Its success continued in Niger, where it was administered in 2005. The region into which it was introduced had been the region with the highest malnutrition rate in the country; however, largely thanks to Plumpy’nut, it currently has the lowest rate. Results have been similar in other countries, including the Democratic Republic of Congo, Malawi and Ethiopia. In addition to being effective, the product is relatively inexpensive to produce and distribute. A standard treatment (one pouch two to three times a day for a child between six and 24 months) costs
approximately 12 Euros in sub-Saharan Africa. Each pouch costs a mere $0.06.

However, there are dark undertones to this bright ray of hope. Nutriset, the original producer
of the product, claims that it needs to be patent-protected in order to safeguard its production and
protect against cheap surpluses. This claim has drawn life-saving resource. The patent debate is still raging,
primarily between Nutriset and two U.S. non-profits, the Mama Cares Foundation and Breedlove Foods.
Nutrition science is a difficult process in the developing world. The biological and genetic varia-
tions between villages and populations makes it difficult to randomize children to two regimes within a
village, in an effort to test the effects the paste within a population. Moreover, studies done in Malawi by
the WHO in 2008, between neighboring villages, appeared to have little effect on the larger prevention of
malnutrition, and is often consumed within the initial days of delivery, making it difficult for researchers
to determine the effect the paste may have if meted out in small doses throughout the day.
Nevertheless, Plumpy’nut has the potential to alleviate much of global hunger and allow mass
treatment, all at a decreased cost. However, its commodity treatment has complicated this aspiration.
It remains to be seen whether companies will cede their potential profits to the benefit of the global
community or will they merely cash in on the power of the Plumpy’nut.
-Aly Kravitz ’12

32 thoughts on “Hopes Based on a Peanut Paste”