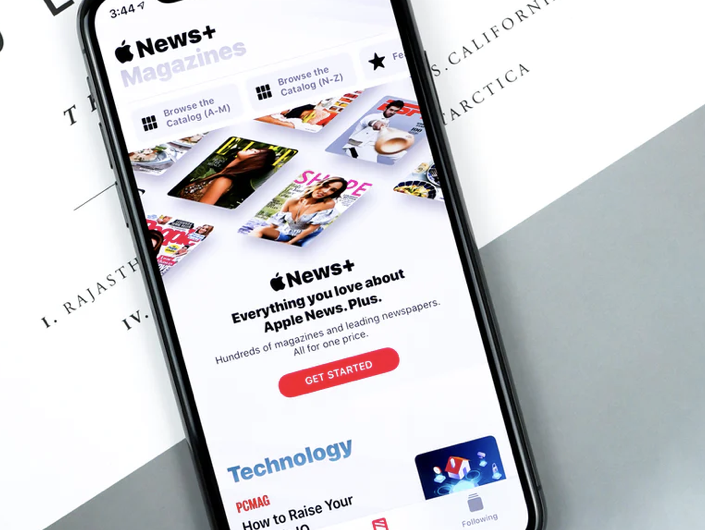 If you have an Apple product, you’re probably familiar with its free app, Apple News. Originally introduced in 2015, Apple News gained a reputation for using former journalists to choose the top articles that appear in the app, rather than just the algorithms commonly used at Facebook and Twitter. In 2019, Apple CEO Tim Cooke revealed that Apple News had reached 85 million monthly users worldwide, a 21% increase since 2016. By April 2020, that number had reached 125 million. In comparison, the Wall Street Journal has about 3 million subscribers, while the New York Times has about 8 million. Every month, five billion articles are read in Apple News, making it the most used news app in the world.

Apple News Plus, on the other hand, is a paid-subscription service that works by bundling together various subscriptions into a single monthly fee. By paying for Apple News Plus, you can get access to dozens of different newspapers and magazines, including the Wall Street Journal, the LA Times, and National Geographic, and etc. While not as popular as the free version, Plus has gained a following due to its bargain price: Cooke said there were 200,000 subscribers in the first 48 hours.

Apple News partially works by monitoring the stories you read and recommending stories based on those topics. It also allows you to personalize your media, allowing you to “follow” certain topics (such as Politics, New York City, or Science) and news sources. This means that all of your factors, such as your reading habits, choices, and the Apple News editors’ choices, determine what appears in your feed.

On the surface, Apple News appears to be a great service, providing free essential information to millions of people. Some newspapers, however, are beginning to have problems with the service. In June 2020, the New York Times made headlines for pulling out of Apple News, explaining that the app did not allow the Times the freedom to build a relationship with their readers.

So what are the problems with Apple News compared to a normal newspaper?

The first is its effect on newspaper sales. Apple News doesn’t actually write any articles itself, it just displays articles from other media sources. Newspaper circulation in the United States has been falling for years. According to the Pew Research Center, in 2018, newspaper circulation was at its lowest since 1940, with nearly a 62% drop in advertising revenue, and a 47% decrease in newsroom employment. Considering Americans believe journalism is one of the cornerstones of democracy, very few of them are willing to pay for it. Newspaper subscriptions fell to a mere 30 million in 2019.

Apple News doesn’t help the problem. Why would anyone pay for a newspaper subscription, when they think they can get everything for free (or at the bargain price of ten dollars a month, for Apple Plus) on Apple News? Furthermore, even for the newspapers with which Apple does have a monetary deal, profits are slim. Apple takes 50% of the revenue from publishers; the other half is split among media companies based on how many views any particular article receives. According to Slate, which displays its articles on Apple News as well as their own website, they earned more money for 50,000 views on slate.com than 6 million views on Apple News. Apple News is creating an unsustainable business model: they are driving out of business the very companies that they rely on for their “product.”

The second problem with Apple News is the bias that it creates. While most traditional newspapers have political leanings, they usually make an effort to showcase different points of view, usually through featuring columnists that present a counter argument. Apple News, however, tailors a user’s newsfeed to what they want to hear, meaning that people who use the app are less likely to read any sort of article written from a different point of view.

There is another implicit bias involved in Apple News as well: that which is interesting to the user. Because of how the app works, your preferences are tailored based on the types of the articles you click on the most. Even when you do get recommendations about real news, many of the articles might revolve around the exact same topic. In a regular newspaper, the editors might choose to devote one or two articles to an important issue. However, since Apple News pulls from dozens of sources, you might get a dozen different articles about the same event (one from CNN, one from the Wall Street Journal, one from NBC, etc), many of which are just repeating the exact same facts. Big stories can dominate your news feed, pushing smaller stories into the background. If you relied on Apple News for your information in December 2019, for example, you probably would’ve been inundated by a dozen articles about the upcoming impeachment. You might, however, have not been given information about a recent outbreak of a highly contagious disease in Wuhan, China.

If you read a regular newspaper cover-to-cover, you will find articles not only on things that directly affect your life, but a variety of issues and viewpoints from across the world. Newspaper editors attempt to give sufficient space to different stories instead of focusing solely on domestic issues: This is with good reason, as news items of seemingly little consequence can often explode into something much bigger. By trying to tailor its content to what you want to hear, Apple News misses the opportunity to challenge your views or expand your horizons.

Is Apple News the worst thing to ever happen to print media? No. It’s hard to argue with something that provides so much information to so many people at no cost. And yet, as the number of users increase, we must seriously consider the problems associated with overreliance on the app. While no one likes to turn down free stuff, newspapers should be something we’re willing to pay for, considering the serious consequences that could result if we don’t.