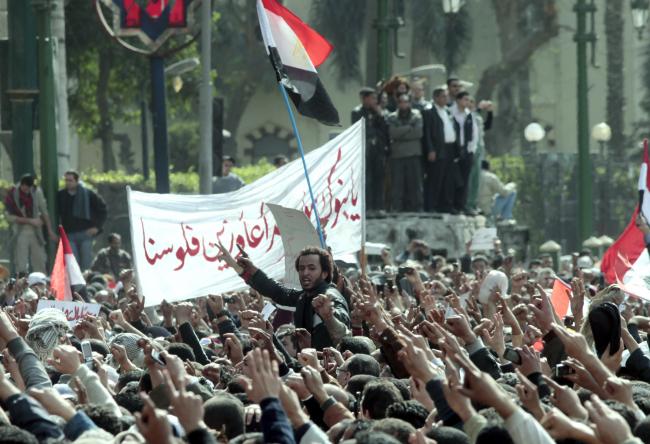 The world will never know what flipped the switch for the people of Egypt. What is clear is that at some point, authoritarian rule became unacceptable and the temptation for democracy too irresistible. After over two weeks of protest, the massive and (relatively) peaceful crusade for freedom prevailed. With the military in temporary power, Egypt’s future remains uncertain. Will the military allow for a transition to a transparent electoral process that the Egyptian people desire? Could chaos and discontent lead to further stagnation throughout the bureaucracy? These are just a few of the questions for which we don’t have answers. It could be weeks, or even months, before a stable course of action is set forth for a peaceful transition of power.

In the last decade, the United States has implemented a very proactive strategy to promote democracy. The clearest examples of such a policy have been the wars in Iraq and Afghanistan. Although democracy promotion may not have been an initial reason for these engagements, it has certainly become a fundamental requirement for the success of these conflicts. That said, regime change in Iraq was not the key to transforming and stabilizing the region.  Moreover, although the U.S.’s message of reform and democratization has provoked healthy debate in the region, the U.S. continues to struggle with ways to convince those actors who reject our involvement.  Implementing a stable democratic regime has proven to be a long and arduous task.  It may be counter productive for the U.S. to attempt to do so. Further efforts at “force-feeding” democracy down the throats of dictatorships would only delay the process in the long-run.

Just as the developed world relies on the “invisible hand” to guide economic growth, the United States should allow developing countries to let the salient benefits of democracy guide them toward political reform. Not only will this allow the United States to distance itself from conflicts regarding democracy promotion, but such an approach might streamline the democratic transition process in other countries as well. The recent protests in Tunisia and Egypt make this claim especially true. These countries have shown that massive displays of discontent reminds the world that governments continue to rule at the behest of their people. If these countries can display the will power to lead a transition to democracy from the inside, the invisible hand of freedom will become more powerful elsewhere.

Not only will these transitions become more likely, but they will also be more stable than a forced transition, like what has occurred in Afghanistan and Iraq. Internally-led transitions engender popular support during the process of regime change. Institutions are established that are developed by the people or the relevant parties in charge. Iraq and Afghanistan may serve as examples of the destructive nature of externally-led political transitions. One of the most common accusations against the two heads of state, Nouri al-Maliki and Hamid Karzai, is that they are puppets of the United States. Such a sentiment fuels discontent and instability. These are just a few of the factors that prove the United States, when hoping to promote democracy around the world, should patiently wait and let the ‘invisible hand’ do its good work.

Arab political systems must increasingly contend with evolving socio-economic realities and the often open participation of political opposition. There becomes a difficulty in drawing a distinction between regime change and democracy promotion. A unstable Lebanon, continued conflict between Israel and Palestine and an increasingly defiant Iran, may demonstrate that political reform in the region may only come from the kind of home-grown, grassroots insurrection witnessed in Tunisia, Egypt Libya, et al.  Thus, the U.S. must strike a balance between the notion of support for those citizens seeking a free society with a laissez faire attitude towards regime change.

The benefits that such an approach would have for the well-being of U.S. national security are immense and obvious. First, our reputation throughout the world would see a dramatic improvement.  Instead of being viewed as interventionist, we will be seen as a benign, yet relevant voice in the political transition process. Instead of war, the United States will be in a position to negotiate affairs peacefully. In Egypt, for example, it was clear that President Obama and the United States had a clear role in Mubarak’s eventual decision to step down. As the primary benefactor of the Egyptian regime for the last quarter century, the U.S. wielded a great deal of influence over the government. Secondly, a less intrusive role in the status of foreign governments will allow the U.S. military to reorient its security strategy. Not only do interventions come at a dear cost to U.S. taxpayers and families, but they would also distract us from potentially more dangerous threats, like Iran and North Korea. With engagements in two countries, a strategy of intervention must be viewed at a premium.  Moreover, it remains to be seen if the U.S. can promote change at the risk of instability in the region, while remaining dependent on oil from Arab countries.

The world witnessed to a truly unprecedented shit of power in Egypt. Not only did a massive civilian effort force a transition of power, but it did so to a regime that had been in power for over thirty years. The situation remains volatile, but there is no doubt that the revolution in Egypt sent a message to oppressive autocracies throughout the region: if the people want change, they will seek it. And those governments are now taking note.

-Will Thibeau ’14 can be contacted at wthibeau@fordham.edu