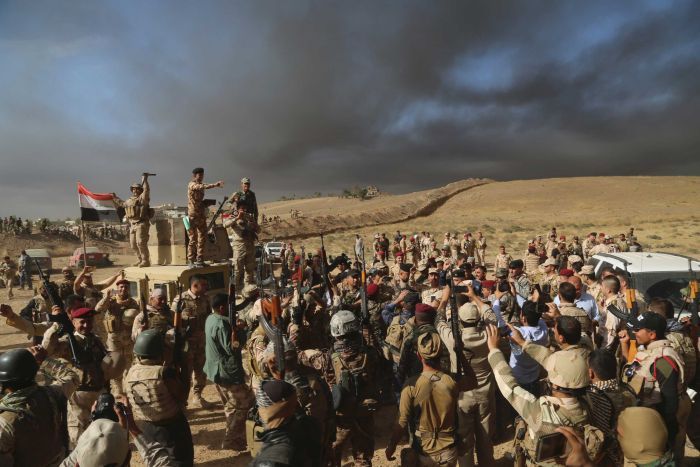 In mid-June of 2014, smoke rolled into the sky above Mosul, the second-largest city in Iraq. Burning Humvees littered streets that had once bustled with people. Only days earlier, the Islamic State had invaded the city, crushing the ill-equipped Iraqi security detail that had been assigned to protect it. The stunning defeat gave the radical group its first strong foothold in Iraq (most of its activity had been in Syria up to that point) and allowed it to use the city as its base of operations in the country. The city’s collapse was another stiff embarrassment to the Obama administration’s foreign policy credentials, in large part because it had openly reflected their inability to correctly evaluate ISIS’s strength within the region. They simply hadn’t seen it coming, and only a few months before the invasion, Obama had unwittingly called ISIS the equivalent of a “JV team” that didn’t have the potential to generate large shockwaves in the Middle East.

Now, a multi-pronged effort led by American-trained Iraqi security forces and peshmerga fighters, backed by U.S. air support, is threatening ISIS’s hold on the city. It’s the perfect storm of elements – a concerted display of cooperation between multiple parties and an approach that’s become much more sensitive to ISIS’s strengths and weaknesses. The importance of the offensive cannot be overstated; if it’s successful, it will essentially eliminate the Islamic State’s remaining influence in Iraq and drive it from the country. It also carries great risk – the mostly-Shia Iraqi security forces will be invading a city dominated by a Sunni population, opening up possibilities of massive sectarian violence that could further inflame the conflict.

A failed invasion could also irreparably damage Obama’s ability to claim anything except marginal success against the Islamic State while in office, and further solidify the sense of overriding futility that has dragged on in that region for years. The stakes are enormous: success could mean the beginning of the end for the Islamic State and the long unwinding of its military and political power; but failure represents the death of the idea that the group might be stamped out anytime in the near future. It could be years before an offensive as sophisticated as this – with a number of well-trained groups composed of differing ethnicities, religious attitudes, and political views – becomes possible again, if at all.

The potential for victory represents an important opportunity for President Obama, who has, in the last year, already begun strategizing ways to shape his legacy. His economic successes have been strong. He resuscitated the auto industry and stopped the country from financial collapse before leading it into strong job creation (though slow wage growth has dampened any cause for celebration). His environmental accolades are well-rounded too, from establishing new preserves to entering the United States into a landmark climate change accord. Even the Affordable Care Act, though its merits are frequently debated, will at least be recognized as a major shift in the way the United States dealt with health-care.

But the largest black eye to the Obama administration’s legacy lies undoubtedly in its efforts with foreign affairs. From the president’s “red line” comment over Syrian president Bashar al-Assad’s use of chemical weapons to the administration’s continued underestimation of ISIS’s strengths, they’ve been forced to watch as the efforts of the U.S. invasion of Iraq have been almost entirely rolled back by increasing violence and terrorism in the country.

There have been bright spots – namely the restoration of relations with Cuba and relatively effective economic sanctions against Russia for its actions in Crimea – but Mosul represents Obama’s last real opportunity to reshape his battered foreign policy legacy with only months left in office. If the city is retaken, the blow against ISIS will be devastating, and it would almost certainly be looked upon as one of the moments the tide finally turned if the group is destroyed. The Islamic State’s last real stronghold would inevitably fall to Raqqa, Syria, opening the potential for the United States and its allies to focus more clearly on its strategy there. Obama needs a foreign policy victory, and reclaiming Mosul in a solid showing of solidarity with the Iraqi Army and the peshmerga forces can give him one.