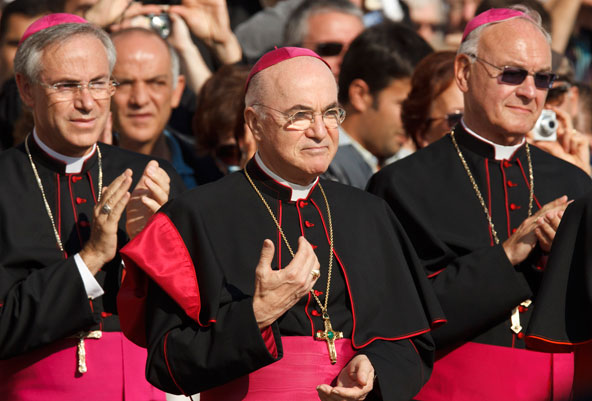 This past August, former papal nuncio Archbishop Carlo Maria Viganò released a revelatory letter that detailed how Pope Francis was well aware of ex-Cardinal McCarrick’s heinous clerical abuse. This scathing letter divulged that Pope Francis not only lifted sanctions placed on the sexual predator by Pope Benedict XVI, but also covered for him, even making McCarrick his “trusted counsellor.” While many have discredited the 11-page epistle merely as a far-right tactic to oppose the Jesuit Pope, this bombshell report is undoubtedly concerning, especially since the Vatican has remained silent and neither denied nor addressed these claims. This has left many demanding further responses from the pontiff, who has instead deferred to “silence and prayer” during these most tumultuous times.

However, despite the potential danger, many prelates have courageously defended Viganò’s claims. For example, Cardinal Raymond Burke said that, “the declarations made by a prelate of the authority of Archbishop Carlo Maria Viganò must be totally taken to heart by those responsible in the Church.” Burke continued in speaking to the validity of calls for the Pope’s resignation if these allegations are proven true. Similarly, Monsignor Jean-Francois Lantheaume also spoke to the veracity of these claims and questioned Francis’ taciturnity in the wake of these searing allegations, equating his silence to cover-up. In addition, Viganò recently broke his silence and doubled down on his original letter, stating that his testimony was published “during a crescendo of continual news of terrible events, with thousands of innocent victims destroyed and the vocations and lives of young priests and religious disturbed,” and asserts before God that it is true. Viganò also released a third letter that countered Cardinal Marc Ouellet’s criticism of his original testimony and invoked God as his witness to these claims.

Others, like Cardinal Blaise Cupich of Chicago, rejected the letter and came to the defense of the Holy Father. In an interview in September, Cupich egregiously suggested that the Church should not go down a “rabbit hole” on the issue of sexual harassment, and ought to instead focus on ostensibly more important issues such as the environment and protecting migrants. The sullied Cardinal, a known supporter of the heterodox pro-LGBT rights, is currently in the midst of a crisis of his own, as he recently removed a priest from his archdiocese who burned a rainbow pride flag. This priest, Father Paul Kalchik, says he was the victim of clerical abuse when he was a teenager, and has since been forced into hiding “out of fear that Cardinal Cupich would take him away by force,” which is what he told the Catholic news agency Church Militant in a recent interview. Cupich echoed the Pope’s sentiments that the current crisis has little to do with homosexuality and is instead the product of “clericalism,” and was also named in Viganò’s letter as one who is directly involved in the cover-up of the hierarchy’s homosexual corruption.

(I’d be neglectful if I failed to mention that while Abp. Viganò and Father Kalchik are living in a state of fear for the wrath of the Vatican for bringing to light possible heresy within the hierarchy of the Church, disgraced ex-Cardinal McCarrick was sentenced to a rather peaceful life of prayer and penance in a Kansas friary, not too distant from an elementary school.)

Similarly, the embattled Cardinal Donald Wuerl, who recently resigned as the Archbishop of Washington DC, has repeatedly denied that he had any knowledge of the years of sexual misconduct complaints involving McCarrick, his predecessor. However, new revelations from the Washington Post have emerged that may dispute his claim, as Wuerl was among those named in a 2005 abuse settlement agreement that included allegations of McCarrick’s harassment. Father Patrick Ciolek was one of the many seminarians abused by McCarrick and stated that it is “inconceivable” that the diocese would have failed to notify Wuerl, who at the time was the Bishop of Pittsburgh, where Ciolek was located. In his original letter, Viganò denied Wuerl’s ignorance, and said that as McCarrick’s successor, he would have been “the first to have been informed” of the harassment, the impetus behind his resignation.

Likewise, other prelates in the United States were also mentioned by Viganò, including Cardinal Sean O’Malley of Boston and Cardinal Joseph Tobin of Newark, which is why many theologians and lay leaders alike have called for the U.S. bishops to follow their Chilean brethren and resign en masse. They see it necessary for the Church to be purged of its clergy here in the United States, and as one letter stated, “Only then might the wrenching work of healing begin.” For the Catholic Church to rise from the ashes of its worst scandal in modern times, a mass resignation should occur immediately. And only then should Pope Francis, if these allegations prove true, follow suit “to set a good example for cardinals and bishops who covered up McCarrick’s abuses and resign along with all of them.” Yes, this would be unprecedented, but so are these accusations, and the only true way for Catholics across the world to feel at peace with the leadership of the Holy See moving forward.

Now, the crux of the aforementioned issue is clear, and all involved directly or in the cover up need to be purged from the Church at once. As affirmed by Father Dominic Legge, “In the main, the persistent problem is with homosexually active priests.” Others, such as Father David Marsden, have also noted this deeply concerning presence, calling the Irish seminary a “cesspool of liberal theology and heterodoxy.” Whether this prevalence within today’s seminaries is due to communist infiltration, as discussed by former Fordham student and professor, Dr. Alice von Hildebrand, and Communist agent, Bella Dodd, or other problematic lack of accountability structures, remedies must be adopted to ensure the holiness of the priesthood, episcopacy, and Church.

In order to combat this prevailing crisis, Catholics must not be complicit. Laymen have been encouraged to withhold any donations to the United States Conference of Catholic Bishops until those involved take responsibility for their misdoings. In addition, at the USCCB’s annual meeting – which will be held from November 13-14 in Baltimore, Maryland – demonstrators will be organizing the Silence Stops Now campaign to demand the end of this deafening silence, the resignation of those involved in the cover up in any way, as well as an investigation and a prosecution of any criminal activity.

Finally, and most importantly, as students of a prominent Jesuit institution, I encourage all to be knowledgeable of these grave accusations and we likewise mustn’t simply dismiss these claims because we are led to believe they are false by those in positions of authority. The von Hildebrands who have spoken to the corruption, and many mentioned in Viganò’s original testimony have close ties with this University, including McCarrick himself who graduated from Fordham and was one of the most revered alumni of this institution. Further, Carlo Maria Viganò spoke in 2014 at an event promoting Catholic education, at which Fordham leadership was present. Lastly, Father Martin, who has married himself to the spirit of this age in his quest to normalize “being gay,” contrary to the Church’s longstanding teaching, and a regular presence on campus, was referred to by Viganò as someone who “chooses to corrupt the youth [and] is nothing but a sad recent example of that deviated wing of the Society of Jesus.”

In these trying times within the Church that traces itself directly back to Jesus Christ, we must be vigilant, and not succumb to the hypocrisy of those in power. Viganò has shown immense bravery for releasing these truths, and all should pray the healing of the Only Holy and Apostolic Church. Despite these trying times, Catholics should remain faithful and optimistic because, in the prescient words of Hilaire Belloc, “The Catholic Church is an institution I am bound to hold divine — but for unbelievers a proof of its divinity might be found in the fact that no merely human institution conducted with such knavish imbecility would have lasted a fortnight.”