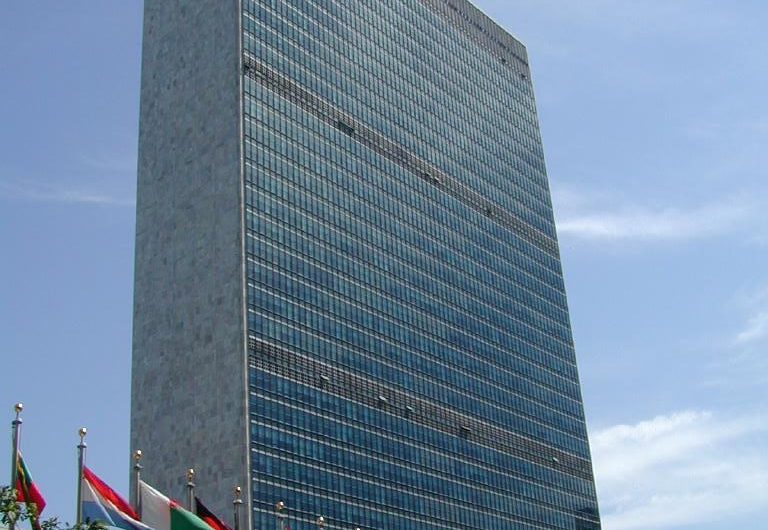 In the hope of never again experiencing the same kind of fear that enveloped the Cold War, the post-Cold War era was intended to usher in a time of collective peace and global prosperity.  States worked with multilateral security aims, in an effort to maintain and defend the existing stability of the world order.  Although numerous other organizations have emerged, such as NATO or the African Union, since its inception, the one organization that the world has come to recognize as the ‘international community,’ and rely on for the international maintenance of security and justice, is the United Nations (U.N.).  Run on a platform of multilateralism, and fashioned as a means of protecting and preserving peace and stability, this kind of collective security “involves states in the international system coming together to act under an agreed set of norms, principles and rules, to defend an existing security order from a threat or attack.” Although state sovereignty and independence prevailed as the modus operandi even prior to the creation of the U.N., meaning that each state ruled and governed itself and dealt with conflicts using its own methods, this shift towards the collective enabled the U.N. to develop a motive for circumventing the issue of sovereignty.  In the case of states that are unable to control conflict within their own borders, thus jeopardizing human security and increasing the possibility of negative ‘over flow’, the sovereignty of that state is waved in favour of international intervention.  This allows the international community to intervene in that state, based on U.N. principles and the responsibility of the organization to protect both the citizens and states of the world.

According to some analysts, however, whether there exists an obligation or not, international organizations should refrain from interfering in the internal conflict of nations because war, in and of itself, “can resolve political conflicts and lead to peace.”  The argument is that intervention by the international community only results in ‘pausing’ the conflict as opposed to eliminating the true cause of the antagonism between the participants, thereby allowing for the possibility of renewed combat following the departure of the interveners.  As such, rather than helping to end conflict, military forces and NGOs simply aggravate the problem, namely by pursuing their own agendas and protecting their own interests (e.g. preventing the deaths of military personnel and using war situations to increase charitable donations).  In short, if the conflict is not allowed to unfold in its entirety, any kind of intervention is not only futile, but exacerbates the harm.  However, the problem with this reasoning is that, although intervention is often an imperfect solution, the complete absence of U.N. involvement may prove to be even more disastrous.  Additionally, although possibly being effective in some instances, allowing certain conflicts to persist unabated is more often perceived as morally reprehensible to a world that has come to rely on the cohesive effort of the international community as a vehicle for peace and reconciliation. Ultimately allowing certain internal conflicts to simply burn themselves out is in reality, and by consensus of the international community, neither ethically nor morally justifiable in any circumstance.  So why is it that U.N. interventions are so often determined to be failures?

Reliance on one another has always been a natural tenet and necessity for humankind, and the subject of international security is no exception.  Benefits of the organization are based on the old adage ‘united we stand, but divided we fall’, and burden-sharing is considered a key-stone element.  Collective intervention in conflicts under the auspices of an unbiased organization is thus viewed as a virtuous idea that can generate an increase of international respect and goodwill, while at the same time spreading the issue of responsibility thinly across all states involved.  The successes of the U.N. are shared, while no state can be deemed exclusively liable for the organization’s failures.  It would seem, therefore, that when intervention is based on collective agreements, the sincerity and legitimacy of U.N. missions cannot be questioned.  Everything is a shared operation, from financial responsibility to military power to respectability and beyond. The problem is that, from its inception to today, the U.N. contains within it the seeds of its own demise and the primary reason why interventions by the organization have a tendency to fail.

It is often suggested that the failure of intervention efforts undertaken by the international community does not lie in the inherent intention of intervention itself, but in the covert ‘behind the scenes’ activities of the organization seemingly in charge.  Albeit a noble and fanciful idea, the very core that keeps the U.N. running, namely an expressly voluntary system composed of individual member-states, is what tends to hamper the actual practice of multilateral intervention and collective security.  The fact is that interventions for internal conflicts are based upon the funding, resources, and authorization of these numerous states, and any lack of adequate member-state support for missions undertaken by the international community produces insufficiencies and leaves the prime objectives of such operations vulnerable.  It is often argued, therefore, that the U.N.’s intervention operations are incessantly hindered by its member-states, from their bureaucratic bickering to their lack of political will and everything in-between. Essentially, the organization is impotent unless it has the agreement and consent of the majority of its members in decision-making.  Nothing can be accomplished within the organization, or through it, without the collaboration of its members since “the United Nations has no armed forces of its own, no power of arrest, no authority to tax, no right to confiscate, no ability to regulate, no capacity to override treaties.”  As such, arising from this primary issue, are a number of related problems that have the potential to obstruct or prevent adequate intervention missions from being launched.  Sadly, this not only heightens and perpetuates the unending global concern regarding human and international security, but it is also helping to gradually erode the legitimacy and respectability of the U.N. as a world organization.  Although it must be understood that intervention is not a ‘quick fix’ operation, critics are often justified in chastising the international community for its intervention blunders.  After all, it is said that ‘a house divided against itself cannot stand,’ and unfortunately, on too many occasions, the U.N. has proven to be such a fickle and unstable establishment.

Indisputably, however, regardless of the extent to which the U.N. attempts to ‘fix’ its problems, any intervention operation will, in its own fashion, have its own flaws.  Nevertheless, when viewed in a wider context, intervention is the most viable tool available to the U.N. for suppressing intrastate violence and ultimately safeguarding the security of an increasingly integrated and vulnerable world.  It is clear that the U.N. is by no means an infallible institution, yet it can be argued that it is the only multilaterally respected solution available, willing to attempt to rectify the problems of the world.  Therefore, the international community has taken it upon itself to actively and repeatedly involve itself in internal affairs, despite a track record riddled with failures when it comes to intervention in the internal conflicts of nations.  The road to successful intervention needs to be a learning process, one in which the successes and failures of past situations are consistently reviewed, coupled with a recognition that each conflict has its own unique dimensions to consider prior to decisions being made about intervention.  In other words, the international community must consistently take into account the fact that what may have worked in past conflicts, may not necessarily work in today’s conflicts.  Rather, new policies must be developed and/or refined in order to accommodate the uniqueness of conflicts, as well as to anticipate the overall effectiveness of intervention.

With the shift from interstate to intrastate security concerns, the responsibility to protect has been assigned to the only institution that has come to represent the international community as a whole, the United Nations.  Like a modern day Atlas, “a Titan who supported the heavens by means of a pillar on his shoulders,” the U.N. is looked upon to support the world and its security by means of the pillars in its Charter.  As such, the importance of examining such a controversial topic as international intervention is precisely because it takes wisdom and thoughtful analysis to develop formulas to deal with instability and chaos within the international realm.  We must, nevertheless, be mindful of the fact that international intervention is, in itself, an imperfect plan towards the settlement of internal state conflicts.  When all is said and done, however, if states within the United Nations could learn to truly function as a united front working to manage conflict and injustice within the world, then the failures of the organization might be significantly reduced. Nevertheless, the responsibilities of international intervention have undeniably been given to the international community and, accordingly, it has both a right and an obligation to take whatever actions it deems necessary in times of crisis and conflict that prove detrimental to our world.  The world, quite frankly, would not have it any other way.

390 thoughts on “Jack of All Trades, Master of None: the Question of U.N. Intervention”