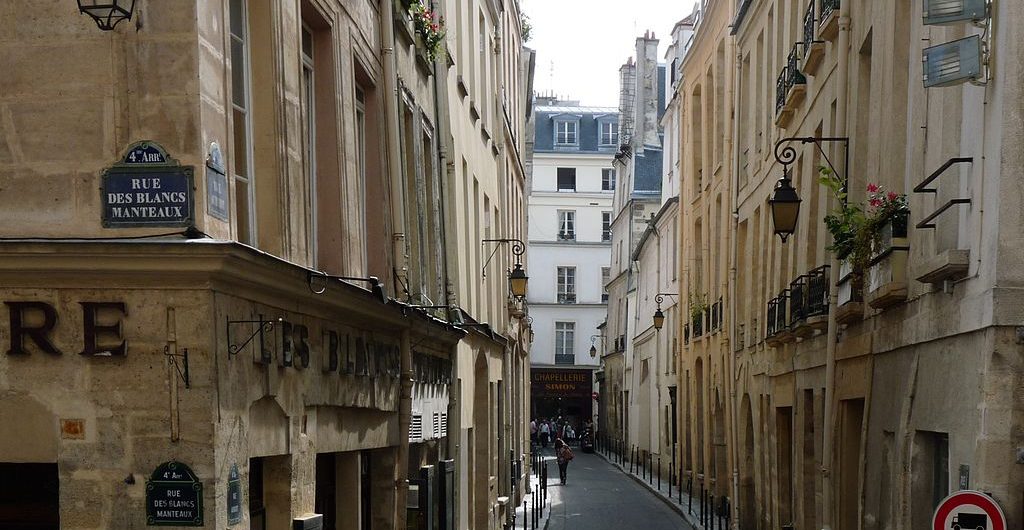 On The Right Bank, located in central Paris, nestled amongst the third and fourth administrative districts, sits a quaint district called the Marais. Today, the neighborhood is home to designer clothing boutiques, haut stationary ateliers, and exclusive chocolate and macaron shops. Its North American equivalent is SoHo, but the Marais, for the most part, boasts more cobblestoned streets and other architectural accents.

Long before a three-storied Starbucks positioned itself as the centerpiece of the Marais’ Rue de Rivoli and Sandro became the crown jewel at the intersection of Rue Vieille du Temple and Rue des Franc Bourgeois, the Marais played host to an extensive history of shifting cultural identities. The result is a neighborhood with falafel shops, Jewish bakeries, and the occasional gay bar.

While Jews remained the core inhabitants and proprietors of the Marais throughout the nineteenth and twentieth centuries, rapid gentrification forced families and store owners to the outer districts of Paris. Between the end of the twentieth century and the beginning of the twenty-first century, gentrification created an exponential string of closures in the Jewish sector of the Marais. This quick change of population and store ownership illustrates the constantly fleeting — and fluctuating — nature of the area.

In 2008, one of the last remaining kosher restaurants in the Marais closed its doors. Many other Jewish shops and restaurants have followed suit. Two years later, a restaurant once celebrated for its potato latkes and matzo ball soup reopened as a denim shop.

While the Marais has lost much of its Jewish heritage and culture, it remains a recognized area and meeting place for Jews in Paris. Florence Finkelsztajn, a Jewish Boulanger who owns a bakery on Rue des Rosiers, argues that “people [Jews] come here to taste their roots. The Jewish community lives split up, so it’s important to have a place to meet.”

After the Jewish population changed the landscape of the Marais after the French Revolution, the gay population greatly shifted the demographic of the district in the 1980s, despite the immediate oddity of a gay population suddenly moving to and gentrifying the Marais.

The gay population did not take a silent residence in the Marais, but rather created a tangible gay image and identity through business. Although new residents originally moved to the Marais along with other young professionals as part of Giraud’s social homogamy, the result was the creation and development of a gay distinctiveness and uniqueness to businesses throughout the district.

The gay population certainly was not the sole catalyst for the renaissance of the Marais towards the end of the twentieth century. Beginning in the 1960s, the government implemented transportation programs, housing policies, and cultural initiatives that all contributed to the rapidly changing landscape of the Right Bank neighborhood. The government introduced La ZAC Les Halles in 1969, an enormous metro station and shopping center. In 1977, the French government presented an even bigger and more important transportation hub, the Châtelet – Les Halles RER Station. The addition of modern infrastructure greatly increased traffic and accessibility in the Marais. The centrality of the Marais increased in value as transportation hubs began to spring up, and the real estate of the area became more desirable to developers and gentrifiers.

Besides state-sponsored transportation decisions, government housing policies were crucial to the speedy gentrification of the Marais. Sociologist Rowland Atkinson recalls that “in 1986 the change in government from Socialist to Gaullist brought an end to rent control, and the Marais, once the most densely populated district of Paris, gentrified immediately.” The rent increases were neither slow nor minor. Julio Sampaio, professor at Federal University of Juiz de Fora, writes that “rents that had averaged around 200 francs increased to about 1,500 francs, despite the concern of Societé d’Economie Mixte pour la Restauration du Marais to keep them in place.” The Societé d’Economie Mixte was a grassroots movement that strove to keep some rent control in the area. Unfortunately, the group was no competition for the government-sponsored dismissal of rent control, and rent tariffs inflated to almost eight times their previous standard.

The 1960s was not the first decade in which the government enforced housing policy in the Marais. Mitchell Levitas wrote in The New York Times that in 1605, “Henry IV commissioned a residence a grassy square, called it the Place Royale, and gave the rest of the land to 36 noblemen on condition they build nine identical mansions on each side of the 153-yard-long square.” This area, or Place des Vosges, still stands today. Other hôtels particuliers built around the same time made the Marais a vastly upper class quartier. In the seventeenth century, the Marais was primarily an aristocratic district inhabited by wealthy noblemen. While the aristocratic society commanded the area for a couple of centuries, the French Revolution caused what National Geographic author Cathy Newman described as “a gradual descent into slum, serving also as the Jewish ghetto (by custom, rather than law).” This extreme demographic landscape shift, from aristocracy to working class poor, is demonstrative of the Marais’ constantly fluctuating nature.

Because the area had fallen into a slum-like expanse, the French government decided to revitalize by means of cultural exploitation through acts such as la loi Malraux. La loi Malraux (a movement similar to the United States’ National Register of Historic Places) was an almost necessary law in order to revitalize the dwindling and increasingly slummy neighborhood. A bounty of empty, yet intact, hôtels particuliers – left over from the aristocratic class – still knit the district. These former residences, through la loi Malraux, became the perfect settings for cultural projects like museums. Biographer-historian Herbert Lottman relates that at the time the government enacted la loi Malraux, the district “had more substandard housing than any other in Paris; 30 percent of the dwelling units were without running water, 68 percent without private toilets.”

Government-sponsored additions such as five new museums were beneficial for the Parisian cultural scene and contributed to the attractiveness and charm of the district. The inauguration of new culture in the Marais, combined with the nearby transportation hubs and low rent rates, lured investors and quickened gentrification. At the same time, these policies, through their ambition to revitalize the neighborhood, displaced half of the population.

The Marais has been gentrified to the point in which the neighborhood has developed a “museum quality,” wherein hotels, restaurants, galleries, and internationally recognized boutiques have replaced residences. These establishments greatly increase rent in the area, transforming the Marais from a residential working class neighborhood to an international nexus for fashion and art. On the same cobblestoned streets where Jews once ran daily errands between the kosher market and boulangerie, today stick figure-thin girls in gallery boots and black, floppy hats flick cigarette butts in between visits to the Kooples and La Maison du Chocolat.

In the case of the Marais, many argue that gentrification was necessary to impede the area’s fast descent into slum. At the same time, gentrification has become exponential and far-reaching. It has forced Parisians — not just of the low working class — out of the city’s center, leading to the overall museum quality of the city.

The Marais has always been changing. It went from a Jewish population to an aristocratic Eden, to a Jewish ghetto, to a gay haven, and, now, a gentrified museum district. Despite this, there is little reason to believe it will be changing anytime soon. Because the rent in the area has increased so heavily, and because international brands and hotels have established themselves in previously residential areas, very few Parisians can afford to live in the district. It is a textbook example of why Paris is quickly becoming a museum city.