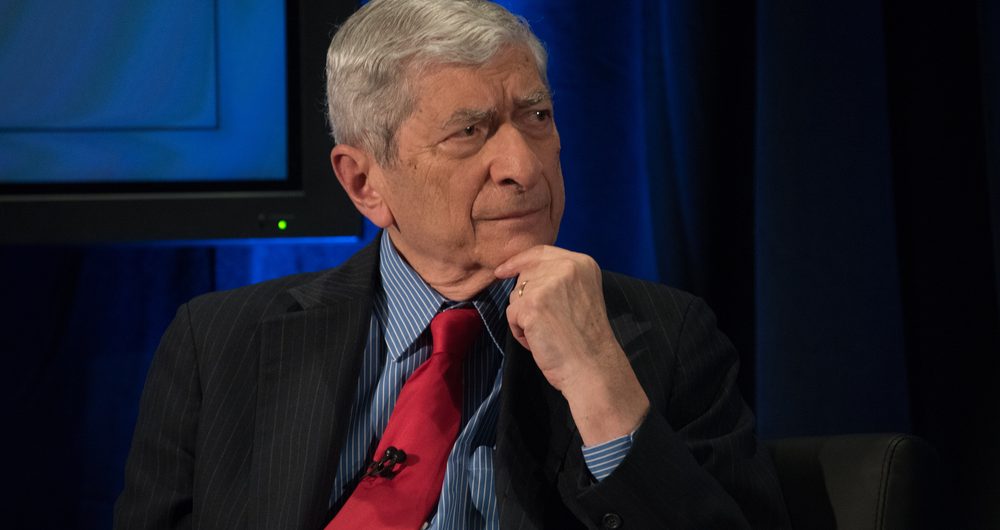 In a career spanning more than three decades, Marvin Kalb has worked at both CBS and NBC News, where he served as moderator of “Meet the Press” from 1984 to 1987. He holds numerous awards for his work, which earned him a spot on President Richard Nixon’s “enemies list.” Kalb is also the author or coauthored 12 books and the host of The Kalb Report.

What do you think is the biggest challenge facing journalists today?

I believe the biggest challenge is to find a workable financial system for sustaining a vibrant journalistic force. Without that financial structure — which is under siege right now and has been for 10 or 15 years — without a new way of financing journalism, we’re going to lose the heart and soul of journalism, and we’ll all just end up as entertainers. And I think that would be horrible, not only for the journalists but for the country.

A second important point is that we are giving too much time and attention to the entertainment factor in journalism rather than the substantive factor. What is happening is what is important, not the color of the hair of the anchor providing us with that bit of information. We’ve got to go back to the origins of fact. How do we know something to be true? How can we trust the person who is providing the news to us? Are we the beneficiaries of journalism or entertainment? And that to me is the second large question stemming from the absence of an acceptable economic underpinning of the industry.

Do you fear that that’s incompatible — finding a sustainable business model with also being true to the facts and the hard news, not necessarily the entertainment aspect?

Do you see the role of the news media changing today with the upcoming Trump presidency?

Two answers to that. The function of journalism has not changed. The journalist is still there to provide the information so that the public can make up its mind. Trump is, in my judgement, going to be a unique president in the sense that we have never before had someone with so little experience in major domestic and international issues. He is a businessman who has been both very successful and then, on occasion, not so very successful in the area of real estate. But that is not the same thing as negotiating an agreement between the Israelis and the Palestinians. He tends to see everything as a deal.

Where journalism comes in here is that he, in my opinion, took journalism for a ride during the campaign, most especially cable news. He became effectively the executive producer of every cable news show for 15 months, adding up to something like $2 billion in free airtime. He is going to strike deals with those journalists he feels he can trust. Good journalists will not engage in those deals, and he is going to find that it’s very difficult to seduce an entire world of journalism, but it is seduce-able. And my deepest fear is that in six months to a year into his time as president, he will have the media eating out of his hand. I’m not saying he’ll control everything, but he will have the dominant influence on the way in which events are covered.

He is his own producer. He measures success in his own way. He needs the media, yet hates the media. And that balance between need and hate will determine a good measure of his success as a president because if you can persuade enough people that what you are doing — regardless of what you are doing — is a good thing, then you’ve got it made.

What can journalists do to work against that?

Keep your distance. Even if with Trump it’s going to be — if he reaches out to you and wants to envelope you in his world and give you good stories and make you a great success, and you say, “No, I will stay out here and just look and cover,” he’s going to put distance between himself and you. And you’re going to find where it was sometimes with Nixon and his crowd — there was always a distance that he put. But Nixon was very unlike Trump. Nixon was a career politician. Trump is up to this point a career narcissist.

Do you think the journalist has a responsibility of speaking out in some way?

He doesn’t have a responsibility to speak out. He has a responsibility to cover the news, and if the news speaks out about something, good. If it doesn’t, also good. The journalist is not there to pull down Trump or to enhance Trump. He’s there to cover the news, and if he does — that in this world of entertainment and big money contracts and all, people can easily be enticed into believing that journalism is become a Hollywood enterprise. It isn’t. It is most of the time a boring job where you’re going around getting information. Some of it isn’t worth a hill of beans, and you put it out in the paper. But every now and then you’re on to something that is really good, and that is worth everything. And that is the excitement of being a journalist. It is the pursuit of new information presented in an honest way, and try to win back your audience because we have been so over — we have been made so cynical toward everybody and institutions today.

It just didn’t just start with Trump, and it didn’t just start in the last couple days. It’s been going on for about 20-30 years now. It’s been a steady whittling down of general respect for the major institutions of American life. And it is not an accident that what remains fundamental to most Americans: 1) their faith, 2) their faith in their military, and the boy scouts, the old solid institutions in society. But almost everything else, starting with the Congress and going to the president, has been subject to withering criticisms and left in a state where the American people are simply confused as to what it is they can trust and what it is that they can’t.

I have a feeling that sometimes from a lot of the students that I talk to at many different universities — this is not just Fordham — that many have lost their faith in the institutions of American democracy. And what I try to say to them is that the institutions remain as solid and strong as ever, except our appreciation of them. And that relates to the way in which we acquire our information about the world. And to the degree that we continue to acquire the information mostly from the internet, we’re going to be in trouble. Information from the internet may be good, it may be bad. I think that we have to be very careful about that, more careful about that than anything else.

What advice do you give to young people who are aspiring to be journalists?

Remember the essence of journalism is an honest, curious pursuit of new information that will help people understand an increasingly complicated world. To the degree that the journalist accomplishes that modest goal, he or she is doing God’s work.

I like that. Thank you very much, Mr. Kalb.

This interview has been edited for clarity and was co-published with The Fordham Ram.