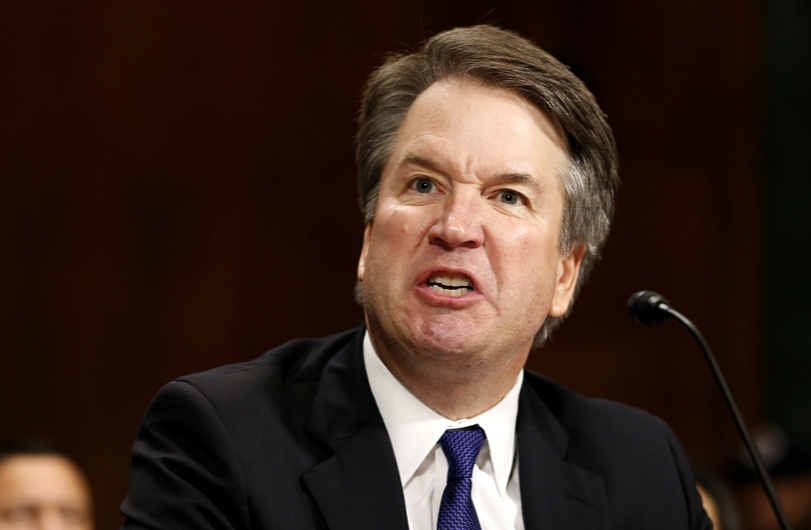 It feels like ages agoーpop culture from a distant eraーbut Brett Kavanaugh was nominated for United States Supreme Court Justice of the United States just over two years ago on July 9, 2018. After President Trump announced him as his choice to succeed Justice Anthony Kennedy, the Senate Judiciary Committee received witness testimonies concerning his nomination.

The court was informed that Christine Ford, a former classmate of Kavanaugh’s, had written a letter to Senator Dianne Feinstein detailing a sexual assault back when the news of his confirmation first broke. Trump’s nominee was already sparking controversy for his conservative background and the news of the account ignited a wildfire of response. The committee postponed its vote and invited Ford and Kavannaugh to testify at a public hearing on September 27.

Following days of speculation, Ford decided to go public with her story in an explosive interview with the Washington Post on September 16th.

She alleged that at a house party in the summer of 1982 Kavanaugh and a friend, both intoxicated, physically cornered her into a bedroom. While his friend watched, Kavanaugh pinned her to the bed and attempted to rip her clothing off, putting his hand over her mouth as  she tried to scream. Ford, now a respected research psychologist in California, admitted, “I thought he might inadvertently kill me. He was trying to attack me and remove my clothing.” Ford said she was able to escape after a friend saw the assault and tackled Kavanaugh, giving her enough time to flee the room and briefly lock herself in a bathroom before leaving the house. After coming forward with her story, two more women accused Kavanaugh of past instances of sexual assault.

After Ford went public with her account, Kavanaugh released a statement saying, “I categorically and unequivocally deny this allegation. I did not do this back in high school or at any time.”

Kavanaugh and Ford testified before the Senate judiciary Committee on September 27. The next day, as Kavanaugh’s emotional defense appeared in headlines across the country, the nomination was forwarded to the full senate on a 11-10 vote. Following an FBI investigation into the assault allegations, including a polygraph test that Ford passed, the Senate voted 50-48 to confirm Kavanaugh as the new Supreme Court Justice.

Backed by a majority of Republican congressmen, many supporters believe that his behavior in high school has no hindrance on his compatibility for the nation’s high court. However, critics such as Ford’s husband Russell argue that people “look to judges to be the arbiters of right and wrong” and “if they don’t have a moral code of their own to determine right from wrong, then that’s a problem.” He went on further to state that, “Supreme court nominees should be held to a higher standard,” than your everyday attempted rapist.

The nation has since moved on from one of Donald Trump’s greatest publicity crisis to another and Kavanaugh has seen little press coverage. With a new, controversial nominee to the United States Supreme Court and a federal election underway, Trump’s token bad boy is a distant memory. On a panel of 9 of the most powerful judges in the country, his influence is nothing to glaze over. So what has Brett Kavanaugh been up to these days?

Upon hearing of his nomination, Democrats quickly became nervous about Kavanaugh’s conservative track record. Dr. Adam Fieldman, an acclaimed professor of political science at UC Berkeley, expressed the left’s fear that he would become, “another justice on the far right who will inevitably push the Supreme Court into a conservative era perhaps like never seen before.” Following the 2019 term, Kavanaugh’s score on the Martin-Quinn test marked him as the 5th most conservative judge on the panel.

Before Kavanaugh’s nomination, the Trump administration made clear its intent to find a candidate “devoted to a legal doctrine that challenges the broad power federal agencies have to interpret laws and enforce regulations, often without being subject to judicial oversight.” Trump’s first nominee, Justice Neil Gorsuch, followed through on this criteria in his criticism of the Chevron deference. This administrative principle tests the separation of powers, allowing independent agencies and the federal branch to be “extremely aggressive in trying to pass policy through agency action.” Kavanaugh has since adhered to this model, questioning the legality of conflicts defended by the doctrine where he believes there to be a violation of “the neutral, impartial rule of law.” He believes the Chevron doctrine allows independent agencies to assert unwarranted influence in the legislative process, as a “headless fourth branch of the U.S. Government.” However, he is not completely anti-Chevron, as he believes that its application “makes sense in certain circumstances.” His main argument is that the doctrine is often used to defer policies to agencies that are ill-equipped to handle them. Where the Trump administration is more broadly-opposed to Chevron, Kavanaugh looks at each case individually to weigh its constitutionality.

The Supreme Court oversaw the 2019 case of McKinney V. Arizona, authoring a 5-5 majority opinion concerning the habeas corpus review in cases involving the death penalty. Joined in the majority by Chief Samuel Alito, Neil Gorsuch, Clarence Thomas, and John G. Roberts, Kavanaugh withheld that a state appellate court can conduct a re-evaluation of aggravating and mitigating circumstances on habeas corpus review in cases involving the death penalty. The minority opinion -held by Justice Ruth Bader Ginsberg, Stephen Breyer, Sonia Sotomayor, and Elena Kagan- insisted that because the death penalty was sought based on aggrevating factors presented to a judge rather than a jury, the ruling was unlawful.

In the 2019 Supreme Court case Barton V. Barr (removable offenses in deportation case), Kavanaugh authored a 5-4 majority opinion alongside Justices John G. Roberts, Clarence Thomas, Neil Gorsuch, and Samuel Alito. The decision held that citizenship should not be revoked for immigrants who have committed an offense of up to $1182 during the first seven years of their residency.

In the 2018-19 Apple v. Pepper case, Kavanaugh joined the majority in voting against App Store monopolization. He was joined by Justices Breyer, Ginsburg, Sotomayor, and Kagan. In the bipartisan ruling, the court decided that because users purchase apps directly through Apple’s App Store, they are eligible to join an antitrust lawsuit against Apple for increasing app prices and monopolizing the e-market.

This wasn’t the only occasion he sided with the liberals. In a case involving a Buddhist man on death row who requested to have his spiritual advisor present at his execution, Kavanaugh and Roberts sided with the Liberal Justices in favor of granting the request. The other 3 conservative judges wrote a critical letter, condemning the majority vote as “seriously wrong.”

Ever since the surge of Conservative Justice nominations, the proceedings of the U.S. Supreme Court have been under close scrutiny. Kavanaugh, a highly controversial candidate from the beginning, has surprisingly stayed out of mainstream news. He tends to side with Republicans on most cases but follows his conscience on bipartisan issues. After his nomination in 2018, Court Justice Sonia Sotomayor was the first to stop by his chambers to welcome him. “The nine of us are now a family” she told CNN, “and we’re a family with each of us our own burdens and our own obligations to others, but this is our work family, and it’s just as important as our personal family.”

In his day-to-day work schedule, Kavanaugh has maintained the rigor for which he was known in the lower courts. He drinks 6 to 8 Diet Cokes a day, writes quickly, and prefers short bench memos from his clerks: at most 10 pages. Sarah Pitlyk, who clerked for Kavanaugh in the D.C. District, remembers his attention to detail. “He’s an excruciatingly careful writer. Everything had to be technically perfect before it was circulated.”

Members of Kavanaugh’s social circle say that while the hearings awakened an emotional side to the Court Justice, it hasn’t fazed his work ethic. “He just doesn’t talk about it,” says Maura Kane, a family friend. Kavanaugh is rarely seen in public but is occasionally spotted under a downturned baseball hat. He keeps a bible in his office tabbed to Matthew 25, which reads, “I was naked and you clothed me, I was sick and you visited me, I was in prison and you came to me.” In spite of his questionable past, Kavanaugh seems hopeful that his legacy on the Supreme Court will someday overshadow the controversy.