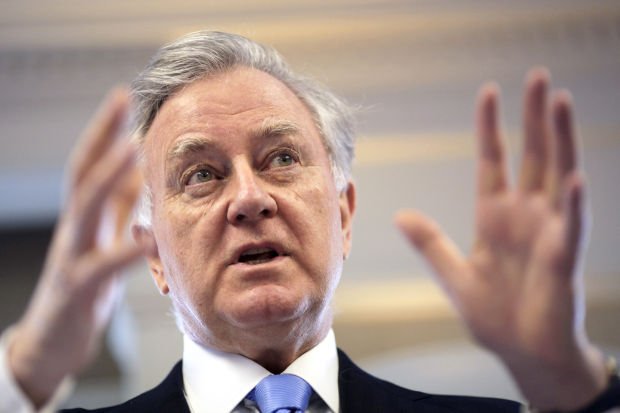 What is your most outrageous college dorm story? Here’s mine.

It was a warm but windy Wednesday afternoon. After the high winds caused my fruit punch to splatter all over my beloved peacoat, I furiously opened the door to my room to vent about the weather. It is a usual routine and, admittedly, a bad habit of mine to complain about things that are completely out of my control. But something was different. Jacob Linker, the president of the College Libertarians and a personal friend of mine, invited an unusual guest to my room. Greeting me with a warm laugh, this man distinguished himself with a small U.S. Congress pin on his jacket. My eyes widened in disbelief. Senator Larry Pressler was in my room.

Entering national politics from South Dakota, Larry Pressler served in the House of Representatives from 1975 to 1979, and later served three terms in the Senate. He was briefly the chairman of the Senate Commerce Committee from 1995 to 1997 and authored the Telecommunications Act of 1996, a groundbreaking law which deregulated the telecommunications market. His career in the Senate came to an end when he lost reelection to Democratic Congressman Tim Johnson while running for a fourth term.

Pressler is not what you would consider a normative Republican by today’s standards. He endorsed Barack Obama in the 2008 and 2012 elections, and hit the campaign trail for Hillary Clinton in 2016. This rendered his name taboo within his former party, with many Republicans labeling him as a turncoat.

Senator Pressler arrived at the Keating Auditorium that same Wednesday evening, engaging in friendly conversations with many students before his speech. This event was unusual compared to others hosted at Fordham in the past year. Two past events, featuring Roger Stone and Al Sharpton respectively, fostered an inflammatory environment of controversy among students. But Pressler’s speech seemed accommodating and informative. He addressed issues such as public service, negative media press, and the importance of young adults entering the realm of politics. “You should join the party you least dislike, and try to make it better,” said the former senator.

Pressler, now 76 years old, seems to live rather simply and relaxed. He is passionate about music, and plans on continuing school to study the subject.

The Senator’s parting message was optimistic and inspiring. After attending a dinner at Enzo’s, I received an email from Jacob Linker, who sent a thank you message from the Senator himself:

As I celebrate my 76th birthday, I have been disillusioned with America and I think we are in danger of losing our democracy. But last night this old Senator’s faith was restored by the wonderful students we have coming up. We in Washington are leaving a bit of a mess behind us with the deficit and all the problems, but for the first time in months I have seen a bright future for our democracy.

Pressler is not alone in addressing his grievances with the current Republican Party. He mentioned Barry Goldwater a few times in his speech, one of the former senators he admired. Goldwater, known for his unsuccessful 1964 presidential bid, was upset with the religious right and voted for a several Democrats in his later years. It shocked people that the father of modern conservatism would be seen as an outcast today. “Barry Goldwater was a believer in the American system,” Pressler said in his speech.

Senator Pressler reinforced my belief that today’s Republican Party vastly differs from yesterday’s. The essential principles of conservatism – balancing budgets, shrinking government, and promoting fiscal responsibility and freedom – seem to have disappeared from the platform of the GOP. This experience is not only something I will remember as a funny coincidence, but as a sharing of lessons and memories with a relic of the golden age of conservatism.