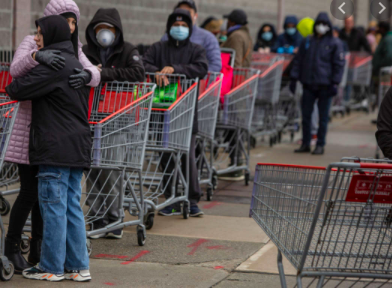 The United States has now outpaced China in total COVID-19 cases, reaching more than 100,000 infected individuals. With the stock market in free-fall and the death-toll climbing, it’s more evident than ever that drastic measures will need to be taken to mitigate the effects of this epidemic. Currently, the government’s philosophy for overcoming this crisis has become a utilitarian nightmare. While important improvements have been made in terms of public health, the White House has espoused a doctrine that values the stock market over the lives of Americans. This utilitarian calculus is morally egregious and utterly misguided; humans should not be reduced to numbers on a spreadsheet.

On March 23, Donald Trump retweeted Renee Williams, saying, “Flatten the curve, NOT the economy,” a sentiment echoed by many in the Republican establishment. Texas Lieutenant Governor Dan Patrick even claimed on Tucker Carlson’s show that many elderly Americans would be willing to die to save the economy. It appears that there are individuals in power who would be willing to sacrifice lives for the sake of the stock market, arguing that it would be for the greater good. Those who espouse these philosophical reasons say that a collapsing economy would cause more harm than the coronavirus. Louisiana Senator John Kennedy used this logic when he said, “Look … it’s true: The coronavirus can kill you. … But you know what else can kill you? Poverty. Hunger.”

To some extent, I can understand why people cling to this argument. Supporting the economy seems like the lesser of two evils, but it incorrectly assumes that there are no alternatives. The situation is framed as if the only option is to sacrifice an inordinate amount of human lives, but it’s possible to overcome this crisis in a more humane and just manner. During the initial outbreak of the coronavirus, Asian countries became the most vulnerable as a result of their proximity to China. However, as the pandemic has progressed, the number of new domestic cases in many Asian countries has declined significantly. The primary reason for this was their early response and extensive testing methods, the best example being South Korea’s drive-thru testing centers. While it is too late for an early response in the United States, more money should be allocated for identifying infected individuals. Although the logistics for additional testing would be much more difficult in a large country like the U.S., the responsibility could be delegated to the states to make the task more manageable. Being able to identify infected individuals in a timely fashion is essential to the containment of the virus. While the economies of countries like South Korea have been disrupted by the coronavirus response, they will recover in the long-term.

The tendency of American capitalism is to reduce individuals to numbers on a spreadsheet; a person’s worth is based on their ability to generate capital. While this can be excellent for creating economic growth, it can skew the way we view the value of life. People would be willing to sacrifice the lives of a few to save the economy because it seems like the “rational” thing to do. With the ‘Let a few die to save the many’ mindset, the pandemic becomes a sort of nation-wide trolley problem. But it doesn’t have to be this way. We could instead suspend all non-essential occupations and begin rationing resources. We could even institute a temporary universal basic income until the pandemic subsides. It’ll be expensive and logistically complicated, but, in the long term, it’s better for humanity. Now, more than ever, it is important to remember the sanctity of human life.