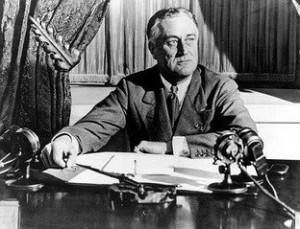 President Barack Obama is an historic president by default. Being the first biracial “Leader of the Free World” and being elected in a time of economic strife will cement Obama’s place in the history books. In fact, the diversity and grassroots dedication demonstrated by his electoral coalition, the reaction to his victory by a myriad of political groups, and the subsequent birth of the Tea Party movement will likely fill a chapter or two in future American History textbooks regardless of his actions in office. Furthermore, key moments like the passage of health insurance regulation, the repeal of “Don’t Ask, Don’t Tell,” and the assassination of Osama Bin Laden will most likely secure his Presidency as at least neutral rather than a failure.

However, being in the history books does not mean he will be an historic (great) President. America needs a President of historical caliber to overcome its social divisions, halt its economic deterioration, and to save the drowning middle class. To discover a pathway for him to be the President that America requires, one has to compare him to other historical oval office occupants. To narrow the field of vision, one can limit the comparison to other champions of progressive ideas and in the spirit of Obama’s post-partisanship, let’s draw from both parties.

The Roosevelts have been consistently considered among the greatest of American Presidents. Theodore Roosevelt (TR) was a Republican and became a progressive champion once freed from walking the tight rope of party politics. Teddy’s distant cousin Franklin Delano Roosevelt (FDR) was a Democrat and rode into office on the progressive steamroller that was the New Deal Coalition.

However, the Roosevelts’ and Obama’s styles of leadership have been nothing short of antithetical and there is where President Obama can learn the most. Certainly the basic tenets of progressivism, such as business regulations, a paternalistic government, and the empowerment of labor, that proved so popular under the Roosevelts and have the public support today can be championed, but that it not news. The missing percentage points of support between Obama and his historical counterparts is a matter of approach. President Obama faces a divided Congress and a difficult media, which were not systemic issues for these previous progressive administrations. However, the basic strategies of the Roosevelts could prove essential to overcoming these roadblocks and as such these strategies could be prerequisites for the future status of the United States.

Progressive politics are popular politics. Both FDR’s and TR’s programs were backed by tremendous public support, including bipartisan support. Despite the veracity of conservative media outlets and conservative politicians, when it comes down to specific issues, modern Americans support progressive policies although they do not always identify themselves as progressives or liberals. Poll results concerning recent progressive proposals indicate this. According to the Washington Post-ABC News Poll, 52%-62% of Americans supported the “public option” of federally administrated health insurance to compete with private insurance companies. Reuters found that 60% of Americans wanted this policy. The CBS News/New York Times Poll found that 72% of Americans supported a “government sponsored health care plan to compete with private insurers.”

For a more recent example, we can look at the “Buffett Rule” to increase the richest taxpayer’s tax rates to at least those of the middle class. A poll by the Daily Kos that found 73% of Americans supports this tax reformation. This parallels another extraordinary majority indicated in a Gallup poll that showed 70% supporting closing corporate tax loopholes and 66% favoring increasing income taxes on individuals earning more than $200,000 and families earning more than $250,000. In fact, Americans on the whole are committed to the continuance of entitlement programs and would generally prefer to increase taxes rather than decrease services according to a USA Today/Gallup Poll.

However, this approval of progressive ideas has not translated to approval of Obama’s administration. To demonstrate the distance between public opinion on progressive policy and public opinion on this “progressive” President, one can look back to the poll data on the Public Option. While the Washington Post found that as high as 62% of Americans supported the Public Option, only 48% supported his handling of Healthcare. This gap widened concerning deficit reduction and the Buffett Rule. While two thirds of the country supports increasing taxes on corporation by closing loopholes and increasing the income taxes on the upper middle class and rich, Americans still only approve of Obama’s handling of the Economy and the Federal Budget Deficit at rates of 38% and 31%, respectively, according to Gallup polls over the summer. In both cases, the particular ideas were supported while the President associated with and actively advancing those ideas was not.

What could be the source of this division? It would seem logical that supporting a policy maker follows from supporting his policy program. However, this does not follow with the Obama administration. Let us first recognize that general polling question for approval ratings is worded, “Do you approve or disapprove of how Barack Obama is handling X” with X being any particular issue or policy area. Or, the question asked is whether the participant approves of the President’s “performance” on a particular issue or policy area. It is less a substantive question and more a qualitative question. The questions essentially ask for the respondent’s opinion of the President’s effectiveness rather than of presidential policy or policy advocacy.

It can be argued that the Roosevelts were popular because they were quintessential examples of the strong executive. Teddy Roosevelt was known for calling Special Sessions of Congress to get his policies enacted. The famous First Hundred Days of FDR’s administration were based on a 100 day Special Session of Congress. Both Presidents were known for their strong-arming of the legislative branch. There is even a story of Theodore Roosevelt inviting into the Oval Office two Senators leading the opposition to his selection of Panama as the location of the canal to bisect Central American and join the Atlantic and Pacific Oceans. TR proceeded to let them present their argument while seemingly taking notes and appearing genuinely moved, however, he simply scribbled his children’s names during their entire meeting. This kind of misdirection allowed the opposition to relax only to be overcome by a Roosevelt directed blitz in the Senate.

In contrast, Obama has stepped back and permitted the government to be led by Congress. Although this might be an insight into his views on constitutional construction, he and the nation suffer for it. The Congress is an inherently divided body where debates are designed to be robust and legislation designed to be deliberative. However, this body is not structurally designed to lead, rather the Presidency was created by the Constitutional Convention to provide leadership to direct Congress, which had been unable to direct itself effectively under the Articles of Confederation.

The Presidency under the Roosevelts also held a position of strength with the media. By promoting intimacy between themselves and reporters and occasionally utilizing misdirection, these Presidents controlled the image of themselves and orchestrated favorable conditions for their policies. Within his first few days of holding the office after the assassination of President McKinley, Theodore Roosevelt called in the publisher of the Times-Herald and leaked the information that he would be retaining the services of two cabinet members who had been thinking of resigning. First, Roosevelt orchestrated the conversation so that the publisher thought he had convinced the President to keep them on board and secondly, he made sure this information got published before the secretaries could resign ensuring that they would remain at least in the short term. This stabilized TR’s early months in office and created a media ally. Also, it is well known that Franklin D. Roosevelt would meet with reporters in his wheelchair, and by inviting them into this circle of intimacy, FDR elicited the promise that no images depicting his handicap would be published. Furthermore, these Presidents, by keeping much information within a tight group of confidants (both maintained unofficial intelligence circles throughout the Western World), were able to control the flow of information more personally as they were often the only available source. As such, gaining access carried the prerequisite promise of favorable depiction by the journalist whose promise was reinforced by the fact that previously established intimacy with the President already called for such favoritism. Finally, when it became technologically possible, FDR bypassed the gatekeepers of the press and spoke directly to the public with his fireside chats. With reassurances and policy advocacy, he convinced a public wary of both socialism and destitution that his programs were necessary, morally sound, and firmly pragmatic.

Again, President Obama is the antithesis. Certainly, the structure of media relations has changed; however, the general rules have not. The tools available to Barack Obama are not manifested in the intimacy of a circle of reporters as the industry no longer functions in this way, rather he has the modern incarnation of the fireside chat to utilize. Only for two reasons will primetime shows be interrupted and only for one reason that 24 Hour News Channels will let someone else talk. Besides disasters and catastrophes of the highest degree, only Presidential Press Conferences, especially the impromptu ones, will make NBC, ABC, CBS, and FOX interrupt their most profitable shows because Press Conferences are inherently dramatic and produce high viewership. Further, Press Conferences give the President a voice on CNN, MSNBC, and FOX News that is not filtered through spinsters and political commentators. While, Obama cannot effectively control the actions of journalists, he can go over their heads and reach national audiences instantaneously and directly. This provides him the opportunity to engender himself to the American public, dispose of flawed opposition arguments, and overcome the legitimate opposition arguments.

However, Obama has not placed himself in this position often enough. He has not taken the opportunity to counteract the (mis)characterization of himself and his policies by his opponents. Obama’s best public quality is his speaking and he must not fail to utilize it. This runs in concert with returning to the strong Presidential relationship with Congress. By tapping directing into public opinion and connecting directly with the Senators’ and Representatives’ constituencies, he can undercut them and produce the results he seeks. President Obama must learn from Theodore and Franklin Roosevelt that the mark of an historic and effective Presidency is to embrace the role of commander-in-chief, especially in terms of the relationship with the media and Congress. With these models guiding his actions, he will be on the right path to a historic presidency and American will have a better chance of being on the right path into the future.

Dylan is a Junior at Fordham College Rose Hill and can be reached at dylan.young1991@gmail.com