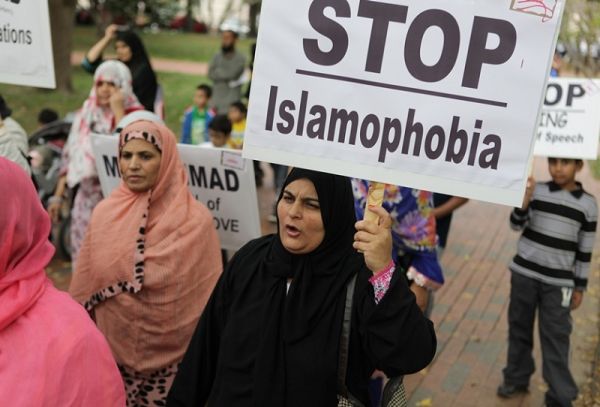 In his 1933 inauguration address, President Franklin D. Roosevelt set the foundation for American resiliency when he said: “The only thing we have to fear is fear itself – nameless, unreasoning, unjustified terror which paralyzes needed efforts to convert retreat into advance.” Admittedly, the 1930s were an era of heightened racial tensions, racial targeting, and severe violence, and in the time between FDR and Barack Obama’s current terms, our nation has taken great strides in securing internal inclusiveness and justice through the promotion of civil rights and American freedoms.

Yet, as we continue to move forward in the defense of these rights, we find ourselves at the verge of retreat, allowing our nation to fall back in unreasoning fear and to give in to a very real threat: Islamophobia.

Islamophobia describes a politicized prejudice against all Muslims and is marked by discrimination, propagated by hostility, and fueled by strong anti-Islamic sentiments. Since its intensification after 9/11, it has become a nightmare for democracy, a threat for peace, and a combatant against the most basic American values.

The post 9/11 period and the international terror spurred by al-Qaeda resulted in historically high records of discrimination against Muslims in the United States. In 2001 alone, hate crimes against American Arabs and Muslims increased by 1,700 percent, amounting to a staggering 481 crimes according to data collected by the FBI. In 2010, nine years after the attacks, nearly half of Muslim Americans reported experiencing racial or religious discrimination, a sentiment that led every other religion by a significant margin.

Fifteen years later, Muslims worldwide are experiencing, more than ever, discrimination and prejudice. The ISIS inspired attacks on both Paris and Brussels on Nov. 13, 2015 and March 22 of this year have shaken the world and endangered the course of our nation’s political discourse. Xenophobia, racism, and bigotry are increasingly present in the words of some of our politicians who call for ridiculous policies that stand against American values and inflict harm upon the lives of a large community of Americans.

It is in these words of intolerance that we can find a common trend: fear. Fear that is politicized by some of our political leaders in an effort to harness power, proving, in this way, that perhaps FDR was wrong: Our greatest threat may not be fear, but rather those who use it as a tool for political power.

Phrases calling for the surveillance and patrolling of Muslim Americans, banning Muslims from entering the U.S. and even condemning Islam as a religion that “hates us [Americans]” have been thrown around during this election season. What is perhaps most troubling about the disheartening rhetoric that presidential candidates like Donald Trump and Ted Cruz have been propagating is that their inflammatory words do not just target radical terrorism. Rather, they purposefully inflict upon the rights of all American Muslims, most of which, like any other religious group in America, are peaceful and law-abiding citizens.

What do freedom and justice mean if they are limited to the few? Jewish, Christian, Muslim, Buddhist, Hindu, Sikh – we are all America. Furthermore, we are all human. By permitting ourselves to become influenced by political ideologies that are driven by fear and fueled by greed, our culture of democracy becomes endangered. By allowing such a fundamentally constitutional right such as the freedom of religion to become threatened, we create an America that is overtly hypocritical. Or have we forgotten the religious oppression that drove English settlers onto American shores in search for a land in which they could prosper and freely practice their religion?

When ISIS struck in November, the world mourned as one, and when we demonstrated solidarity, we were all Paris. When ISIS struck once more on March 22, we were Brussels, too. But when were we Iraq when a suicide bomber killed 29 people and wounded 60 at a friendly soccer match? When were we Ankara when a twin suicide attack took the lives of 103 civilians during a peace rally last October? And what about Afghanistan, Libya and Syria? When did Western nations come together in solidarity for Yemen, Tunisia, Turkey, Egypt, or Bangladesh?

In approaching the fight against ISIS, and disproportionately publicizing Western attacks, it seems as though we have forgotten that it is Muslims, particularly Sunni Muslims, who are, by far, the largest victims of ISIS’s terrorism.

In 2011, the U.S. National Counterterrorism Center reported, “In cases where the religious affiliation of terrorism could be reported, Muslims suffered between 82 and 97 percent of terrorism-related fatalities over the past five years.” Just to give an idea of the magnitude of the loss of Muslim lives, a UN study released early in 2016 reveals that between January 2014 and October 2015, nearly 19,000 civilians had been killed in Iraq, mainly as a result of ISIS-inflicted terrorism. Muslims are not only the largest victims of terrorism-related fatalities, but they are also the most interested in seeing the end of the brutal and deadly dictatorship imposed by ISIS.

In targeting, oppressing and alienating our fellow Muslim American neighbors through dangerous language and calls for anti-American measures, some might say we are facing a virtually unrecognizable America. I beg to differ. Islamophobia is not an isolated incident, but rather an example of history seemingly repeating itself. Perhaps American hostility against Muslims isn’t in fact as anti-American as we would like to believe it is.

For centuries, America has stood as a beacon for hope, hailing itself as the greatest nation in the world – a true democracy founded upon principles of equality unlike any other nation to have existed before it. But in looking back into the shadows of our nation’s history, it is difficult to ignore the hypocrisy engrained into a culture that has allowed racism, prejudice, intolerance and violence for centuries. Our nation has waved its flag proudly through the massacre and brutalized relocation of Native Americans, the enslavement of and violence against African Americans, the discrimination against German Americans during WWI and the persecution of Japanese Americans during WWII. And in face of the growing hostility that the Muslim American community is experiencing, even those who are descendants of some of the most oppressed groups in American history turn a blind eye as this vicious cycle of unjustifiable discrimination begins once more. When will we learn to correct our mistakes?

It is undeniable that ISIS is of great threat to the safety and wellbeing of millions of members of the international community, particularly those in regions, like Syria, that have been under constant violence. It is also essential that we secure our nations by creating smart and effective policies to deflect violence.

But it is a narrow-minded, discriminatory, and counterproductive practice to point to all Muslims for the violence led by the extreme, radical few. In doing this, we are not only alienating peaceful and law-abiding citizens but, by separating, dividing, and “othering,” an entire population, we are creating the foundation for radicalization. A 2013 Duke study found that, in fact, Muslim Americans caught more terrorism suspects and perpetrators than the United States government itself. American Muslims are with us in the fight against radical terrorism, and if we continue to alienate the Muslim community, we are hurting our chances of creating a strong, united national front against ISIS.

In moving forward as an international community, it is critical that we stop framing the war against ISIS as a fight between the West and Islam. It is no such thing, nor should it be. It is an international call against brutal, radical and violent terrorism, a call for peace led by people of all faiths, races, and nationalities. Until our politicians frame it as such, we will continue to threaten the very principles that define us as a free nation. As national elections near, we must remember what it is that makes us a democracy. We are at the forefront of a historical era in the United States of America – let us make it one that does not create irreversible damage.