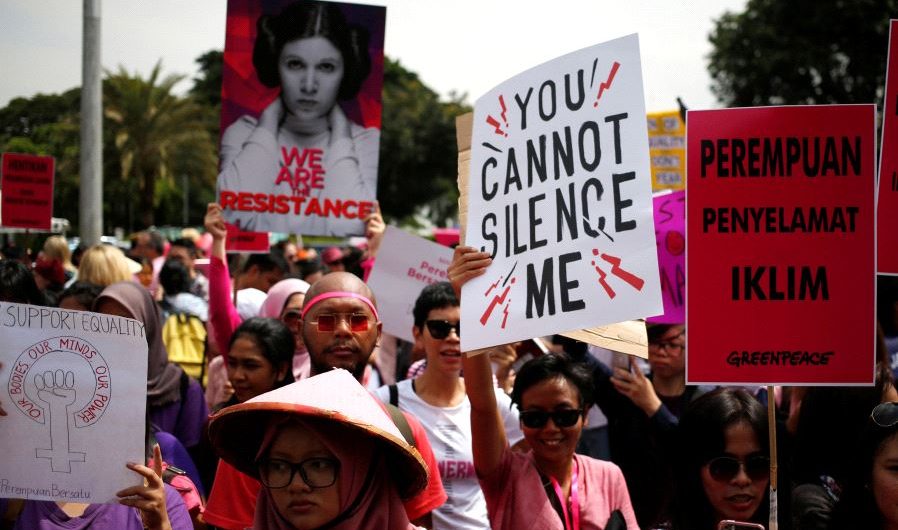 If you have a smartphone, laptop, television, or just a set of eyes and ears, then you haven’t been able to escape the dazzling onslaught of sex abuse scandals within the last few months. Dozens of women have come forward to confess that they have been preyed on by powerful and prominent men like Hollywood producer Harvey Weinstein, comedian Louis C.K., and politician Roy Moore, thus breaking the silence that usually protects men in these positions from facing consequences. Tens of thousands of women have been using the #MeToo movement on social media to free themselves from the silence surrounding this once-taboo topic and give others a sense of the pervasiveness of sexual harassment and assault.[1] In keeping with its ability to balance humor and serious politics, SNL just aired a spoof music video titled “Welcome to Hell,” in which its female cast invites their male audience to reflect on the barrage of sexual misconduct issues that women constantly deal with and that have only recently been made visible in the public eye.[2]

These frank objections to the status quo of misogyny have arisen with more poignancy and intensity than usual in the past year, partly due to the outcry that followed President Trump’s political victory. However, while many American women are justifiably discouraged about the current state of gender equality, there is nowhere in the world in which women’s rights have higher stakes than in developing nations. In over 150 countries, negative or apathetic attitudes regarding women’s rights have fatal consequences, and the current political climate in the U.S. puts the organizations supporting these women in serious danger.

One of the most important agencies that supports women worldwide is the United Nations Population Fund (UNFPA), a subsidiary organ of the United Nations General Assembly. The stated mission of UNFPA is “to deliver a world where every pregnancy is wanted, every childbirth is safe and every young person’s potential is fulfilled.”[3] The organization believes that population trends are of utmost importance because they have the potential to influence so many aspects of social and economic development. Its concern for population and development means that most of its efforts are geared towards women and their reproductive health. Furthermore, “because reproductive health problems are borne disproportionately by women, it is also an issue of gender, inequality and human rights.”4 UNFPA firmly believes that women have the right to responsibly choose the number and spacing of their children.

In order to accomplish its humanitarian goals, UNFPA helps provide modern contraceptives to young women who want to avoid or delay pregnancy, trains local medical staff in safe child delivery techniques, and supports prevention of gender-based violence, child marriage, and female genital mutilation. Its efforts help millions of young women and girls who do not have support systems or adequate access to sexual health resources. Without the help of UNFPA, many of these women would at best become mothers before they are ready, and at worst would needlessly fall victim to disability or disease or die by preventable complications.

However, President Trump could not make it clearer that he does not care about such essential women’s health and equality issues. In April, the State Department announced that the U.S. would cut funding and cease to contribute to the life-saving UNFPA organization. Its reasoning relied on the so-called “Mexico City Policy” that Trump reinstated in January, which mandates that in order to receive U.S. funds, non-governmental organizations must agree that they will not “perform or actively promote abortion as a method of family planning.”[4] In practice, this means that the NGO must not provide any advice or information about abortion as an option to pregnant women, even in countries where it is legal. According to this policy, all information regarding abortion must be restricted, except in cases where the pregnancy is a result of rape or incest, if it poses a health risk, or if the woman has already reached the clear decision to legally pursue an abortion. This policy has long been a source of contention between Democrats and Republicans- it has consistently been reinstated and rescinded since 1973 depending on which party sits in the White House.

However, the recourse to the Mexico City Policy is completely inappropriate and erroneous in application to UNFPA. The statement made by the State Department claimed that UNFPA “supports, or participates in the management of, a program of coercive abortion or involuntary sterilization.”[5] In actuality, such a policy is completely antithetical to UNFPA’s mission statement and goals. The agency dedicates itself to empowering young people so that they can make their own informed decisions. UNFPA does not fund or perform abortions, and it explicitly opposes coerced abortions. For humanitarian reasons, it also discourages unsafe abortions, does not interfere with the state of the legality of abortion in other nations, and focuses on preventative family planning measures.

The only breach UNFPA could possibly be guilty of is providing information regarding abortion. If it has done so, it would technically be in violation of the Mexico City Policy, but it’s not in violation of human decency and common sense. Withholding information regarding abortion in a country in which it is legal is completely disingenuous. It is also an overstep of American power. For the U.S. to threaten and follow through on withholding funds from an organization that might provide legal and medically appropriate information in order to push its own moralizing agenda is egregious and inappropriate.

There will be far-reaching negative consequences for women worldwide as a result of the ill-thought-out decision to reinstate the Mexico City Policy and cut funding to UNFPA. The U.S. has been one of the top donors for UNFPA in recent years, and its assistance has had a huge positive impact: “From 2014 to 2016 U.S. support allowed UNFPA to provide lifesaving assistance to an estimated 10.5 million people in humanitarian circumstances,” including the prevention of 10,000 maternal deaths and 100,000 unsafe abortions.[6] As a statement made by a sister organization aptly put it, “The fact is: cutting funding to UNFPA will cut women’s lives short.”7 In this case, a principled stance taken by the White House against abortion will mean the withdrawal of support for dozens of necessary and beneficial health services, and will directly result in more deaths and dangerous abortions in developing nations. Cutting funding to UNFPA is directly in violation of the “family values” that the Republican Party claims to protect, and it is despicable that a humanitarian issue has been so transparently politicized. This is not a matter of back-and-forth between the pro-life and the pro-choice camps, it’s a matter of human rights.

While American women are righteously concerned with issues of equality within the U.S., and the recent movements to raise awareness of such issues are laudable, they also need to turn their focus to women in the developing world. Attending to women’s rights is more important than ever now that the White House is pushing its own agenda worldwide by denying much-needed assistance to women all over the globe. American women and the men who support them need to speak out and form a protest movement regarding the callous treatment of women in developing nations at the hands of the White House. Perhaps this will have the doubly positive effect of enacting change in those countries and convincing more people that women’s issues are not just a matter of complaining or taking offense; they are a matter of life and death.