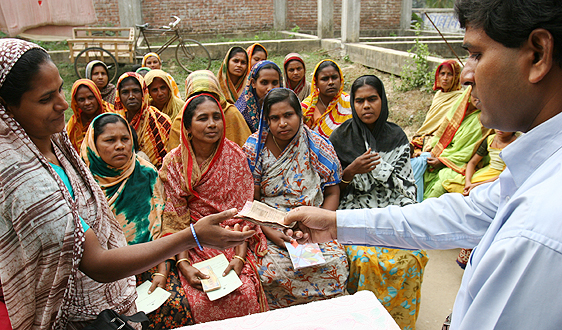 Microfinance has both a dubious and triumphant track record as an agent of poverty alleviation. The movement remains rooted in the fundamental premise that people can increase their income if given loans to help build their small businesses. Long overshadowed by what poverty researcher Malcolm Harper described as “generally unsuccessful government-sponsored poverty alleviation programs,” microfinance has made notable strides in positioning itself as a credible tool in poverty reduction. In addition, by marrying loans with community and social development initiatives, microfinance has initiated a profound restructuring of the social dynamics that have long marginalized women in the poor, rural marketplace, giving them both the financial wherewithal and social impetus to succeed on their own terms.
A nascent movement with a one-dimensional solution to poverty, microfinance has often been unable to translate a sustainable and consistent formula for success across a multitude of competing political, social and economic constructs. As microfinance continues to be evaluated along multiple, disparate metrics, it is important to view each case study within the context of the underlying motives of the provider or lender and the country in which it seeks to operate.
In Bangladesh, the Bangladesh Rural Advancement Committee and The Grameen Bank have succeeded in combining community development with micro credit. In serving as the birthplace of the microfinance movement, they are particularly useful counterexamples to other, floundering microfinance operations. The Bangladeshi microfinance movement is rooted in three core principles: (1.) The provision of loans to community groups of micro enterprises, (2.) a community-based incentive for loan repayment and (3.) business development and education programs that augment the loans.
There is evidence to suggest that short term loans and expectations of rigid repayment schedules are incompatible with the long term goals of building sustainable rural financial networks. The average loan size is $60, with an 86 day maturity. Although practical in theory, short term micro loans appear less effective in significantly altering the poor’s deleterious patterns of consumption. Orthodox micro credit theory posits that loans are to be issued without any development or community-building assistance, based on an abiding faith in the poor’s ability to transform credit services into long term, sustainable capital growth. Yet it may be that the terms of the microfinance loans are too short, as suggested by experiences in countries like Bangladesh and Pakistan.
In Bangladesh, loan groups are a critical component to the successful delivery and recovery of funds. Microfinance institutions do not require traditional collateral for loans. Rather, loan groups provide a social guarantee, through ethical and “peer pressure principles or joint liability.” This practice fosters a collective interest in the local business community, healthy competition and growth. There is evidence, most particularly in Bangladesh, that the poor have a tremendous capacity and willingness to save, possessing a keen capacity for enterprise development and building a sustainable profit structure, if given the right incentive and security with which they can use their loans.
Consider a particular scenario proposed by poverty researcher Hans Rosling. A woman in Bangladesh wants a motorized mill to replace her hand-operated mortar to process her grain. A “joint-liability” microloan from the Grameen Bank gives her the necessary funds to replace her hand mill. In addition, she is able to buy a bicycle so that she can travel along the paved road, (which was also paid for by loans), to deliver her goods to market, which she has produced at a faster, more efficient rate. With better information on how much yield to sell, she is able to determine a competitive price. She will then have an incentive to repay her loan on time in order to maintain the “good faith” of her fellow village borrowers, and eventually gain access to greater loans and lower interest rates.
The Grameen Bank in Bangladesh may be the best example of how a sustainable and effective decentralized structure of competent, dedicated lenders having a positive social impact in the country’s most impoverished regions. Grameen was founded on the ethos that with the support of a community and the provision of microloans, the poor can find the spark of entrepreneurial initiative. The Grameen Bank model shows how loans to farmers to buy equipment for agricultural production that bolster other skill sets are self-reinforcing. In joining a community cooperative of other farmers, a farmer is able to take a share of a larger loan and invest in his productive capacity. Soon, through his loan cooperative, he is able to buy a device in which he can track global prices for his crops, gauge his monthly yields, and thus determine the proper amount of goods to bring to market. He becomes a more competitive player in the global marketplace and his hopes for future prosperity are increased. His future welfare becomes intertwined with other farmers, spurring healthy competition and removing him from his bygone role as an isolated entity in weak, rural commodity markets.
The Bangladesh case study reflects the merits of microfinance in both a social and economic context. The success of community banking is seen in the experiences of the Grameen Bank, in which a borrower joins a group of other borrowers who “cross-guarantee” each other’s loans. Thus, the microfinance movement in Bangladesh has helped to instill a “culture of credit discipline.” Small loans range from $50-100 with 4-6 month terms, supported by disciplined loan amortization, building an incentive for long term, lower interest rate loans in the future.
Microfinance was initially founded on the premise that the poor cannot modernize without capital from stable financial institutions that are connected to global capital markets. Yet, it is difficult to reconcile the regional banks’ fear of lending to the destitute, who have no collateral to support the loan, with the fundamental assertion that with access to capital, the poor have the necessary skills and incentives to put their loans to productive use.

1,547 thoughts on “Microfinance in Bangladesh”