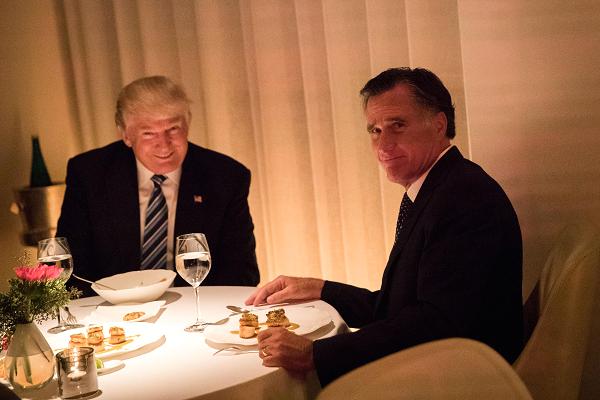 With the retirement of Orrin Hatch, much attention has become devoted to the prospect of the return of the White Horse himself, Mitt Romney. He’s changed his twitter location to Utah and he’s scaring the president. Surely the #Resistance would get another person in Washington ready to stand up to the president. Romney’s election would likely be one of the biggest political comebacks since fellow two-time loser Richard Nixon struck back in 1968 by taking the White House – and it’ll have only taken Willard Mitt 24 years to become a senator. Alas, whereas the NeverTrump[1] crowd might enjoy Senator Romney, odds are he will disappoint the #Resistance[2].
NeverTrumpers have hplenty to like from Mitt Romney thus far. It is likely that a Senator Romney would be critical of the President’s National-Populist excesses. Romney’s been a major critic of the President’s tone since the primary campaign, beginning with his philippic speech against then-candidate. Following the president’s disgraceful commentary regarding the marchers at Charlottesville this past Summer, Romney vocally put all of the blame on the racists for the murder of a woman protester and called out the president’s moral failure. Whereas President Trump endorsed Roy Moore, Mitt Romney went so far as to say that no Senate Majority would be worth the loss of integrity that a Moore victory would bring. Whatever one’s thoughts of Mitt Romney in 2012, given where the President has dragged the Overton window, his presence would surely be a return to fresh air.

However, folks looking for another vote to stop the President’s agenda will be disappointed. Why should Senator Romney be any different from Senators Flake and Corker? Both have picked some very vocal fights with the President and Jeff Flake went so far as to support Democrat Doug Jones in Alabama. Yet both voted for the Affordable Care Act repeals and for the Republican Tax Reform plan that Progressives absolutely loathed.

Romney would also be a boon for Republicans in a number of important races. Two of the Republican Party’s most vulnerable Senate seats come 2018 are in western states where President Trump significantly underperformed in 2016 relative to Governor Romney: Nevada and Arizona. Both states have sizable Mormon communities that are not very excited by President Trump (coincidentally, both Senators Dean Heller and Jeff Flake are Mormon).

NeverTrumpers are going to get the best of both worlds. A fairly typical conservative who will be willing to support the Republican agenda while also being willing to call out President Trump. Romney would be an internal center of GOP gravity separate from Trump come 2018. He’d be a national name who would be able to campaign for Senate and House Republicans without the baggage of president Trump (this is very important for the GOP as they have to worry about suburban Romney-Clinton voters come 2018). Should Romney help protect Republican house and Senate seats, the Senators and congressmen who hold them will be indebted to Mitt Romney, giving Romney heavy influence over two GOP votes on top of his own in a fairly-tight body and influence over a number of house votes.

Unfortunately for the #Resistance, the aforementioned success Romney would bring to House and Senate races would by default come at the expense of Democrats, who would be more inclined towards taking a more aggressive stand against the president.

Most damning of all, however, is that Mitt Romney is the Republican who first tacked right on immigration – and opportunistically so. In an effort to outfox and out-right John McCain and Rudy Giuliani, Romney took charge on the issue of illegal immigration in In 2008, Romney asked Sheriff Joe Arpaio to be the honorary chair of his Arizona campaign. In 2012, Arpaio continued to support Romney.

Mitt Romney attacked Rudy Giuliani on New York being a sanctuary city in the 2008 Republican primary and in the 2012 Republican primary hammered Rick Perry for making Texas a “magnet for illegal immigration” due to tuition policies that undocumented young people could utilize. Romney out-righted Newt Gingrich by calling for policies that’d make life for undocumented residents so irksome that they would “self-deport”. All of this was despite Romney supporting the same comprehensive immigration reform proposals that John McCain and then-President Bush supported in the 2005-2006 period.

Romney may be attacking Trump now, but Romney was so tough on immigration that Donald Trump at the time said that “He had a crazy policy of self-deportation which was maniacal….It sounded as bad as it was, and he lost all of the Latino vote….He lost the Asian vote. He lost everybody who is inspired to come into this country.” They are in many ways two opportunistic peas in a pod, and Romney’s willingness to go as far as he needs to win as made even more evident by how he sucked up to Donald Trump in 2012 – helping to legitimize the idea of Trump as a political actor.

Should Mitt Romney be elected this October, it will be a good thing that there may be a Republican in the Senate willing to criticize President Trump once Senator Flake retires and a good thing that there will be a Senator willing to call out the most heinous examples of far-right madness as seen in Charlottesville and Alabama. If you’re a NeverTrumper who is more irked by the President’s temperament and cultural mores than deeper policy, then you will be very happy. If you’re a member of the #Resistance looking to fight the broader Republican agenda, then aside from occasional Trump-critical tweets that you can share, you are going to be very disappointed.

[2] The #Resistance being a popular term