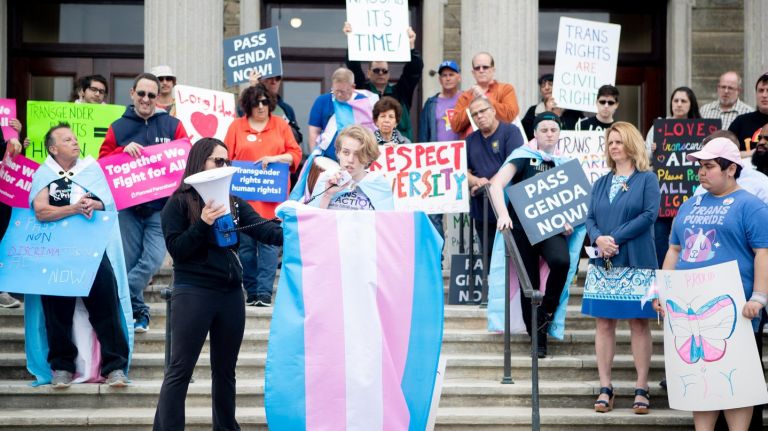 The LGBT community has made great strides in the past few years with the nationwide legalization of same-sex marriage, as well as the growing visibility and awareness of LGBT issues.  However, the community does still face discrimination and ignorance, and the latest example of this is the reckless fervor with which the Trump administration is attempting to roll back rights.  The Department of Health and Human Services is currently trying to establish an “explicit and uniform” definition of gender.  According to a memo obtained by the New York Times that has been circulating since last spring, the administration wants to redefine gender as either male or female in a determinate manner, “on a biological basis that is clear, grounded in science, objective, and administrable.”  This, of course, has sparked concern among members of the LGBT community and its allies, because it is a direct attack on the 1.4 million people in the United States who identify as transgender.

The Department of Health and Human Services stated reason for attempting to change the definition of sex and gender is their desire to have a clearer definition of gender under Title IX: the civil rights law that, among other things, prohibits discrimination on the basis of gender.  The department’s proposed definition of sex (and by extension, gender) and its corresponding rules against discrimination had actually been in use for quite some time, until the definition was expanded to include gender identity under the Obama administration.  Now, the newly released memo says that “the sex listed on a person’s birth certificate, as originally issued, shall constitute definitive proof of a person’s sex.”  The Trump administration is trying to return to a legalized binary in which one’s gender is inherently the same as their sex assigned at birth, in direct opposition to the very identities of transgender people.  The memo states, “sex means a person’s status as male or female based on immutable biological traits identifiable by or before birth,” which is not incorrect in and of itself.  However, sex is not the same as gender, according to the American Psychiatric Association.  The transgender identity often comes from the condition of experiencing gender dysphoria, a condition in which a patient experiences “significant distress” about their assigned sex.  The Diagnostic and Statistical Manual of Mental Disorders (DSM) outlines specific criteria for this diagnosis. For adults, it includes “a marked incongruence between one’s experienced/expressed gender and primary and/or secondary sex characteristics” and “a strong desire to be rid of one’s primary and/or secondary sex characteristics,” whereas in children, criteria include, “an insistence that one is the other gender,” “a strong dislike of one’s sexual anatomy,” and “a strong desire for the physical sex characteristics that match one’s experienced gender.”  Transgenderism is not itself a mental disorder.  However, those who are transgender are often so because they experience dysphoria, a DSM-certified condition that requires treatment.  The state of being transgender is an identity with real medical consequences, not a futile label that can simply be defined out of existence. The most direct effect of this definition being legalized would be the resurgence of what’s been called the “bathroom debate” – whether or not transgender people should be allowed to use the restroom of the gender they identify as (i.e. the correct restroom), or if they should be forced into the restroom of their sex assigned at birth.  This is another example of the many times where politicians are attempting to act in the place of trained and professional doctors.  The relationship between physician and patient should not be undermined by legislation that is passed simply because politicians do not agree.

Transgender rights have been in the spotlight more than ever in the past few years, thanks to trailblazers such as Caitlyn Jenner, Laverne Cox, and Nicole Maines.  Many states have even passed their own laws in order to protect trans individuals, including California, Hawaii, Iowa, Massachusetts, Nevada, Oregon, Washington, and Washington, D.C.  However, these advancements in human rights have not stopped counter-attacks from those uneducated about trans people and transgender rights.  In the recent midterm elections, Massachusetts voters decided to stand with transgender individuals by voting yes on ballot question three, a referendum on a current law that prohibits the “discrimination on the basis of gender identity in public accommodations.”  It is now clearer than ever that our current administration does not view transgender people as a group in need of protection or worthy of respect.  And it is up to us as voters and as allies to protect our brothers and sisters in the LGBT community.