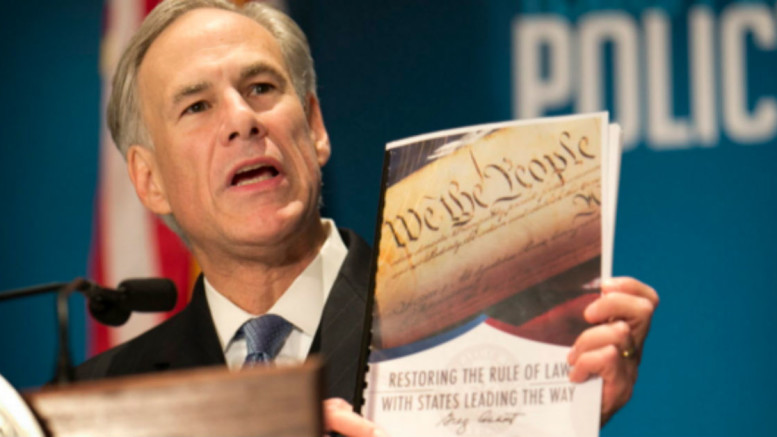 In the dawning of the new year, Texas Governor Greg Abbott issued a proposal dubbed the Abbott Plan or Texas Plan, calling for the assembly of a constitutional convention. In the 92-page document, amid a flurry of legal history and selected quotes from the Founders, nine core amendments were offered for consideration:

I. Prohibit Congress from regulating activity that occurs wholly within one State.

V. Allow a two-thirds majority of the States to override a U.S. Supreme Court decision.

VII. Restore the balance of power between the federal and state governments by limiting the former to the powers expressly delegated to it in the Constitution.

VIII. Give state officials the power to sue in federal court when federal officials overstep their bounds.

IX. Allow a two-thirds majority of the States to override a federal law or regulation.

The pundit class has jumped on the proposal, predictably splitting on the standard political fault lines that characterize the separate networks and syndicated columns. Rather than simply evaluate the merits of Gov. Abbott’s proposal, it is more instructive to present to the readership a post-conventional society, one where each of the nine amendments have been adopted. Effectively, Abbott’s proposal would mean the end of the federal government as we have come to know it, and a radical shift in the process of American rule of law.

By substance, items I and II would shift the preeminence of the national legislature, a founding principle of our nation. The power to legislate over state matters invades the purpose of having a national Congress. While requiring a balanced budget sounds responsible, doing so without drastic cutbacks on vital federal programs is unimaginable. When the federal funding for road and general infrastructure maintenance is cut in an equalizing effort, it may be useful to ponder how the Governor might ensure the stability his state’s highway networks.

Items III and IV target a revolt against executive enforcement. When these “unelected bureaucrats” write federal law through the promulgation of industry rule-making, recall that the authority to do so is legislated by Congress. The alternative (which, by extension, is presumably what the Governor advocates) would require Congress to supplant the executive agency by legislating for each the specific rules that govern enforcement. Beyond this, preemption is an established federal power. These reforms misplace justified frustration with a bureaucracy. Though necessary, this cumbersome step is an unrealized half-measure that has unforeseen consequences. Post-conventional society would be transformed, incorporating a micro-managing Congress; this, given the record of legislation passed during the most recent Congress, is a grim prospect.

Items V and VI are perhaps critical in the understanding of American judicial supremacy. The 2/3-override amendment would provide an extraordinary check on judicial review, which is enshrined in the constitution, and undermine the principle of judicial supremacy established in Marbury v. Madison. The super-majority rule simply qualifies the procedure of judicial review. Probably formed in response to Supreme Court decisions that have met resistance from social conservatives (Obergefell v. Hodges), the post-conventional society translates into one that is empowered to set a national social agenda by state governments, a social agenda that changes on the whims of the party that controls state legislatures (Republicans currently control legislatures in a majority of the states). At best, the post-conventional society will be swept up in the changing winds of prevailing social thought, making no mention of fiscal or defense issues; at worst, it will disrupt the already fractured tradition of legal precedent and continuity, compelling the law to kowtow to a transient political climate.

Having swept each branch clean with reform, the final three proposals seek to vaguely but forcefully tilt the state-federal relationship in favor of the former. These three amendments leave the broadest opportunity for uncertainty. They continue undermining the operating nature of a federalist government. They assume a Scalian reading of the Constitution, liberally utilizing textual ambiguity to inversely assume a strict constructionist interpretation that uses originalism as its legal aegis. The post-conventional society that adopts these amendments has one endgame: a radically changed dynamic of American federalism meant to emphasize the divergent interests of a string of state republics and play down a unified national government. This smacks, at least implicitly, of the proud separatist tradition of Texans, which the governor has played on electorally (though not officially endorsed).

This is the effect of the Abbott Plan. An Article V convention of this sort has not been seen since the Constitution’s original adoption. Its possibility, though unlikely given the precedent that all previous amendments have been passed through the Congress, remains alive. Yet, the value of Abbott’s plan is not in its actual feasibility; the plan’s true worth lies in formalizing the generic grievances that have leaked from the right since at least the 2000s. The largest political shift of the 21st century so far has been the growth of dissociative politics, where non-establishment attitudes and candidates have surged to political heft. Abbott’s plan crystalizes the broader reforms envisioned by the conservative wing of this phenomenon. Whether these aspirations are realized, Americans can only wait and see.