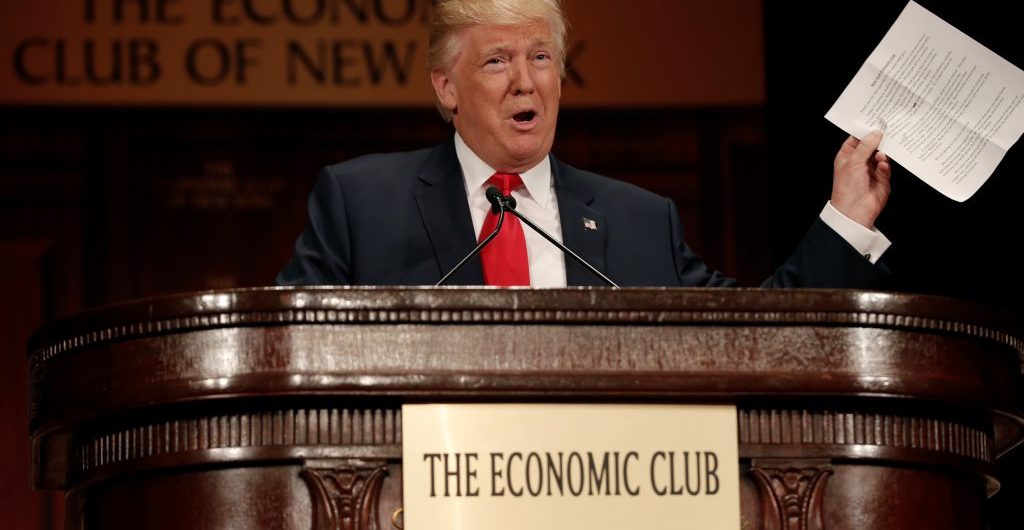 Newly-inaugurated President Donald Trump has a prime opportunity, with a Republican-controlled House and Senate, to be an advocate for the significant economic reforms that our country desperately needs. Since the Great Recession, the economy has been limping along, exhibiting anemic growth that is both shameful yet unsurprising. In fact, president Barack Obama is the first president without a single year of 3% GDP growth during his administration. Continuing the overall trend of an ever-increasing presence of the federal government meddling in our economy whether it be through regulations, mandates, price controls, or taxation, the Obama Administration placed even more restrictions in the wake of the 2008 financial crisis. Can we, in all honesty, be surprised at our economy’s poor performance when it is continuously weighed down and burdened by excessive regulation and mandates?

We have drifted a long way away from the classical free market capitalism that made us the economic powerhouse of the world. Trump, along with Congress, should make restoring the spirit of free market capitalism a top priority by simplifying our federal income tax code, reducing business regulations, and drastically cutting back on government entitlements.

By lowering the corporate tax rate, investment in the United States would become much more attractive for businesses around the world. With more companies establishing themselves in the U.S., increasing the tax rate, the country will generate more tax revenue and will also benefit from having more companies operating domestically. It would promote job growth while simultaneously reducing incentives for businesses to store their money offshores to start with. Furthermore, lowering the rate to 15% will significantly help small business owners, for the money that will be saved could be reinvested in owners’ enterprises to generate more jobs and lower priced, higher quality products and services.

Trump should also focus on repealing as many excessive economic regulations as possible. The Federal Register, a compilation of all the current and proposed federal regulations, exceeds 80,000 pages. Since 2009, Obama’s Administration has issued more than 220 major regulations with costs to the economy totaling over $100 billion annually. Conservative estimates of the total cost to the economy from all current federal regulations hover around $2 trillion, exceeding the annual revenue from federal income taxes. If we want to allow our economy to re-establish its dominance on the global stage, we must reverse the policies that have been preventing it from flourishing.

Furthermore, tax code must be significantly simplified. Trump should do away with our progressive income tax model by eliminating the income tax altogether or switching to a flat tax like Senator Rand Paul, Ben Carson, and Ted Cruz had advocated for in their presidential campaigns. With a flat tax, all Americans, with the exception of low-income citizens, would pay the same rate. A flat tax would also mean eliminating almost all the deductions and loopholes that plague our current tax code, which allow it to be exploited for the benefit of the wealthy and well-connected. The tax deduction for charitable giving could still remain. Additionally, compliance costs for filing one’s taxes would be noticeably reduced. In 2016, it is estimated that Americans spent 8.9 billion hours, at the cost of roughly $409 billion to the economy, complying with the tax code.

It is crucial that we balance our budget to address the skyrocketing national debt, projected to surpass 100% by 2040. When a country has too much debt it can plunge into economic collapse, as is the case in Greece and Venezuela. Roughly half of our annual federal budget of about $3.7 trillion goes to Social Security, Medicare, Medicaid, the Children’s Health Insurance Program, and the Affordable Care Act. The United States is now about $20 trillion in debt, with the national debt nearly doubling during the Obama Administration.

Much like our overall national debt, Social Security will be insolvent within a few decades. There are many reasons why the program is failing; however, the primary reason is that the system takes in less money than it owes. One potential solution would be, in the long-run, to transition participation in Social Security from being a compulsory program to a voluntary system in which Americans may choose whether they want to pay to contribute. We must also index Social Security to the current life expectancy of individuals in the U.S, for the life expectancy age has risen significantly since Social Security became law, yet the age at which Americans start collecting payments hasn’t been adjusted for this change. Current spending rates on Social Security are unsustainable; without major spending reforms, the program will go bankrupt.

Medicaid should be transitioned to a private health insurance model where families would be empowered to use their own Medicaid dollars to participate in the private health insurance market. This shift would allow households to respond and adapt to each household’s unique circumstances rather than being subjected to the government’s “one size fits all” approach and the myriad of strings and conditions that citizens are subjected to. A similar approach would work well to reform Medicare, specifically with the Seniors’ Choice Act serving as a potential solution, focusing on means-testing, indexing the retirement age to life expectancy, enabling seniors to participate in the private market, and fighting against fraud and waste.

As for the Affordable Care Act, it must be repealed and replaced. In its place should be a model that maximizes the usage of the free market while minimizing government’s role as much as possible. A good starting point would be to eliminate employees’ reliance on health care coverage provided by employers. Individuals should be allowed to purchase their own health insurance plans freely, regardless of their occupation and employer.

We should reduce our dependence on using health insurance for every aspect of our care. Instead, we ought to relegalize “catastrophic health insurance plans.” These plans have inexpensive premiums and higher deductibles intended to cover major health issues such as cancer and extended hospitalization. Minor day-to-day expenses would be paid for out of pocket. By directly paying for routine health care services like doctor visits, the patient would be empowered and have more control over their healthcare. Rather than interacting with health-insurance companies, doctors could connect with patients directly and would have an incentive to be more transparent with their prices. This payment method should be complemented by the expansion of health savings accounts, the ability to purchase insurance across state lines, and allowing individuals and businesses to pool together for insurance.

If patients are treated as consumers and have knowledge of the costs of services, doctors will be forced into competition and will have to lower prices and offer higher quality goods, just as we see with every other free market. The cosmetic surgery market in the U.S. demonstrates this fact, as does the surge in the number of doctors who only accept cash payments. These physicians display all the included costs upfront and offer their services at a far superior quality and at drastically lower prices. For this model to work on a larger scale, however, many of the burdensome regulations on the healthcare market must be lifted, as they lead to increased costs for services, which are then passed on to the patients. This requirement extends to the FDA, with its overbearing approval process and monopoly on determining which drugs can be brought to market.

Trump has the opportunity to implement the necessary changes needed to get our economy growing again. In short, he should advocate for cutting taxes, reducing government spending, repealing as many burdensome regulations as possible, and decreasing the government’s involvement in the economy; however, he must do so in a matter that follows the Constitution. This means passing legislation through Congress and restricting the power of the Executive Branch, just as the Founding Fathers had intended. The precedent of expanding executive power, as happened under President George W. Bush and President Obama, is no excuse to violate the powers legally bestowed upon the presidency. One thing is certain, our policies have not been working, so why would we want to continue down this same path?