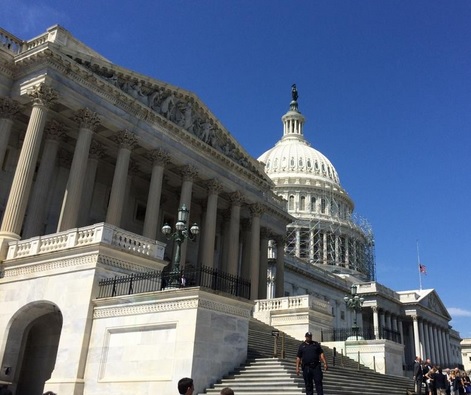 With the current situation in the Senate, the Republican Party would need a net gain of six seats in order to take back control from the Democrats. Of the ten closest elections listed below, Democrats hold eight of the seats and the Republicans hold two. Already, three races (West Virginia, Montana, and South Dakota) are solid Republican pick-ups from the Democrats. Senator Jay Rockefeller (D-WV) and Senator Tim Johnson (D-SD) have decided to retire from politics in these two red states. Former Senator Max Baucus (D-MT) was selected earlier in the year to be the next ambassador to China, leaving the state’s Lieutenant Governor, John Walsh, to hold the position. However, a scandal regarding plagiarism from Walsh’s earlier years was recently discovered, leading him to abandon his campaign. The outcome of these three races is close to certain, meaning the net gain needed for Republicans is now just three seats.

One of the takeaways from this midterm season is the fundraising advantage on the part of the Senate Democrats. From the following 10 closest races, the average amount raised by Democrats is $10.74 million compared to an average of $7.4 million for the Republicans, according to the Center for Responsive Politics. This discrepancy can likely be pointed to the fact that incumbents have a natural edge in terms of fundraising and of these ten there are six defending Democratic incumbents. PBS recently looked into the outside spending for these close races and Democrats hold a much smaller lead in fundraising. For these ten races, outside spending for the Democrats adds up to roughly $60 million and about $53 million for Republicans.

In terms of Obama’s final two years in office, one of the most important causes for concern regarding control of the Senate is the prospect of having to fill a Supreme Court vacancy. Justice Ruth Bader Ginsberg recently said, “If I resign any time this year, [President Obama] could not successfully appoint anyone I would like to see on the court.” If the Senate were to fall into the hands of the Republican Party, which many analysts are betting on, the likelihood that President Obama would be able to appoint a justice as progressive as Ginsberg drops dramatically. The resignation of Attorney General Eric Holder adds another wrench into the mix. The Administration can now hope to either clear a new Attorney General through the lame duck Congress or wait out until January to appoint someone new.

The Kansas Senate race is not listed below but should be on the radar of most analysts. The only two candidates on the ballot in November are current Republican incumbent, Pat Roberts, and Independent, Greg Orman. Initially the Democratic candidate, Chad Taylor, was slated to also appear on the ballot. However, when it was seen that the Democrats had a better chance at unseating Pat Roberts with the Independent, Taylor proceeded to remove himself from the race. The action brought about a decision by the Republican Secretary of State, Kris Kobach, to force Taylor to stay on the ballot. However, the Kansas Supreme Court ruled in mid-September that Taylor was allowed to remove himself. This opened the door to a race that slightly favors Independent Greg Orman. This could have serious implications for control of the Senate. If Sen. Roberts loses his reelection, the Republicans would need a net gain of seven seats to take over the Senate. It is unknown which party Orman would caucus with were he to win the election. Rumors swirled that Orman was going to meet with former Tea Party Senate candidate Milton Wolf, who was expected to offer Mr. Orman his endorsement in exchange for a public commitment to caucus with the Republican Party. Shortly after word broke of the meeting, it was quickly canceled.

Orman has stated that he would caucus with the majority party in the Senate. Nevertheless, were he to be the deciding factor as to which party holds that majority, it is more plausible that he will caucus with the Democrats. He has run as a Democrat for the position before and his positions on immigration and female reproductive rights tend to show him aligned with Democratic ideals.

The North Carolina Senate contest between Hagan and Tillis is becoming one of the nation’s most heated races as both camps throw a multitude of attack ads at each other. Both are using issues, from the Ebola outbreak to the ISIS threat, to win over the moderate voters in the state. Analysts look at the libertarian candidate, Sean Haugh, as a reason for Tillis’ falter. Haugh has been pulling in roughly 7% of voters, putting Hagan ahead. Along with Iowa and Colorado, North Carolina is seen as a necessary win for the Democrats in order to have any hope of holding onto the Senate.

The race in Arkansas between Mark Pryor and Tom Cotton is looking like a lost cause for Democrats. Arkansas has been slow to shift to the right over the past several years, but elections in the state house have shown that the state is decidedly more Republican. The New York Times Upshot blog has projected that the Republicans have an 81% chance of picking up the Senate seat.

Tom Cotton (R)
Challenger – Congressman, Arkansas’ 4th
Stances:
Voted against student loan legislation
In favor of full repeal of Affordable Care Act
Stated his support for a raise in the Arkansas minimum wage from $6.25 an hour to $8.50 an hour by 2017
Favorability: 37%
Fundraising: $7.1 million

Senator Mary Landrieu is facing a race for her political life. Polls of likely voters show her down several points to challenger Bill Cassidy. There are some signs of hope for her camp. A recent Gallup poll came out showing that 45% of Louisiana voters identify as Democrats whereas only 41% identify as Republicans. In many of these races, the Democrats will only have a fighting chance at their seats if their Get Out The Vote efforts work well enough. The conundrum for both candidates, particularly Landrieu, is that if neither candidate receives 50% of the vote, there will be a runoff in early December to decide the Senator. Polling shows Bill Cassidy would easily defeat Landrieu in such a face-off.

Iowa is considered one of the three states that are essential for the Democrats. Ernst managed to fend off a crowded primary battle to make the general election ballot. Both candidates participated in a feisty debate on Sunday, September 28th, where Braley and Ernst shared personal attacks more often than they shared their own respective opinions. Braley accused Ernst of being funded by the Koch brothers while Ernst compared Braley to being too loyal to President Obama.

Joni Ernst (R)
Member of Iowa Senate
Stances:
In favor of repeal of Affordable Care Act
Opposes increase in minimum wage and state wage
Considers privatization as a possible future of social security
Put forward a bill that ultimately failed in Iowa State Senate that would have defined marriage as between a man and a woman
Favorability: 36%
Fundraising: $2.53 million

New Hampshire has historically swayed back and forth between Democrat and Republican control. In 2010, the Senate seat up for election went to Republican, Kelly Ayotte, as both Congressional districts went to Republicans as well. The tide changed in 2012, however, when Barack Obama returned the state and both districts to Democratic hands. Though the race remains heated between Sen. Jeanne Shaheen and former Massachusetts Senator Scott Brown, the New York Times Upshot blog has the race pitted 91% in favor of Shaheen.

Scott Brown (R)
Challenger – former Senator from Massachusetts
Stances:
One of five Republicans to vote for Democratic Jobs Bill
Voted against Middle Class Tax Cut Act of 2011, which would have cut taxes on over 100 million people through a 3.25% increase on incomes over $1 million
Supports limited use of enhanced interrogation techniques
Supports two-state solution for Israel and Palestine
Supported Massachusetts health care reform but opposes the Affordable Care Act
Favorability: n/a
Fundraising: $3.69 million

Alaska’s Senate race is looking increasingly difficult for Democratic incumbent Mark Begich. He is continuing to lose ground in a Senate race where he was polling ahead of Sullivan only months ago. To make matters worse for the Democrats, Sen. Lisa Murkowski, the popular senior Republican senator from Alaska, recently vocalized strong support for Sullivan.

Michigan is another state that has been hard to predict in the past few election cycles. It swung strongly Republican in 2010, electing a Republican governor by 19 points. Only two years later in 2012, it voted against Mitt Romney, electing Barack Obama by 10 points. As was the case in Louisiana, the Get Out The Vote effort is important for both camps, particularly for Democrats focusing on urban African Americans.

Chances are slim for Michelle Nunn to make enough of a splash in Georgia to be able to take back the Senate seat from the Republicans. However, the mere fact that she is making the race slightly contestable and forcing the GOP to spend precious campaign funds is a positive sign for the future of the Democratic Party in the Peach State.

One of the landmark races of the 2014 election cycle, the Senate race in Kentucky, features the Senate Minority Leader, Mitch McConnell, and the popular Secretary of State of Kentucky, Alison Lundergan Grimes. The contest has taken up the national spotlight with major media outlets enjoying the prospect of a potential challenger shaking things up for the highest-ranking Republican in the Senate. Contrary to what many believe will end up being a toss-up, the same state that produced libertarian Senator Rand Paul will likely reelect Republican Mitch McConnell.

Colorado is perhaps the closest Senate election in the current cycle. Sen. Mark Udall has been painting challenger, Cory Gardner, as out of touch with women’s issues in order to win over more of the female base. At the same time, Cory Gardner has been accusing Sen. Udall of not taking the domestic threat from ISIL more seriously. The state is seen as a bellwether for the national mood as both campaigns use much of the same rhetoric that has been repeated around the country.

*All polls taken from RealClearPolitics

Although fascinating, the Senate midterms are not very surprising in terms of the direction of the political swing. Statistically, during a president’s sixth year in office, his party tends to lose ground in Congress. If the Democrats can turn out voters for their candidates and work their fundraising edge enough, we very well might see them beating out expectations and holding onto the Senate or even pushing it into a tie. If the Republicans can steal enough seats while also defending some of their own, then we will likely see a change in power come January. Regardless of the outcome, it is likely that the next Congress will be just as, if not more, ineffective as the current one.