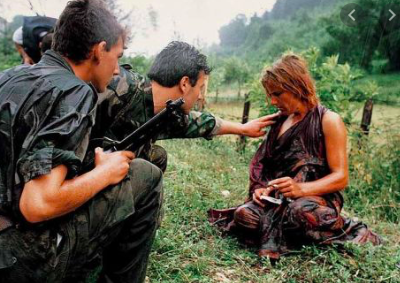 Imagine living in a war-torn country, trying to find any way to survive. You see a soldier from the other side. Instead of killing you, he horrifically forces himself upon you, ripping away your innocence. All of a sudden, you no longer want to find a reason to live through this war. Unfortunately, this was the harsh reality for many women living in the Balkans.

From 1991 to 2001, Yugoslavia was the setting of savage wars, the deadliest of wars in Europe since the Second World War. The Socialist Federal Republic of Yugoslavia was formed in 1945, when Josip Broz Tito came into power, which included 6 republics, Serbia, Montenegro, Slovenia, Macedonia, Croatia, and Bosnia and Herzegovina, as well as two additional provinces, Kosovo and Vojvodina. Within this region, there were many clashing cultures living in one area, which ended up being disastrous. This was especially exacerbated due to Serbia’s entitlement to the land and the people in it, specifically to Kosovo’s land. In 1990, the first moves of a war had taken place; Slovenia and Croatia decided to declare independence from Yugoslavia. Slovenia broke away with very little conflict since its population was not ethnically diverse at all and Serbia had no issue letting go of it. However, this was not the case with Croatia, seeing as 12% of Croatia’s population is Serbian; Yugoslavia fought hard against its secession for the next four years, the start of the Yugoslav Wars. As Croatia moved towards independence, it had no choice but to evict most of its Serbian population.

In 1992, Macedonia broke away without a problem. Bosnia and Herzegovina tried to declare independence, but, being that it was the most ethnically divided, even more war erupted. Tens of thousands of innocent souls were taken, and in the end, the country pretty much dissolved into three areas, each consisting of a different ethnic background. That same year, Serbia, the most powerful of the republics, separated itself under the leadership of Slobodan Milosevic. He planned to overtake the province of Kosovo, as well as whatever other land he could get. He figured if he could get those two provinces under his power, the republics would want to come back because there was now a strong central government. That is why he stripped Kosovo of all its autonomous rights. He forced the province to get rid of its religion, its language, its schools, and its culture. Basically, he wanted Kosovo to become Serbian. When the Kosovar Albanians refused, war broke out, and Serbia started the ethnic cleansing of Kosovo, sending thousands of men, women and children into refugee camps, where conditions were brutal and food was a luxury. Many decided to flee the country. Finally, in 1999, NATO intervened, bringing peace into the area.

This war, virtually unknown, is filled with atrocities. Many innocent people were stripped of their homes and cultures, the things that made them ‘them,’ the things that made them human. The reality of it is that the Yugoslav Wars were filled with severe war crimes. The Serbian army was only interested in taking back their “rightful territory,” and this was to be done by any means necessary. This included pillaging, burning people’s homes, brutal killings of innocent civilians, and, above all, the raping of countless Albanian, Bosnian and Croatian women. They would violate mothers, teenagers, and children because they had the power to do so, and no one told them to stop. To them, it was a part of their duties. It has been estimated that over 70,000 rape crimes occured, mainly at the hands of Serbian soldiers. This means that over 70,000 women have to live with severe mental and physical trauma for the rest of their lives, as well as the knowledge that they will probably never get justice.

Unfortunately, there is a stigma that comes with being raped, especially in the Balkans. Women cannot freely share their experiences. In that culture, it is known that only a married man and woman can be together; there is no tolerance for extramarital relations. Therefore, there is a sense of shame to women who are raped, thinking that they “asked for it.” They do not want to lose their husbands and families, so they suffer in silence. Especially being raped during times of war, women feel immense terror in exposing their reality and naming the men who attacked them for fear of retaliation and death.

This problem is not exclusive to just Kosovo, Bosnia and Croatia. Thousands of unpunished rapes during times of war haunt women all over the globe. Sudan, for instance, is filled with women who are survivors of these attacks. This country has been in a constant state of war and military conflict, specifically between 1983 and 2005, which was the time of the Sudanese Civil War. During this time, there were countless women and girls who were gang-raped on the streets or who were kidnapped to serve as sex slaves, a common story for the Balkan women as well. Similarly, the perpetrators of these heinous crimes are never caught. There is no urgency to provide justice for the victims.

In 2008, the United Nations passed Resolution 1820 which stated that rape as a weapon during times of war is, in fact, a war crime. This means that individuals can no longer get away with their decisions to force themselves onto helpless women as an abuse of their power because it is now recognized as a torturous method of war. The UN went even further, adding Resolution 2467 which made the state itself, in this case Serbia, responsible for the war crimes that occurred on its territories. Though these seem like strides in getting justice for women who were violated at the hands of soldiers, little to nothing has come of it. More often than not, the rapists have been able to live freely in their country without any sort of punishment; they probably think that they did nothing wrong. No one is enforcing any of these laws; Serbian soldiers are walking around unpunished, which is why people have taken matters into their own hands.

On Tuesday, October 29, 2019, we witnessed one of the biggest protests seen from Albanians, Croatians and Bosnians, as well as other supporters, at the #RallyForHERJustice protest just outside the Consulate General of Serbia. Many took to the streets of New York City to voice their disapproval with how no one is forcing the rapist soldiers to take accountability for their actions. This is not the first time something like this has happened.

Vasfije Krasniqi-Goodman, a rape survivor from the Yugoslav Wars, has even “testified in May at the US House of Representatives’ foreign affairs committee that Washington should do more to hold Serbia accountable for wartime crimes.” Her story is just one of many. At only sixteen years old, she was ripped away from her house by two Serbian officers. Rather than planning on what to wear the next day or how to make time to see her friends, she was instead forced into womanhood by these men who were passing her around like a subhuman creature. For years, she suffered in silence. Then, she decided to speak up, but to no avail. The Kosovo Supreme Court acquitted the two rapists, and, due to prejudice, she is no longer allowed to take the case to trail again lest she finds new evidence against them. 20 years after the fact, there is no chance she will ever find new evidence.

Hers, like many others, is just another story to be swept under the rug. Because it happened so long ago, do these women not deserve justice? For me, this is personal. My mother and father came here as refugees from Kosovo because of these wars. For years, I have heard horrific stories about children being torn to pieces in front of their mothers and young girls, no more than ten, being raped while their fathers were forced to watch. For years, I held these stories with me while everyone around me knew nothing about this. It seems unbelievable that something like this happened, and no one knew. But now is the time for amends. The #MeToo culture we have in this country has given a voice to thousands of victimized women who were finally able to share their stories. The same ardency for justice needs to spread to other countries, not just Kosovo, Bosnia and Croatia, but all countries where women are told that their stories, their pain, their lives do not matter. To bring attention to the victims of these crimes, we can acknowledge the reality – the bitter, tragic reality – of what happened. Just passing resolutions is not enough; words on paper do not help women get justice. The lack of action that has thus far taken place in regard to the rapists in Serbia continually perpetuates the idea that rape is a war tool.

Rape is not a war tool. Rape is a war crime.