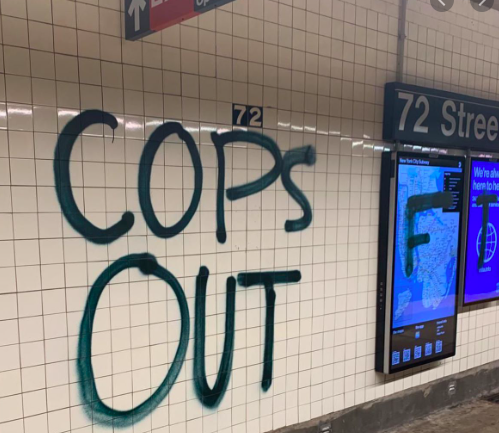 On January 31, an organized, unsanctioned protest occurred in Grand Central at 5pm. The protest’s organizers have a platform with many concerns surrounding treatment of people of color within New York and on a broader, even international scale; this protest in particular, focused on the goal of removing MTA police from the subway system. There are many reasons as to why cops in the subway are a problem. One reason is that many members of the New York City public have expressed concerns about the 500 extra cops in the subway system that will cost the MTA $50 million a year to which the MTA and NYPD have failed to respond. Another reason is that the subway is a prime location for racist police brutality. The police have been recorded on many recent occasions using excessive violence against people of color who don’t pay $2.75, immigrant vendors in the subway, and even homeless people of color simply waiting for their train. The third reason is that it doesn’t matter if we pay the fines and the $2.75–the problem isn’t us, it is the corporate structure. The problem is much broader and more complex than fare invasion; it is the mismanagement of the budget since the 90’s, the blame game between MTA and governor that followed, and Wall Street’s involvement. The protest acts like a platform for our grievances–the untimely death of Adrian Napier, a 19 year old from Brooklyn who died in the hands of the cops for fare evasion. Technically a crime, but similar to jaywalking, in that it is a petty crime that disproportionately affects people of color.

The narrative surrounding this particular protest involves many different players, each of whom brought in their own personal agendas, which makes the situation complex. I am disappointed at the way the news covered the event because it makes efforts at the protest look bad and easily dismissable as ‘childish’ or ‘unnecessarily violent.’ Drawing upon my personal experience, I can confidently say that it was none of those things. Nevertheless, it is interesting to see what a large organization like NBC New York or CBS New York has to contribute to the narrative. NBC New York was concerned about the arrests happening at the protest while CBS New York associated the protest with random acts of violence to mislead the public into siding with the police force. My overall experience at the protest does not fit within the general narrative about the protest because I was not attacked by the protestors. In fact, the feeling of communality was felt by all of my friends and I. We were encouraged by the protest leaders to have each other’s backs. Finally, the protest did not meet my expectation in a good way. It easy to believe the public message and dismiss your own experiences; however, it would be wrong to encourage that behavior. Anybody’s message is deeply intertwined with their worldviews, prejudices, personal beliefs, and socioeconomic background. If that is the case, then my experience is unique and counts; it deserves to be read.

The first public message regarding  the protest came from the NYPD Chief of Department Terrance Monahan on the morning of the protest. “‘This morning, a group of individuals vandalized subway stations. We believe the same individuals will attempt to disrupt the evening commute by causing disorder, endangering commuters – and even attempting to physically assault our officers. IT WILL NOT BE TOLERATED,’ NYPD Chief of Department Terrence Monahan said on Twitter” The tweet attempted to predict future events, painting the future as chaotic and dangerous with strong language that would inspire fear in the public. Even if the public did not feel the intended fear, his message was misleading and provocative, as if the protest was something frightening, as if we were supposed to bring chaos and danger to other people’s lives. This was not the entire case. We received public support; the majority of us stayed in the crowd and were non-violent. The day before the protest, he spoke again. “In an internal memo obtained by NBC New York, NYPD Chief Terence Monahan on Thursday told command staff, “While we will always protect people’s right to protest, illegal conduct that puts law-abiding community and cops in danger will not be tolerated in New York City”. So, my friends, who were not putting the law-abiding community and cops in danger, were arrested.

To me, the protest symbolizes a small step that we, as citizens, can take to be part of the revolution for a better society. During the protest, the pedestrians on the sidewalks cheered us on–one person came up to us to call us “brave.” Others, in cars, cheered us on by putting up their fists as a sign of solidarity. During the protest, I remember feeling anxious during the times when I felt threatened by the police. I felt the magnitude of their power over me, the individual. At any time, they could arrest me. In contrast, I felt empowered as I chanted or marched or linked arms with my fellow comrades. I felt safe in the crowd because the police couldn’t arrest us all. After the protest ended, I was in disbelief that my friends got arrested. It all happened so quickly. One moment, they were walking and chanting with the rest of us and, the next moment they were in the armed police truck, on their way to be processed. They went from walking to being arrested. The message that protests are violent and unsafe was proved wrong that night. The police had out their batons, ties, and drove in police trucks. They barracked subway lines, forcing us to continue walking on the streets. One of them went undercover during the protest. Another cop sneaked up behind a friend and I and yelled threateningly to get off the street–he was taller than six feet and huge. If he had arrested me, I would have had bruises on my arms. They caused agitation. For that reason, I felt unsafe being around them.

The public was told to expect something much more violent and chaotic; we were going to cause chaos, violence and terrorism in the city during rush hour. Even though the magnitude of the situation is based on the worldview that you hold, the rush hour commute was not stopped. Depending on how you view the police, you will view words on a wall as the destruction of property or minor graffiti. The police department used their power and influence on social media to manipulate the public into fearing the protest to fight back against the activists. They have linked random acts of violence with direct action, which is a deplorable propaganda tool. Mainstream news outlets repeated the message, furthering their cause. News outlets almost never actually focused on our messages. The lack of unbiased news in the media shows that each media has a worldview that they promote, while we, the general public, depend on them to stay informed. It is in their best interest to divert public attention away from budget mismanagement and Wall Street involvement and towards the poor, people of color, and immigrants. For years, the marginalized groups of people in America have been blamed for everything–they could be called the ‘scapegoats’ of America. Indeed, as long as we believe that fare invasion is the problem, the worldview that justifies inequality will perpetuate. The hidden agenda is a cynical one–to get rich. These facts were twisted to shape the demonization of the right to protest against police in the subways because our agenda is to expose the malpractices that have been happening for three decades.