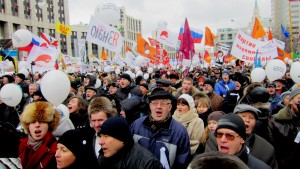 In 2011, Time Magazine revealed “The Protester” as its person of the year. This was fitting based on the significance of the Arab Spring, Occupy Wall Street movement, protests in Europe, and interestingly enough, the protests in Russia that began in the final month of the year. I say interestingly enough because hardly anyone could have foreseen the gathering of more than 50,000 people near the Kremlin to voice their dissatisfaction over the fraudulent presidential elections that revealed Vladimir Putin as the winner. Though this number appears as only a fraction of the roughly 13 million people living in Moscow, its significance should not be undervalued because a protest this large has not occurred since the collapse of the Soviet Union. Russia’s civil society is typically characterized as passive and ineffective.

Those who are familiar with the history would argue that this has been the case for centuries, as strong government blindly led the Russian people, and any sign of disapproval—even in small apartment gatherings—resulted in arrests and physical attacks during the Soviet regime. In the past several years, Russia’s civil society has been growing more and more influential, but is still largely unheard of, or overshadowed by the government’s hold on power in the country. However, the people’s new shift in attitude and willingness to make their voices heard sheds a bright light on the presence of civil society and an emerging challenge for Vladimir Putin and the future of Russia’s leaders.

Today, Russia’s civil society consists of over a thousand nongovernmental organizations that work on a variety of issues, from environmentalism to social work, from fighting corruption to defending human rights. During his time in office, Putin has been quite wary of the organizations. According to Human Rights Watch, he has wanted to limit their presence by enacting NGO legislation designed to “control independent groups by strangling them in kilometers of red tape” or claiming that his critics are funded by foreign enemies of the country. Threats against activists range from legal ones, designed to ruin their reputation or financial capabilities, to severe ones such as beatings or murder. Some of the most notable cases include the deaths of journalist Anna Politkovskaya in 2006 and human rights activist Natasha Estemirova in 2009 who were both killed for their work in challenging Chechen authorities. Other cases reported possible criminal conduct by officials, prison abuse, and physical attacks by local police. The Daily Mail reported journalist Mikhail Beketov was among a group of activists who were attacked by local police and random thugs while trying to prevent the destruction of the Khimki Forest near Moscow. The brutality left him wheelchair bound and unable to speak.

It is important to note that not every organization faces the same vicious fate as the ones mentioned. Some argue that the government has embraced their goals and certain changes have been implemented. Marina Pisklakova is the director of the ANNA National Center for the Prevention of Violence, an organization established to protect Russian women from domestic violence. She successfully established homes for women who leave abusive partners and set up the first toll-free phone number women can use to report abuse. According to her, in reference to her organization, “We are accepted by government agencies as an equal partner in responding to violence against women”. However, there are differing views among activists regarding their effectiveness. Sergei Kovalev, the first human rights commissioner of Russia after the collapse of the Soviet Union, believes that a “truly robust civil society would challenge the current Russian government as thoroughly ‘illegitimate’”, but complains that activists are largely marginalized.

The truth is that there is a wide disconnect between Russian citizens and the organizations that are trying to fight for their needs. This disconnect is often actively maintained by the government so that it appears legitimate and grabs support. Many Russians simply do not know about the activities of their own civil society because Russian television is under tight government control. Furthermore, many newspapers and radio stations are still unwilling to criticize the country’s leadership or to bring to light the work of human rights organizations for fear that they will pay for it later on. The key for more awareness is the role of the Internet in the country, which remains uncontrolled by the Kremlin. Russia’s citizens use the Internet more widely than any other European country, and it has been a popular tool for mobilizing protesters in the December 2011 demonstrations. Unsurprisingly, many of the protesters were young people, who have access to social networks and news outside of the country.

With the Internet as a useful tool, many activists are trying to engage and inform citizens in creative ways. Popular underground rapper, Noize MC, uses politically charged lyrics in his songs to inform young people about issues such as corruption, police brutality and political parties competing for power. One of his most popular songs, called “Restore Justice (Mercedes S-666),” is about the vice president of Lukoil, who was responsible for a fatal hit-and-run accident that was never reported. The song caused a lot of public outrage and provided yet another reason for the growing criticism of Russia’s government. Other activists, such as Artem Loskutov and Julia Bashinova, started a new type of political protest. This protest, called a ‘monstration’ was first held in 2011 in Novosibirsk, Russia’s 3rd largest city. Protesters gather in places typically reserved for demonstrations, except instead of being overly political, they carry signs that say absurd and non-political things such as “Wear a mustache!” and “If it weren’t for legs, I wouldn’t be here”. Some slogans play on those from the Soviet era, such as “Work! Peace! Amoeba!” (Human Rights Watch) Authorities typically do not know what to make of them, but sense they are somehow being ridiculed. This type of protest spread throughout the country and is popular because regular anti-Putin protests often end in arrest and mistreatment.

The role of Russia’s civil society has not reached its potential yet and there is still a struggle ahead when it comes to uniting the population to achieve desired reforms. With Putin winning the March 2012 election, many NGOs are worried that their work will be undone with tighter media controls and stricter laws against their organizations. Protesters have mixed opinions about the re-election, ranging from frustration to a sense of defeat to uncertainly about the years ahead. Some claim that if Putin continues to ignore the standards of democracy and undermine the urgency of demands for change coming from the public, he will not last in office. One thing that is certain, however, is that Russia’s civil society no longer remains passive in the shadows of government and its citizens have a voice that they demand be heard.

Maria Chekmeneva was a political science student at Fordham Graduate School of Arts and Sciences.