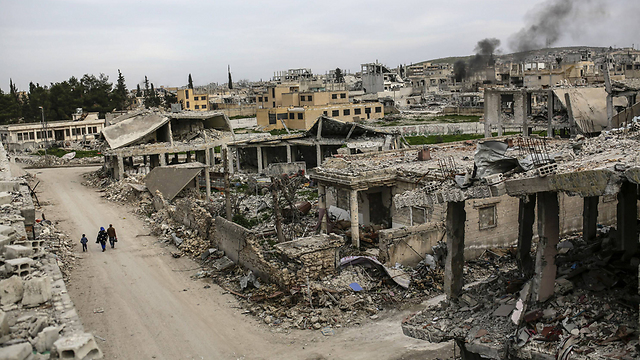 The conflict in Syria has no end in sight, but recent events have provided prospects for peace with some glimmers of hope. The Feb. 27 ceasefire has helped humanitarian aid reach some 150,000 people in besieged areas. On March 14, Russian President Vladimir Putin announced the surprise withdrawal of most Russian forces in Syria. And the self-proclaimed Islamic State has been losing strategic ground in Iraq and Syria, most recently when Syrian army forces took Palmyra; meanwhile, U.S. strikes kill about one Islamic State leader every three days.

These are qualified glimmers. The Syrian civil war has claimed up to 470,000 lives, though the United Nations stopped counting a year and a half ago at 250,000. The Syrian government has been stalling aid deliveries as of late. The ceasefire is fragile, and Russian planes were still flying around two dozen sorties a day not long after the withdrawal announcement. Moreover, the Syrian government under President Bashar al-Assad, which recaptured Palmyra, has committed innumerable atrocities, such as executing chemical weapon attacks and dropping barrel bombs over Aleppo and other areas. Earlier this year, Russian air strikes were also decimating Aleppo, causing tens of thousands of Syrians to flee Aleppo toward the Turkish border.

In particular, the partial withdrawal of Russian forces from Syria makes establishing a safe zone, a no-fly zone, or a humanitarian corridor — arguably important steps toward a lasting peace — a more tenable proposition. The Obama administration has repeatedly rejected calls for a no-fly zone, though Hillary Clinton has endorsed this more aggressive approach.

Much of the opposition to establishing a safe zone or a no-fly zone in Syria has been based on the dangers of increasing tensions with Russia. If Russian planes violate the no-fly zone, critics question, would the United States shoot them down? The risk of a direct confrontation with Russian warplanes was deemed too great, especially because Russian air strikes killed over 1,700 civilians between September 2015 and early March — a number that is probably higher than the number killed by recent Syrian government air strikes.

Moreover, plans for a humanitarian corridor or safe zone usually consider placing it in the twenty-five to thirty miles between Aleppo and the Turkish border. Although Moscow did execute heavy airstrikes in Aleppo in support of the Syrian government during the Northern Aleppo Offensive in early February, large numbers of its air strikes, especially last year, have been conducted in Idlib, where rebel groups made major gains last year, and flown out of Latakia airport. Extending the no-fly zone south of Aleppo, where large numbers of civilians have been killed by all factions, would risk putting American aircraft at greater risk of direct confrontation with Russian warplanes and of strikes by antiaircraft weapons.

Finally, the creation of a safe zone or humanitarian corridor in northern Syria would require significant U.S. military involvement, almost certainly meaning boots on the ground. And there is little appetite or political will for additional American entanglement in a Middle East war.

The withdrawal of Russian military forces as well as the gains made by the Syrian government around Aleppo in February could change this calculus. With a lower possibility of direct U.S.-Russian military confrontation, the United States decreases the risk of a major international incident when enforcing a no-fly zone. Furthermore, reduced Russian military involvement could weaken government forces that would oppose the creation of a safe zone or humanitarian corridor bolstered by a no-fly zone. Finally, the Syrian regime is tightening its grip around Aleppo, one of the most strategically important cities in the war, and has severed supply lines from Turkey into Aleppo, raising fears of a humanitarian crisis with hundreds of thousands of Syrians besieged. Government control of Aleppo would solidify the regime’s control over most of western Syria (with the exception of Idlib province) and would constitute a major shift in the balance of power of the war.

If a safe zone is to be created, the time is now, argue Nicholas Burns and James Jeffrey, former U.S. diplomats, in a Washington Post op-ed before the Russian military withdrawal. They argue that it would stem the flow of refugees that is putting great pressure on European countries and, even more so, on Syria’s Middle Eastern neighbors. A safe zone and humanitarian corridors would also provide peace, security, and humanitarian aid to Syrian civilians, who have seen too much violence. Finally, although Burns and Jeffrey do not argue this, a safe zone could also provide a space for serious political opposition to organize in Syria, just as some hoped would happen in Aleppo when opposition forces took that city in 2012.  All these arguments are strengthened by a major reduction of Russian military force in Syria.

But the creation of a safe zone or humanitarian corridors near the Turkish border in northern Syria (which the Turkish government has supported) would come with substantial costs and risks. To effectively protect a safe zone or a humanitarian corridor against the Islamic State and other Sunni terrorist groups, Syrian government forces, Hezbollah, and Iranian-backed Shia militias, the U.S. military and its allies would likely have to send thousands of ground troops. A UN peacekeeping operation (PKO) could be deployed instead, but PKOs are subject to UN Security Council approval, and there is little chance that Russia would not veto the deployment. Effective enforcement of the safe zone or humanitarian corridors would be especially important because they would likely become attractive targets for terrorist groups such as the Islamic State and Jabhat al-Nusra, the official al-Qaeda affiliate in Syria. The Syrian civil war and the siege of Aleppo inevitably raise comparisons with Bosnia and Sarajevo. Calls for safe zones recall the massacre of eight thousand people in the purported safe zone of Srebrenica. Creating a safe zone runs a great risk of worsening the humanitarian crisis. And it certainly would increase American involvement in Syria for years to come, especially if events take a turn for the worse. As Colin Powell’s Pottery Barn rule for foreign intervention dictates, “You break it, you own it.”

As Ella Fitzgerald once sang, “Something’s gotta give.” Unfortunately, it seems now that in Syria that something may be the opposition in Aleppo. But there are no good policy options in Syria. In a recent essay in Foreign Affairs, Kenneth Pollack gave perhaps the best advice. The United States should either step up or step down its involvement in the Middle East — but either would be better than muddling through.