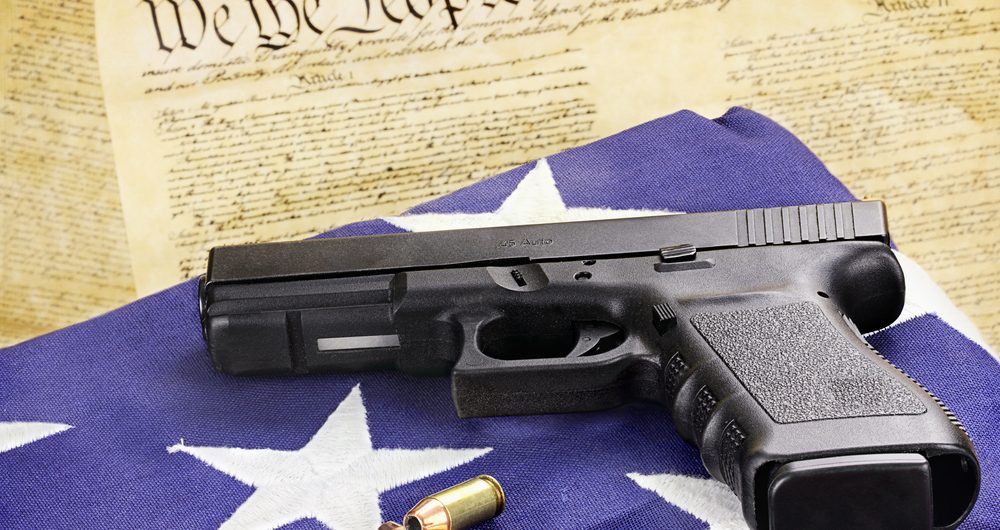 The recent rise of gun violence in America has caused many to question the constitutionality of individual citizens’ right to own and carry firearms. Individuals who favor gun rights find their constitutional support in the Second Amendment, a constitutionality upheld by the late Justice Scalia in District of Columbia v. Heller. However, individuals who oppose gun rights argue that the Second Amendment only granted the right to form a militia back in the founding era. Justice Stevens discusses the latter argument in his dissenting opinion of District of Columbia v. Heller.

However, there is a possible way to defend the constitutionality of the right to bear arms without appealing to the Second Amendment. It’s called the substantive due process clause.

As Dr. Saul Cornell, the Paul and Diane Guenther Chair in American History at Fordham University points out that perhaps the place to look for right to bear arms is not the Second Amendment, but the Fourteenth. Could it be possible for the right to self-defense to be protected by the Fourteenth Amendment’s substantive due process clause, which reads: “No state shall make or enforce any law which shall abridge the privileges or immunities of citizens of the United States; nor shall any state deprive any person of life, liberty, or property, without due process of law.”

This would mean that because there is no explicit mention of owning firearms for the purpose of singular self-defense in the Constitution, it is considered an unremunerated right. Thus, it could potentially be discussed as a substance due process claim.

However, in order to establish that a right is protected by substantive due process, according to Palko v. Connecticut, it must be established that the right is fundamental, i.e., deeply embedded in American traditions and essential to the scheme of ordered liberty. The ruling concludes that if the 14th Amendment has absorbed a right, it must be believed that “neither liberty nor justice would exist if the right was sacrificed.” Plainly stated, self-defense would have to be necessary for the existence of liberty and justice.

There are three parts to a substantive due process claim: one, there must be a deprivation; two, it must be of life, of liberty, or of property; and three, it must be shown that the government has no adequate justification for depriving those rights. Using these three parts, it is evident that owning a firearm for self-defense is a right that could be protected under the Fourteenth Amendment.

First, it is important to realize the Founders not only recognized the fundamentality of the right to defense but also deemed it worthy of Constitutional protection. Putting the derived individual right to own a firearm aside, at the core of the Second Amendment is the protection of the citizens’ collective right to establish and serve in a militia. Ground Warfare: An International Encyclopedia argues the purpose of the militia was to protect American communities from attacks and was therefore “defensive in nature.” Therefore, by granting individuals the right to collectively defend by forming a militia, the Founders recognized the right to defend oneself, one’s family, and one’s property as a fundamental right and a liberty interest consequently warranting Constitutional protection.

The first question must be addressed as to the fundamentality of one’s right to self-defense. Self-defense is one’s autonomous way of protecting their person against harm. The instinct to preserve one’s life is perhaps the most fundamental action of human nature. Solidifying this statement, Dr. Boris Sidis writes in his article “The Psychopathology of Neurosis” that, “the fear instinct arises from the impulse of self preservation without which animal life cannot exist. The fear instinct is one of the most primitive and most fundamental of all instincts…rooted as it is in self-preservation – the condition of life primordial.” Dr. Sidis believes the ability to preserve oneself, i.e., defend oneself in the face of danger, is the most fundamental instinct of life, which fuels its continuity.

The philosopher Thomas Hobbes also views self-defense as a vital part of our humanity. He argues, “The worst that can happen to us is violent death at the hands of others. If we have any rights at all, if nature has given us any rights whatsoever, then the first is surely this: the right to prevent violent death befalling us.” Here, we see that Hobbes would agree with Dr. Sidis in that being able to preserving oneself is a foundational to human beings.

Surely, one must think that the species of human beings is made up of mere individual human beings. If there were no foundational impulse or right to defend oneself, what would happen to the species as a whole? Therefore, justice could not exist if self-defense was not protected, since, without self-preservation human beings – the empirical arbiters of justice – justice would cease to exist.

In order for justice to exist, humans need to exist. Since self-defense is essential to human existence, it must therefore be a fundamental right.

Next, in order for a right to be protected under the Fourteenth Amendment, it must be the case that if the right were sacrificed, justice could not exist. Having shown justice could not exist without self-defense, the right to defend oneself is therefore protected under the Fourteenth Amendment and is subject to substantive due process.

Yet, if these conditions were screened for and proved to be absent in the gun owner, the government would have no justification for depriving the individual of their firearm. This would mean if a person received a state certification and permit showing they could safely and efficiently handle the weapon, if there were no evidence showing they posed a threat to innocent citizens, and if they were deemed mentally sound, the government would have no substantial reason for depriving the person of their firearms.

What happens if individuals do not feel they can adequately defend themselves against attack by physical means alone? If they feel they are too weak or too small to sufficiently counter a physical attack? Surely these individuals are still are entitled to the right to defend themselves. For reasons similar to this example, small handguns, such as pistols, should be able to be legally owned for the purposes of self-defense. If the right to defend oneself is a fundamental right, the right to own a small handgun for the purposes of self-defense is also a fundamental right as proper knowledge of how to use it ensures one the adequate ability to protect themselves and their families from harm.

Therefore, because the urge to protect oneself from harm is a fundamental aspect of human nature and is necessary for the existence of humanity, self-defense could be considered to be a liberty interest and a fundamental right. In the same line of thought, owning a small firearm for the purpose of self-defense warrants protection under the Fourteenth Amendment’s substantial due process clause. By taking on this argument for the right to bear arms, gun-right advocates can safely abandon their appeals to the Second Amendment while maintaining Constitutional protection of their right to self-defense.