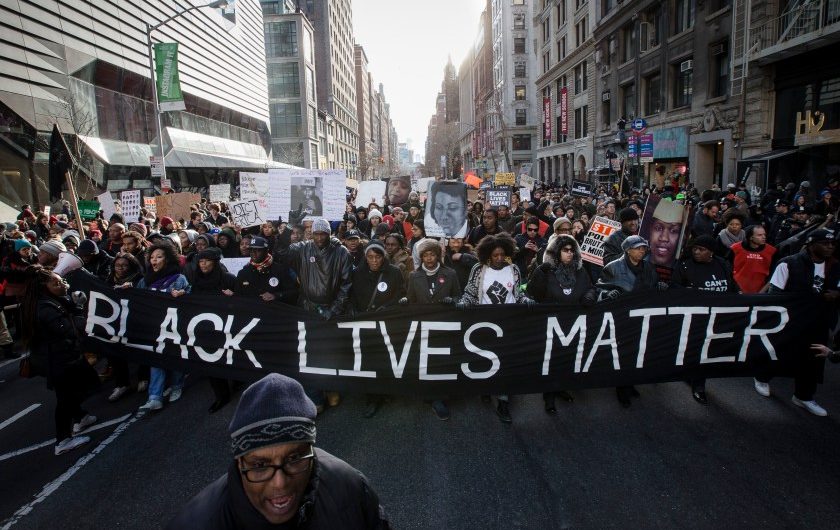 In December of 2014, after a week of nationwide protests over the shooting of unarmed 18-year-old black teen Michael Brown, President Obama requested a total of $263,000,000 from Congress to mitigate police brutality. The requested 263 million would enact what BBC News calls the “Post-Ferguson Plan”:  greater regulation over police practices through a “task force,” stricter governance over the acquisition and use of military equipment by the police, and – most strikingly – over 74 million dollars of the requested budget to be spent on up to 50,000 body-worn cameras for police officers. However, after the July homicide of unarmed, convicted felon Eric Garner by police officers on suspicion of illegal distribution of cigarettes, would greater use of body cameras lead to any significant change? Explicit videos of Eric Garner being tackled to the ground by a group of NYPD officers quickly went viral, in which he desperately chants three words 11 times – “I can’t breathe.” The death of Eric Garner was ruled a homicide by compression of neck and chest a month later, even with clear video and audio of the incident, only one officer was charged and received no indictment or punitive recourse. Even with a pointed camera lens nearby, the death of this man was not ruled to be the result of any criminal wrongdoing. For this reason, I believe that more cameras are a superfluous solution to a persistent problem. Nevertheless, more attention is being placed by the Obama administration on mitigating police brutality than any other presidency. In general, Obama’s approach to police brutality has been incremental and progressive, culminating in his creation of the “Post-Ferguson Plan.” But can we expect such progress, however small, to continue after next year in a Post-Obama America? Today, America is in dire need of regulating and reforming the legislative and judicial systems that continually exonerate officers of the law, upon whose hands rest the myriad black lives lost at a rate unparalleled by any other ethnic group. The solution to this issue hinges on the direct address of the racial biases present in America today that are actualized in part by police brutality.

Since the Civil Rights Movement of the 1960s, incidents of extreme police brutality may have relatively decreased, but new cases of police brutality are continually compounding to this day. From the years of 2005 to 2012, a black person has been killed by a white police officer nearly 2 times every week – for an average of 96 times a year – according to incidents of justifiable homicide reported to the Federal Bureau of Investigation. Justifiable homicide is defined by the FBI as, “certain willful killings that must be reported as justifiable or excusable,” and is limited to either the killing of a felon by an officer in the line of duty, or the killing of a felon by a private citizen during the commission of a felony. According to the FBI, of the justifiable homicide victims in 2013 for whom race was known: 53.6 percent were black, 43.9 percent were white, and 2.5 percent were of other races. However, it is important to note how incomplete and downright questionable the statistics given by the FBI are. Race was only known for 4,112 justifiable homicides, which is a minute portion of – what one part of the FBI’s website indicates – the 12,253 justifiable homicide victims in 2013, and – what a “data” chart linked to another part of the FBI’s website indicates – 14,132 justifiable homicide victims in 2013. Even more importantly, multiple media outlets have noted that only a mere 750 of the nation’s 17,000-plus law enforcement agencies report statistics to the FBI’s justifiable homicide database, and they’re self-reported. Between the roughly 4.4 percent of the nation’s police departments providing self-reported data to the FBI, and the 33.6 percent – or 29.1 percent (who knows?) – of the justifiable homicides for whom race was known, what is left is an extremely limited view of the large incidence rates of black deaths at the hands of law enforcement.

Luckily, inquiring minds have found a more accurate statistical representation of justifiable homicide. By cross-referencing the National Census’ statistics on the racial identities of Americans, and arrest-related death data from the Justice Department’s Bureau of Justice Statistics (BJS), a more succinct statistical analysis can be found.  According to the BJS, there were about 420 arrest-related deaths per year on average between 2003 and 2009. While the BJS does not provide the annual number of arrest-related deaths by race or ethnicity, a calculation based on Census data shows that black people were about four times as likely to die in custody or while being arrested than whites (22.9 percent). This accounts for a total of 3.66 million black deaths at the hands of officers, as compared to 900,00 white deaths. Moreover, this discrepancy in excessive police force is most visible in densely populated urban areas – namely Las Vegas, San Diego, and New York – where the percentage of black citizens killed by police officers was at least double the percentage of blacks in each of the cities’ total population in 2007. Unfortunately, in the city I call home, New York City Police Department (NYPD) officers killed black persons three times more than they did white persons when averaged between the years of 2000 and 2011. Across the country, African Americans are overrepresented in cases of justifiable homicide. These numbers reflect an explicit bias police officers have in deciding when – and with whom – to use deadly force.

Police officers are shown great legal leniency and generally receive little to no punishment in cases of justifiable homicide. Arrests of police officers responsible for murder in the line of duty are rare, indictments of these officers are even rarer, and formal convictions – the rarest. Researchers at the Cato Institute studied allegations of misconduct for almost 11,000 U.S. police officers from April 2009 through December 2010. Of the nearly 11,000 cases, less than 30 percent (3,328) result in indictments, and about 10 percent – or 33 percent of those charged criminally (1,063) – were actually convicted. Another study conducted by the CATO Institute also found that convicted officers were sentenced to spend a little less than 1.2 years (14 months) in prison on average in 2010. More broadly, researcher and professor Philip Stinson examined 6,724 cases of police officers being arrested for committing crimes while on duty from 2005 to 2011. It was discovered that roughly 10 percent (664) of cases involved alleged use of a firearm; and of these 664 cases, approximately 5 percent (31) of these arrests involved murder or non-negligent homicide while the officer was on duty. In cases of justifiable homicide, of the judicial system often gives law enforcers the benefit of the doubt. Originating from the 1985 case of Tennessee v. Garner, “objective reasonableness” is the name given to the ambiguous discernment the courts assumes police officers use when exercising deadly force. According to the U.S. Supreme Court, the use of force must be judged “from the perspective of a reasonable officer on the scene, rather than with the 20/20 vision of hindsight.” While this approach might seem just and reasonable in theory, it allows for lamentably lax punitive jurisdiction in practice. As Laurie Levenson, a former federal prosecutor and current law professor notes, “it is really hard to convict a police officer…they get a super presumption of innocence. Once we strip away all of the facts and the figures and the statistics, what remains is an overt paradigm in which black people suspected of criminal activity are murdered, and their murders are erroneously reported and their murderers rarely reprimanded.” As Noureddine Amir, Vice Chairman of the United Nations’ Committee on the Elimination of Racial Discrimination (CERD) stated, “this is not an isolated event and illustrates a bigger problem in the United States, such as racial bias among law enforcement officials, the lack of proper implementation of rules and regulations governing the use of force, and the inadequacy of training of law enforcement officials.” This was stated last year, in a report published by the CERD that expressed deep concerns about the American judicial system, citing Michael Brown’s murder in Ferguson. During his last term in the executive office, President Obama employed considerable measures to mitigate the deleterious effect of police brutality on minorities.

Unfortunately, little has been done to address the systemic and demonstrable bias present in judicial rulings and the actions of law enforcement officials nationwide. In a perfect world, articles like this one would be superfluous in their reiteration of well-known facts. In a pragmatic world, the reporting of justifiable homicides would be regulated and audiovisual evidence of an unarmed persons of color being suffocated would be more seriously considered by our courts and officers made more responsible for their actions. I wholeheartedly believe police brutality and the inequalities surrounding it can be substantially lowered in the years after Obama leaves office. In our world, regrettably, the data from the past decade suggests otherwise.