Strict Standards: Declaration of Custom_Menu_Wizard_Sorter::walk() should be compatible with Walker::walk($elements, $max_depth, ...$args) in /home/s2ncq8pxua8t/public_html/wp-content/plugins/custom-menu-wizard/include/class.sorter.php on line 0
 The Disciplinary Actions of the NYPD – FORDHAM POLITICAL REVIEW
Skip to content
Latest News
The Virginia Governor’s Race and What it Means for the 2022 Midterm Elections
Kyle Rittenhouse’s Sixth Charge
Looking Back as President Biden Confirms 2024 Run for Re-election
Bill Cosby Trial and the Definition of Consent
The Trial You Didn’t Know Was Happening 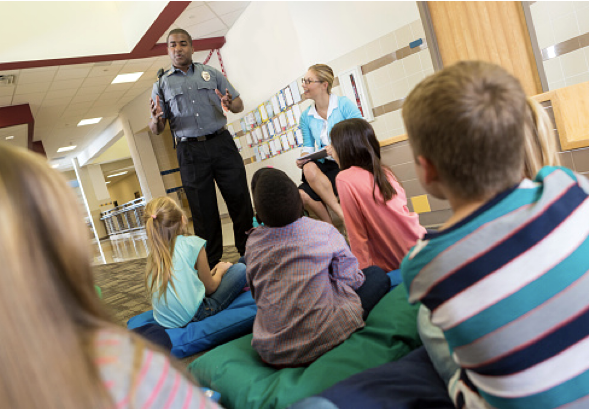 **A note from the writer: This column is an addition to the preceding “A brief history of the NYPD’s presence in New York City Schools.” Upon researching this topic, I quickly found that I would hardly be able to condense all of the influential factors of the NYPD in public schools into one 800-word column. As a result, I have decided to separate the information into a series of columns. The preceding column introduced a historical timeline of the NYPD’s rapid integration into New York City’s public schools. This week’s column will focus on the disciplinary authority of the NYPD, which will set the stage for the discussion of the effects of policing on students and marginalized communities in the following weeks.

One of the major questions concerning this topic is what constitutes delinquent behavior and how schools effectively discipline and prevent such behaviors. The Citywide Behavioral Expectations to Support Student Learning (the Discipline Code) is a document that describes, in-depth, the acceptable behavior for students based on age, a bill of the rights and responsibilities of K-12 students. It also details the appropriate disciplinary responses to combat said behavior. Acceptable behavior for all students includes but is not limited to: respecting others, school property and staff, attending class, following school regulations, and behaving in a polite and truthful manner (NYC Department of education). The appropriate responses to violations of these behaviors are listed under the “Progressive Ladder of Support and Disciplinary Responses” section of the document. Examples of acceptable responses include but are not limited to: collaborative problem solving, social-emotional learning, parent outreach, mentoring, intervention, health education, guidance conferences, suspension, appeals and transfers (NYC Department of Education). The focus of this document is on progressive discipline, meaning there is room for improvement within each student.

Despite the list of rules and criteria for de-escalating tense situations, delinquent behavior, and other minor school safety issues, the officers of the School Safety Division of the NYPD (including Safety Officers (uniformed officers patrolling in and around the schools) and precinct-based officers (officers wielding guns) do no receive additional educational training when it comes to operations within schools. As noted on the New York City Police Department government website, recruits are required to train for seventeen weeks in the police academy before they are allowed to become Safety Officers. This training is also mandatory for precinct police. There is no mention of further education or requirements for officers employed by schools. However, safety officers maintain the right to, “frisk, detain, question, search, and arrest individuals both on and off school grounds” (USCCR). A large problem, caused by the lack of education for the school environment, is the failure to adequately inform the officers of their responsibilities within the school. In the Memorandum of Understanding (MOU), it is stated that the police are to remove “unruly” schoolchildren; however, the term “unruly” is never explicitly defined. The officers are left to their own judgment on what constitutes this type of behavior. As a result, there have been many instances of unconstitutional arrests and excessive force used on children committing minor school violations. For example, under the Bloomberg administration, there was a lawsuit brought on by six public school students, on behalf of themselves and their peers, to challenge the governance of the NYPD in public schools (NCLU). One plaintiff, who was twelve years old at the time of the occurrence, recalled being removed from the classroom by Safety Officers for drawing on a desk. Following her removal, she was handcuffed and escorted to the school’s security office and searched by armed officers, without the presence of a school official or parent. Another plaintiff in the case was also subjected to unlawful arrest and assault by a Safety Officer. In this instance, the thirteen-year-old was told he needed to serve an in-school suspension for leaving the cafeteria without permission. When the child objected, he was grabbed by the hood of his sweatshirt by one officer and shoved against a wall by another. He was then detained. The boy did not resist arrest, in fact, he tried to comply by saying that he would willingly serve detention in the principal’s office if the officers would just let him go. Unfortunately, the other four reports are eerily similar to the provided examples. In each instance, officers demonstrate excessive use of force on young children for minor offenses due to a lack of proper youth educational training.