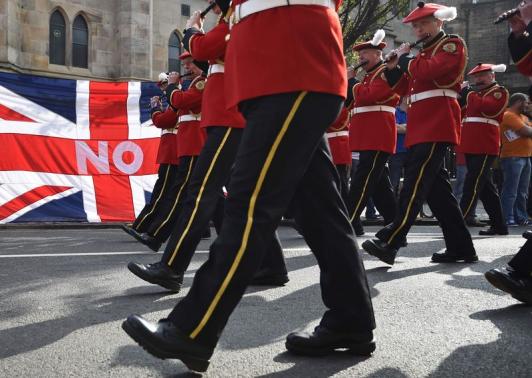 With the referendum for Scottish independence swiftly approaching on September 18th, the political tension between those who back the movement for independence and those who believe in a unified United Kingdom has come to a head.  Alex Salmond, the First Minister of Scotland and head of the “Yes Scotland” campaign for independence has taken to the streets, to television, and to any medium possible to spread the word about the strength and prosperity of an independent Scottish state. Naturally, he has been met with formidable opposition from both the Conservative and Labour parties who argue that the secession of Scotland would spell disaster for the value of the English pound and for the standard of living for the people of England and Scotland.

Salmond’s platform revolves around the claim that Scotland deserves to be ruled by its own people and that the English Parliament cannot accurately represent and respond to the needs of Scottish citizens. That claim is not unfounded, as there is currently only one Scottish member of the Conservative Party in Parliament. In a televised debate against Labour Party politician Alistair Darling on August 25th, 2014, Salmond praised Scottish progress after the passage of the 1997 Scottish devolution referendum and argued that complete autonomy would allow Scotland to further realize long-standing political goals. He mentioned that such autonomy would allow Scotland to “stop illegal wars and stop the poor and disabled from bearing the brunt of welfare cuts.” Such claims were met with hearty cheers from the studio audience. Indeed, those in favor of voting “yes” are quickly gaining ground. On September 6th, a YouGov poll revealed that for the first time there was a two-point lead in favor of Scottish independence. At such a late stage in the game, this revelation has made the idea of an autonomous Scotland seem more real than ever before.

As expected, many people are not reacting too kindly to such a proposition. A recent article in the Daily Telegraph denounced Salmond’s platform as “political street theater” and remarked that Salmond’s claims “have become steadily more ridiculous as the campaign builds to a climax.” Even prominent Scottish celebrities like J.K. Rowling have implored their social media followers to say “no thanks” to independence. On September 6th Rowling tweeted: “People before flags, answers not slogans, reason not ranting, unity not enmity #bettertogether.”

Though there has been some very tough feedback for Salmond, many of his claims are in fact very legitimate. An independent Scotland would be able to make legislation that better suits their needs. They would be able to represent themselves fully and they would not be at the mercy of another governmental structure. Having full autonomy would mean that in emergency situations decisions could be made quickly, efficiently, and in house. On an ideological level it makes sense for Scotland to be free, and it would certainly satisfy patriotic and nationalistic interests. With that being said, the best thing that could happen for both the UK and Scotland would be for Scotland to vote “no” to the referendum.

Quite simply, a break from the UK would raise serious economic questions, and those questions have not been sufficiently answered or explored. The first and most important issue is that of Scotland’s new currency. Alex Salmond is determined to stay on the pound, though that plan has been criticized heavily by proponents of the Better Together campaign. George Osborne, the British Treasury chief, has stated bluntly: “No ifs, no buts, we will not share the pound if Scotland separates from the U.K.” Salmond, however, is unwilling to take no for an answer and claims that no one can dictate what currency Scotland will use. That claim is valid; no one can stop Scotland from using the pound if they desire. However, entering into a currency union with the U.K. would come with even more challenges than they are currently facing. To start, Scotland would be operating on a foreign currency, which comes with certain limitations. They may not have total autonomy over their own budgets, and interest rates would be decided on in London, not Edinburgh. The Scottish people are asking for more fiscal autonomy but agreeing on a plan that by nature would give them less say in financial policy. In addition, pension plans and other social services are more secure when they are backed by the UK as a whole. Getting rid of the stability that comes with being a part of a large and relatively financially secure nation is a huge risk for a newly independent nation to take.

There is also the question of how Scotland will finance its new economy. Salmond claims that the tax revenues from North Sea oil will reach £54 billion by the years 2016-2017. During the debates on August 25th Salmond threw around even more hypothetical figures with reckless abandon. “In financial terms, [North Sea oil revenue] is worth one trillion pounds, that’s one thousand billion pounds in wholesale value, one thousand thousand million pounds, it’s a lot of billions, it’s a lot of money.” Regardless of the many and varied revenue proposals, the fact of the matter is that the North Sea oil business is in decline. Operations costs for drilling off of the coast of Scotland are skyrocketing, and oil revenues have been anything but steady for the last 15 years. For example, from 2008-2009 oil revenues (in millions) were £12,925, but that dropped to £6,491 in the period from 2009-2010. The oil industry by nature is a very volatile one, and using proposed oil revenue as a backbone for a budding economy is a risky proposition.

It would seem that this referendum is more than just a decision between independence and unity, but one between political sovereignty and economic stability. In this case the argument for Scotland not hurling itself into a void of economic uncertainty is stronger than the one appealing to more patriotic interests. As polls show, however, the gap between the “yes” and “no” votes is narrowing and so does the choice between economic prosperity and political gain. Simply by sparking and giving weight to the national discussion the Scots are getting a slice of the proverbial cake. On September 8th the New York Times released an article stating that the government would offer Scotland “more control over public expenditure, more control over welfare rates and a host of other changes” if they vote “no” to the referendum.

And why wouldn’t that be the case? Many people have a vested interest in keeping Scotland a part of the U.K. David Cameron doesn’t want to have the dissolution of a 300 year-old union on his transcript, and the Labour party doesn’t want to lose the political support of the Scottish people. The idea of a Scottish secession is driving down the value of the pound, and if a “yes” vote were to occur, there is no doubt that investors would react quickly. Thus the British people as a whole have an interest in keeping their currency stable. The recent polls have been a catalyst, and the British government is finally taking action and promising Scotland more autonomy. Scotland is in a political sweet spot; they have sparked a national debate and they are in a place where the U.K. is promising concessions. The best thing that could happen would be a “no” vote by a slim margin. Scotland would keep the economic stability that comes with being a part of the U.K. and gain the much needed talks with Britain about political and fiscal autonomy.